Book where boy doesn't have magic but everyone else does

I remembered reading a book about a boy who doesn't have magic while everyone does. His uncle is a famous wizard and helps him get into a wizard school. Later on, it Is revealed that the boy doesn't have magic because the uncle took it away when he was young.

Added: it was around 5 years ago when I read it. the cover of the book shows a little boy and on the background they have some flying pigs and castle-like structures.

Although it's not an exact match, your question has some vague similarities to the Codex Alera series.

his aunt Isana, who is actually his mother, at first unintentionally but then with more intent, surpressed all his fury ability and stunted his growth through watercrafting in a desperate bid to hide his identity.

I was looking for this as well. I believe the book is called Missing Magic by Emma Laybourn. They are flying sheep not pigs. It was published in 2012, which is two years off from your date, but otherwise matches. 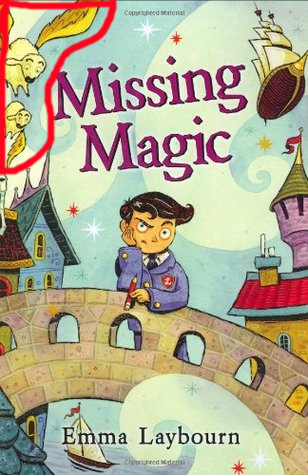 Thanks to his influential uncle Kelver, Ned’s gotten into an elite new school. But there’s a problem—everyone there can do magic. And Ned? Not a lick. Amidst whispers of the terrifying Necromancers (rumored to be kidnapping unsuspecting kids!), Ned struggles to adjust to his new situation, avoid making enemies, and jump-start his magic skills, all with very little luck. Then, just as he’s getting accustomed to having his hair turned into snakes and his books into bricks, the Necromancers strike! Ned and his classmates are kidnapped. But without magic, how can he possibly help them escape? Things can’t get any worse—until they do.

TV Tropes has an entry on The Magic Goes Away that mentions the uncle as the person who stole Kelver's magic:

In the book Missing Magic, a young boy has to deal with being the only one without magic powers. When his uncle turns out to have been the Big Bad (after taking his powers and killing his father) his uncle uses the same spell and removes everyone's magic by accident. The boy comes to realize that eventually magic will return and someone will pioneer its discovery, long after everyone forgets it existed and moves on.

Outcast: The Un-Magician by Christopher Golden 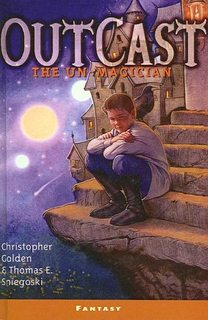 The most dangerous boy in the world? Timothy is a freak, a weakling, an impossibility. He's the only person in existence without magical powers and has spent his entire life hidden on a remote island. When Timothy is finally taken back to the city of this birth, he is fascinated by the current of magic that fuels the world, and mesmerized by the buildings and orbs that hang weightlessly in the sky. But he is also marked for death.

Assassins are watching his every move, and the government wants him destroyed. Timothy can't imagine what threat he could possible pose; after all, he wields no power in this world.

The cover does have a boy and some castle-like structures, and Timothy has no magic. His father was a magician. The book was released in 2004 (and according to some of the reviews, was based on an earlier book by the same author), so that would fit your timeframe. No flying pigs, though.

Not the answer you're looking for? Browse other questions tagged story-identification books novel magic wizards or ask your own question.

7
Identify the children's fantasy book where a boy lives among sea otters
10
A fantasy book where a young shepherd girl who comes back to her village to find everyone dead by plague
12
Medieval fantasy book where an evil sorcerer tried to use magic to make the new weapon, a cannon, explode
7
looking for a title of a book about a magicians apprentice
4
90's (?) chapter book: young boy creates a computer clone, switch places
10
Book about a castle full of portals to other dimensions, everyone there has some magic