Why were some lightsaber effects in A New Hope different quality?

In the below pictures, you can clearly see the difference of quality, when Luke uses Anakin's old lightsaber, its a pale green, almost pure white blade. Its like George Lucas forgot to send this scene to his cgi team and it never got the visual upgrades that Obi-wan's lightsaber did.

Anakin/Luke's Lightsaber was most definitely blue as seen in the 3 prequels and The Empire Strikes back, so for it to be that weird pale green or white colour, seems awefully strange that Lucas never upgraded its visuals. Was this ever address by George? 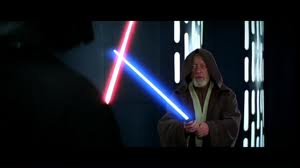 According to most blogs I read, this was basically special effects fluke. Some claim that his error is corrected in one of the menus on the bonus disc to the OT DVDs.

Remember that original props were all white (src: Wookieepedia)

Please note that the same linked page also shows differences between Vader's blade in some shots (white vs. red) being fixed

I always thought it was meant to indicate a mode of the light saber that was specifically for training, perhaps the blade wasn't as strong and wouldn't slice thru the training globe or a person or whatever else someone not used to a deadly weapon might accidentally hit with it. I figured those knobs and switches on the hilt must do something, so a white blade just means the power is turned wayyyy down for safety purposes!

What bothers me worse than the whitish blade in the practice scenes is the film jump from missing frames when Luke ignites his light saber in Bens hut when he first gives the saber to him. Why has Lucas never fixed this? It is easily the most distracting jump in the whole trilogy (worse than Han/Greedos unnatural jumps) and takes me completely out of the film everytime it happens.

They didn´t have the same technology we have now. Remember, this is 1977 this was made in. the original lightsabers were literally light running up a pipe powered by a cord running up their sleeve. Look up force saber if you don´t believe me. They have been going back and editing when technology advances so it doesn´t get to where it starts looking cheesy.

-8
Where is Obi-Wan's lightsaber?

31
What is the significance of the reversed colours of imperial and rebellion lasers compared to lightsabers?
31
How were the lightsaber effects done in Star Wars?
4
Are lightsaber blades a different material from blaster fire?
1
In The Force Awakens, why does the same lightsaber look different in different scenes?
138
How many times was Obi-Wan less than honest with Luke?
27
Is Anakin's lightsaber the only one remaining from the 'Clone Wars' era?
1
How did Luke get his lightsaber back after A New Hope?
9
Why did the colour of the blasters change between the Original and Prequel trilogy?
55
Why did Luke call the lightsaber by a different name?