Why does the TIE Fighter Poe Dameron and Finn steal have 2 seats and require a gunner?

Why does the TIE Fighter Poe Dameron & Finn steal have 2 seats & require a rear gunner?

The 2 TIE Fighters chasing them appear to only require 1 combined pilot and gunner each.

Is it the same model? It appears to be. If so it is at least possible for the pilot to also act as the gunner - which would seem the better choice as Poe is a highly experienced Pilot and they are in a life & death situation.

Further Poe is facing the direction of the guns they are firing at - he can see them - Finn has to rely on equipment.

Why get a neophyte who doesn't know what they're doing to be gunner?

This seems like an inelegant plot point that doesn't really make sense.

Those are not normal TIE fighters but designated TIE/SF (Special Forces) fighters. 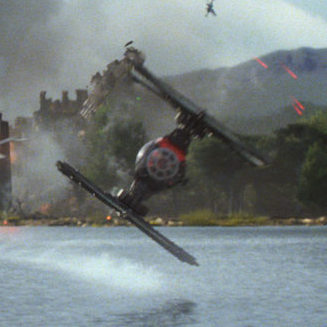 On the official Star Wars website, “First Order Special Forces TIE Fighters” are described as follows; bold emphasis is mine:

A two-seat strike fighter used by the First Order’s elite Special Forces pilots, the TIE/SF boasts weapons far more powerful than a standard TIE, combining laser cannons with a heavy turret and warhead launcher. Special Forces TIEs have hyperdrives, deflector shields and high-yield cells that provide additional power to onboard systems. These versatile attack ships are used for everything from reconnaissance to combat operations.

So if you ask me, either the general audience simply did not see the rear gunner in the few shots we saw in the film. Or perhaps these fighters can be flown without a rear gunner, but just has that capability for special occasions and needs.

Though we don't get to watch Finn and Poe formulate a plan for escape (for pacing concerns in the film) it's likely that stealing a TIE/SF Space Superiority Fighter is their primary goal and best chance of success. The TIE/SF has a number of new features that make it ideal for their escape: mainly that it's a two-seater and has a hyperdrive, both necessary for Poe and Finn to a) escape together and b) escape the system.

TIE/SF fighters are clearly marked with a red blaze on the hull, and someone more knowledgable about TIE fighters could recognize them by other features.

The Star Destroyer Finalizer definitely has more than one hanger bay and a fleet of fighters larger than the few we see in the scene. Finn patrols the ship and would be able to lead Poe to a hanger bay that houses the kind of ship they are looking for.

As confirmed in Incredible Cross Sections 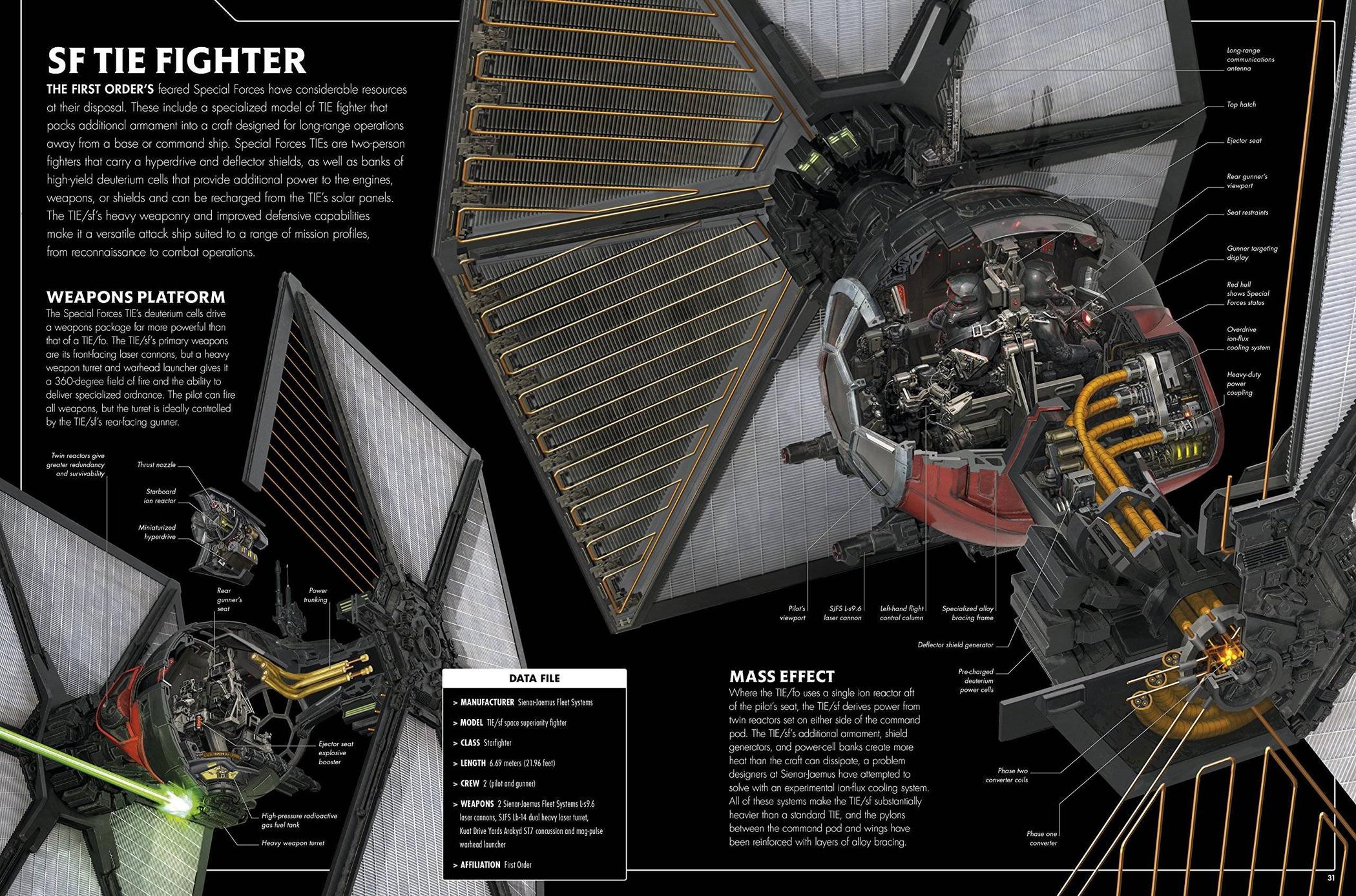 and in the toy 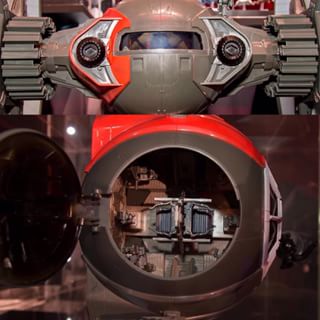 There is a rear window for the gunner (along with their targeting equipment), and the TIE/SF can fire backwards and forwards. This is in keeping with the First Order's military philosophy, which values individual, skilled pilots more than the Empire did, so having specialized roles of gunner and pilot in their more elite fighters makes them more effective.

Firing backwards is crucial for Finn and Poe's escape from the hanger, as that's how they fight off the stormtroopers attacking them, and destroy the hanger bay command center.

They've clearly only roughed in the plan (it's a surprise to Finn that Poe plans to return to Jakku) but it's definitely been decided that Poe will pilot (in the "You need a pilot." exchange) and he doesn't find out Finn isn't trained on weapons until they're in their seats. They're both fly-by-the-seat-of-your-pants kinda guys so this lack of meticulous planning in a stressful scenario is totally in character for both of them.

It's not like Poe is going to kick Finn out of the cockpit and desert his new friend to certain death or "reprogramming," so they make the best of the situation they're in. Good thing Finn is a quick learner.

No word on whether Poe could take control of the weapons from the pilot seat, but he's pretty busy in the moment. Even though Poe is the "best pilot in the resistance," he's in a very tricky situation - flying a ship he's never flown before that's tethered to the wall surrounded by enemy fire. Compared to flying a foreign ship, using the weapons system is definitely the more straight-forward job.

One final observation: because the seats are directly back-to-back, it's unlikely we'd see the gunner in the classic "head-on close up of a random TIE pilot" shot that we usually get during dogfights. He'd be totally blocked by the pilot and the chair, but just because we don't see a gunner onscreen in any other TIE fighter doesn't mean he isn't back there. (Or, for that matter, who's to say that we're not seeing a close-up of the gunner half the time? Their helmets are identical.) 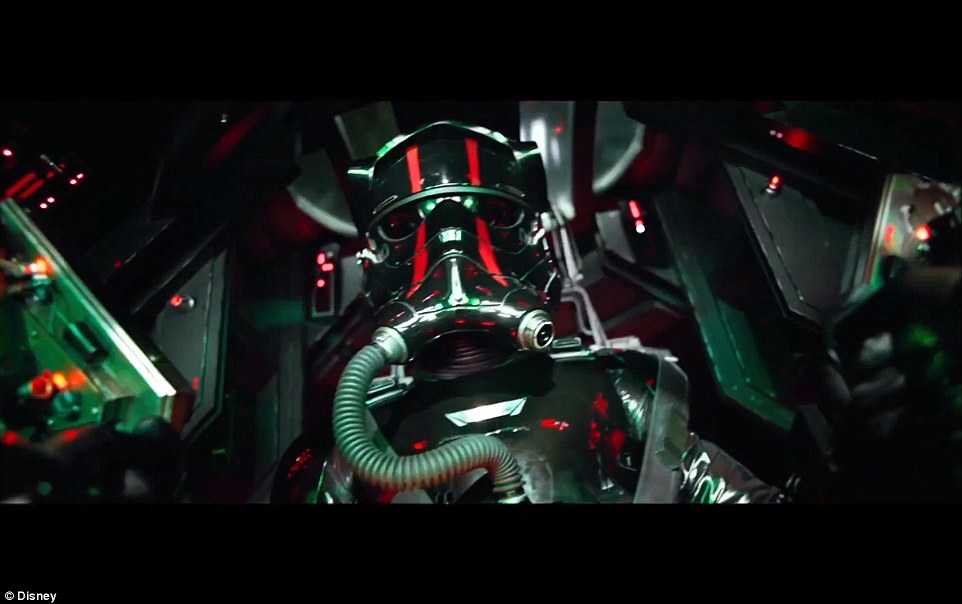 Further discussion about the new TIE/sf and why Finn and Poe don't wear life support helmets like other TIE pilots: Why did the TIE Fighter in Force Awakens have Life Support?

Also of interest: a discussion of Finn as an exceptionally talented stormtrooper. He's new at using the TIE/SF gunning system by he's by no means inept.

19
Why did the TIE fighter in The Force Awakens have life support?
25
Does Finn have any strengths?