In Star Wars: "The Force Awakens," how could this lightsaber have turned up where it did?

In The Force Awakens:

Maz Kanata tells Rey that the lightsaber she just picked up and had visions from belonged to Anakin and Luke and now it's hers.

The lightsaber that Luke got from Obi-Wan Kenobi in A New Hope was lost/destroyed when Luke fought Darth Vader in Star Wars: The Empire Strikes Back.

In Return of the Jedi Darth Vader compliments Luke on building a new lightsaber and tells Luke that his skills are now complete.

How could that possibly be the lightsaber that Anakin used originally, and that was then passed on to Luke, when that lightsaber no longer exists? 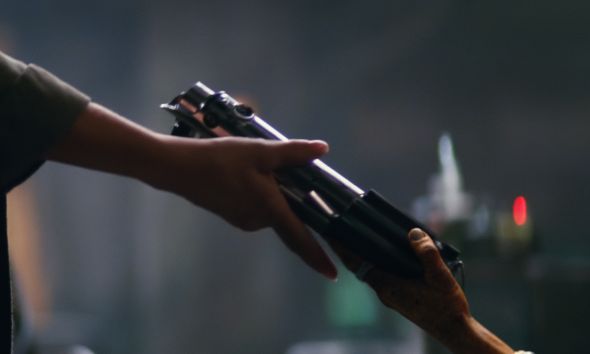 It was lost not destroyed. We saw what happens to Luke but he was a fairly big foreign object picked up by the Cloud City filtering system. However the fate of the lightsaber might be different:

The lightsaber, still clutched by Luke Skywalker’s hand, had become lodged in one of Cloud City’s lower air shafts and eventually was recovered by a maintenance drone.

So it could have ended up anywhere.

We do not know the answer yet:

Maz Kanata says in the film: 'a good question, for another time'

The Force Awakens: Visual Dictionary explictly states that Luke's lightsaber was recovered from within Cloud city. Since the city is floating in mid-air above a gas giant planet, we can reasonably assume that instead of falling into the airducts and then being expelled from the bottom of the city (like Luke), it simply came to rest at the bottom of the main reactor shaft. 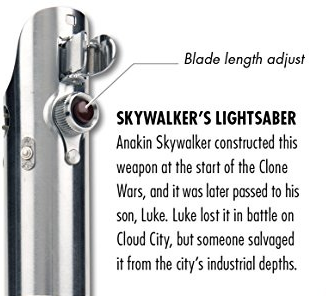 Quite how it ended up in Maz's possession is something that hasn't yet (and possibly won't ever be) explained.

We don't officially know where Maz got the lightsaber yet, but we can guess.

Kylo Ren is using a lightsaber of ancient design, inexpertly crafted, in his service to Snoke.

About thirty years have passed since the lightsaber was lost.

Kylo Ren claims that the lightsaber is his in the movie.

There is a distinct possibility that Luke Skywalker had found his old lightsaber in the ~30 years since RotJ and Ben was trained with it. When Ben then killed off the new Jedi order, he could have discarded it (or it could have been taken from him). This would then put it closer to Maz's reach.

Interesting aside: this theory, if true, means that this lightsaber was used in the killing of two sets of young Jedi.

29
When does Luke's lightsaber first appear in the Star Wars saga?
30
Is the chest in Maz Kanata’s basement the same chest as the one in Obi-Wan Kenobi’s hut?
20
What color is Luke’s lightsaber blade?
27
Is Anakin's lightsaber the only one remaining from the 'Clone Wars' era?
13
Why would Kylo Ren even want the Skywalker lightsaber?
4
How does Maz know this?