Was age a motivating factor in George Lucas changing Anakin in “Return of the Jedi” from being an old man to a young man? [duplicate]

Straight to the point.

Now, I have read all of the reasoning I have been able to consume on why Anakin’s “Force Ghost” was changed from Sebastian Shaw to Hayden Christen at the end of Return of the Jedi but none seems to address an issue I see: Was age a primary motivating factor in redoing the “Force Ghost” from being an older version of Anakin versus a younger version of Anakin.

Darth Vader is old and decrepit and evil… But Anakin Skywalker is young and brave and beautiful… Seems quite patronizing and even makes his redemption at the end of Return of the Jedi seem fake. He found good in him when he was Darth Vader and saw the Emperor killing his son and turned on the Emperor to save the future.

To me, Luke being young and his father being old—and a ghost—makes sense. Luke never fully went “dark” and his father is the one who ultimately ensured he would stay in light. Yes, Anakin was Darth Vader for a good chunk of his adult life… But still… The ending where Luke see’s his father as some kid who is younger than him? It’s just odd.

Was age a role in George Lucas’s desire to do this so Anakin would look young and cool to the merchandise buying youth of today?

This question and answer thread was spurred by this recent question:

And this question and answer thread:

First the first question about recognition is quite fair: Seeing a young man appear out of nowhere after watching an old Darth Vader die is just cognitively hard to understand unless you have watched the prequels.

And the second question was simply about changing Anakin’s head to make his appearance as a “Force Ghost” more consistent with the prequels.

But this question is something different about this whole Sebastian Shaw versus Hayden Christensen switcheroo: Was any of this based on simple audience pandering towards age? Meaning, George Lucas clearly geared the prequels towards kids—far more than the original trilogy—but to me this Anakin “Force Ghost” thing really irks me.

I mean, I understand the bass-ackwards logic that Anakin was only a Jedi for a certain period of his life and then became Sith in the later part of it. But to me it seems the story of redemption is actually lost. Vader/Anakin could not fight age or the decay of his already dysfunctional body. And in an act of love for his son, he killed a great source of evil that destroyed his life, family and threatened to destroy the future. To me, in the end… When Darth Vader was unmasked as an old, dying man that old dying man was redeemed. His spirit as a Jedi was validated by that final act. Thus his “Force Ghost” being old makes sense.

UPDATE: FWIW, Star Wars concept artist Iain McCaig in Art of Star Wars: The Force Awakens presented some ideas that messed around with the concept of what Anakin’s “Force Ghost” was meant to represent in The Force Awakens: 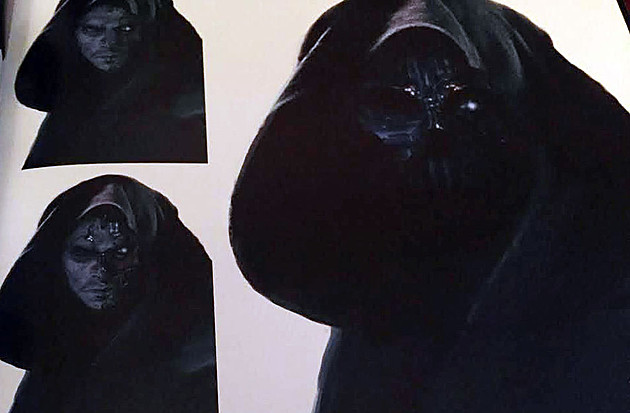 ‘When you light a candle, you also cast a shadow.’ That inspired me to propose, for the first time, that Anakin’s ghost could come back […] If we see Anakin Skywalker, because he does flow back and forth between Darth Vader and Anakin, let’s see him as a character with a dark and light side. The reason Luke is this whole new entity is because he was the first to acknowledge his own dark side — that it was not separate from him.

The ideas were ultimately discarded, but to me it shows that they idea that young Anakin is simply the “good” version because that is before he turned “bad” is actually not as solid an idea as some would imply. They just wanted a teen-heartthrob young guy to tie the concepts of the prequels to the original trilogy.

This ties in quite heavily with a key change that Lucas wanted to make now that his "6 episode" film series was completed, exploring the shift between Anakin as a boy/man and Anakin as Vader.

Dave Filoni, the maker of Star Wars: The Clone Wars stated (in the interview below) that he discussed this issue with George Lucas and that the thinking was that Anakin would have reverted to the last good iteration of his personality, washing away the bad old man.

"It doesn't make sense mythologically for him to maintain the guise of the old man afterward in the Force, because he was never good. He was never balanced when he was that person. When he was the wicked old man. So he had to shed that skin like everything else. He then appears as a young man".

So the answer to your main question is yes, there was a definite desire to portray Anakin as a younger man, specifically to demonstrate the change in his character and the reversion to his (good) younger self from the "wicked" older man he'd been a few scenes ago.

31
What was George Lucas' reasoning for changing Anakin's head?
85
Why hasn't Anakin Skywalker's Force Ghost advised Kylo Ren?
5
Unless they were clairvoyant, how were audiences expected to recognize who was the third Force ghost/spirit at the end of “Return of the Jedi?”