If Darth Vader discovered Luke was his son from the Emperor in the 2004 retconned version of “The Empire Strikes Back”, then how did the Emperor know?

This question is based on an answer I posted on the “Movies and TV” Stack Exchange which asked about how Darth Vader discovered Luke Skywalker was his son and how the logic/rationale over the years seems to have changed to the point of… Arrrgh!

Long story short: Depending on what version of the script/movie existed, Darth Vader either always knew who Luke Skywalker or was clueless/oblivious. But if—as implied in the 2004 DVD re-dubbing/re-working—Darth Vader first learns about his Luke being his son from the Emperor… Then where—or how—did the Emperor discover this information? Or did the Emperor know all along and was just holding onto the info until just the right moment to push Darth Vader’s buttons?

And heck, look at the opening crawl for The Empire Strikes Back; bold emphasis is mine:

It is a dark time for the Rebellion. Although the Death Star has been destroyed, Imperial troops have driven the Rebel forces from their hidden base and pursued them across the galaxy.

Evading the dreaded Imperial Starfleet, a group of freedom fighters led by Luke Skywalker has established a new secret base on the remote ice world of Hoth.

The evil lord Darth Vader, obsessed with finding young Skywalker, has dispatched thousands of remote probes into the far reaches of space....

Is the mention of Skywalker in this opening crawl just a high-level narrative clarification for the viewer or did Darth Vader actually know who Skywalker was and by the time the audience is viewing The Empire Strikes Back we are watching an obsessed Darth Vader on a personal revenge mission?

Wait… Then what does this opening crawl mean the retconned context of Darth Vader’s seeming cluelessness towards Luke Skywalker? He has a personal fleet on the hunt for… Just the Rebels? Then why mention “Skywalker” in the opening crawl like that? Why not say; bold emphasis is mine:

The evil lord Darth Vader, obsessed with finding the Rebels, has dispatched thousands of remote probes into the far reaches of space....

Here are script changes that make my head spin.

The fifth draft of the script implies Skywalker is just some guy they need to hunt down.

For example—as seen on page 90 of Star Wars • Episode Five • The Empire Strikes Back By Leigh Brackett and Larry Kasdan from the Novel by George Lucas (Fifth Draft: February 20, 1979)—was scripted like this: 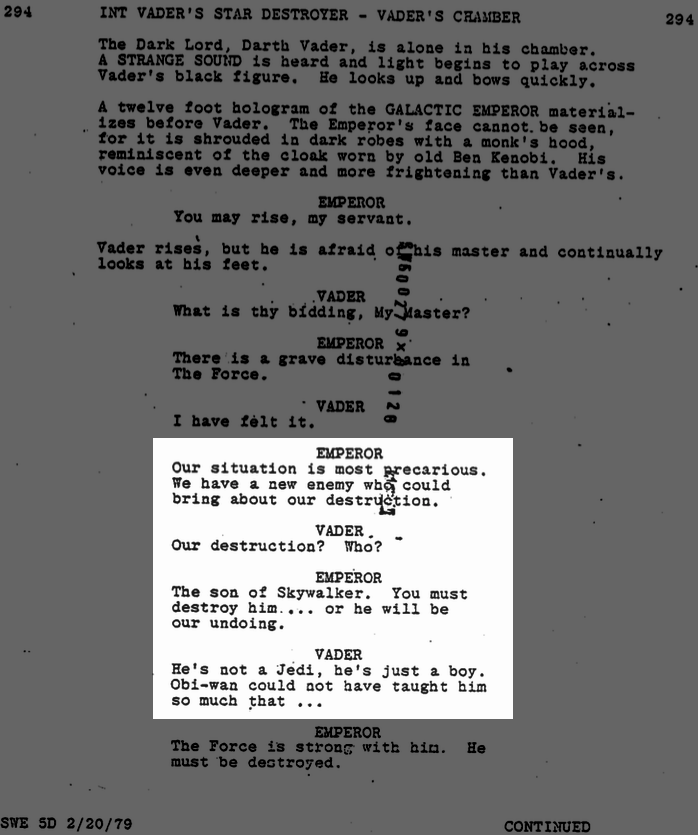 EMPEROR: Our situation is most precarious. We have a new enemy who cold bring about our destruction.

VADER: Our destruction? Who?

EMPEROR: The son of Skywalker. You must destroy him … or he will be our undoing.

VADER: He’s not a Jedi, he’s just a boy. Obi-Wan could not have taught him so much that …

The 1980 release dialogue implies Darth Vader knows who Luke is, but his hiding this information from the Emperor.

But, in the 1980 release of The Empire Strikes Back the dialogue was released to the public as follows. To me it reads as if the Emperor is the one who is in the dark about Luke Skywalker’s lineage and Darth Vader is conning the Emperor to “trust him” to get Luke on their side:

VADER: What is thy bidding, my master?

EMPEROR: There is a great disturbance in the Force.

VADER: I have felt it.

EMPEROR: We have a new enemy - Luke Skywalker.

EMPEROR: He could destroy us.

VADER: He’s just a boy. Obi-Wan can no longer help him.

EMPEROR: The Force is strong with him. The son of Skywalker must not become a Jedi.

VADER: If he could be turned, he would become a powerful ally.

EMPEROR: Yes. Yes. He would be a great asset. Can it be done?

VADER: He will join us or die, my master.

The 2004 re-dubbing makes it seem that Darth Vader is oblivious to his children and the Emperor is the one who breaks the news.

And then the 2004 post-Star Wars Episode III: Revenge of the Sith “Special Edition” DVD redubbed the dialogue to be this:

EMPEROR: We have a new enemy, the young rebel who destroyed the Deathstar. I have no doubt this boy is the offspring of Anakin Skywalker.

VADER: How is that possible?

EMPEROR: Search your feelings, Lord Vader. You will know it to be true. He could destroy us.

VADER: He is just a boy.

Okay, each iteration of this scene implies something different. But the 1980 dialogue seems more sensical. Darth Vader knows who Luke is and is just “playing dumb” to make a power play by using Luke as the “Ace up his sleeve.”

But this 2004 retconned logic makes Darth Vader completely submissive to the Emperor who is “all knowing.” But how did the Emperor know who Luke is and his connection to Anakin Skywalker? Was this just a bit of knowledge the Emperor proverbially “Saved for a rainy day?” Is this something from the prequels I missed or is it something else?

This is the main thrust of the current run of the Star Wars and Darth Vader comics that take place between A New Hope and Empire Strikes Back. It is "Disney canon" (official canon post-Disney purchase).

Even if you don't consider the Disney comics to be canon, it is improbable that the Rebellion was able to keep the names Skywalker and Solo from Imperial intelligence for very long. Especially after the ceremony at the end of A New Hope. Both the Emperor and Vader probably know about his role in the destruction of the first Death Star long before that conversation. With Vader offering Luke help to overthrow the Emperor later in the movie, one would assume that he already has his own plots in motion.

The Emperor is a politician, and politicians live to gossip, a characteristic that Palpatine clearly has as you can see in Episode I: The Phantom Menace. It is easy to speculate that the Emperor got the knowledge via gossip.

Why Vader is so oblivious to the existence of his own son isn't so hard to understand. He passed through a very traumatic near-death experience in which he lost a lot, physically, mentally, and emotionally, leaving few memories of his old self. He doesn't even use his own name and is heavily manipulated by the Emperor. If he remembers that he had a son - he never saw him in person - he may remember him as a baby. But if he knows about Luke and Leia, he can hide that knowledge to protect them.

When the stormtroopers are on Tatooine looking for the droids, they kill Vader's step-brother and sister-in-law. I doubt Vader would have left anything that important to a troop of stormtroopers. He would have most likely discovered Luke's existence then. Though there is no direct evidence of Vader's involvement with the murder of his step brother. They are on the same farm and anything occurring there would be suspect to him.

112
When and how does Vader learn that Luke is his son?

71
Why Did Sidious Tell Vader Who Luke Was?
55
Why did Vader not use the force to stop Luke from falling down in end of The Empire Strikes Back?
32
Why does Palpatine refer to Luke's father as Anakin?
8
Did Vader ever intend to kill Luke?
30
After Hoth, why did Vader pursue the Millennium Falcon instead of Luke's X-Wing?
21
How did Luke know Vader needed his helmet to survive?
14
How did Vader know that Obi-Wan was helping Luke?
46
Who/what exactly does Darth Vader believe taught Luke between the events of “The Empire Strikes Back” and “Return of the Jedi?”
20
Was Luke Skywalker the leader of the Rebel forces on Hoth?