Is there any evidence that Lando Calrissian is Finn's father? [duplicate]

After watching Star Wars: The Force Awakens I heard people claiming that Lando Calrissian is Finn's father. Is there any evidence that he actually is or counter-evidence that he's not?

No, there is no definite evidence either way yet.

For all we know from the movie, Finn never knew his real parents. They may be anyone. Maybe we will never know them.

So far, I have seen two arguments that support "Finn is Lando's son" theory.

First, Lando is about the only human with dark skin in original trilogy. Some people think that relative rarity of humans with different pigmentation makes them all related in some way. Going down this way of thinking, the "obvious" conclusion is that Finn must be Lando's family - most likely son. The same way of thinking tells us that Finn is son of Han and Sana, dark-skinned female human introduced in comic book.

Second, Lawrence Kasdan (co-writer of new movies) said that "Lando I don’t think is finished in any way, shape, or form".

The first argument ignores Mace Windu, another dark-skinned human, who was introduced in prequel trilogy. Mace Windu, being a Jedi, most likely never had a child, but he must have had some parents and might have some sibling, so maybe that family line eventually lead down to Finn. Out of universe, the whole argument is pretty racist.

The second argument probably reads too much into Lawrence's words. He was also contracted to co-write spin-off about young Han Solo, and we know from Empire Strikes Back that Han and Lando had some history together. Lawrence could as well mean that we will see Lando in spin-off movie.

So, I guess it's up to you to decide which side is more convincing to you. If you look for strong, factual, canonical evidence, then the current answer is that we know nothing about Finn's family.

There is some evidence, although not canonical: on Amazon you can buy a jigsaw puzzle of Finn which formerly claimed (you can see it mentioned in the reviews and in this article) that he is Lando Calrissian's son: 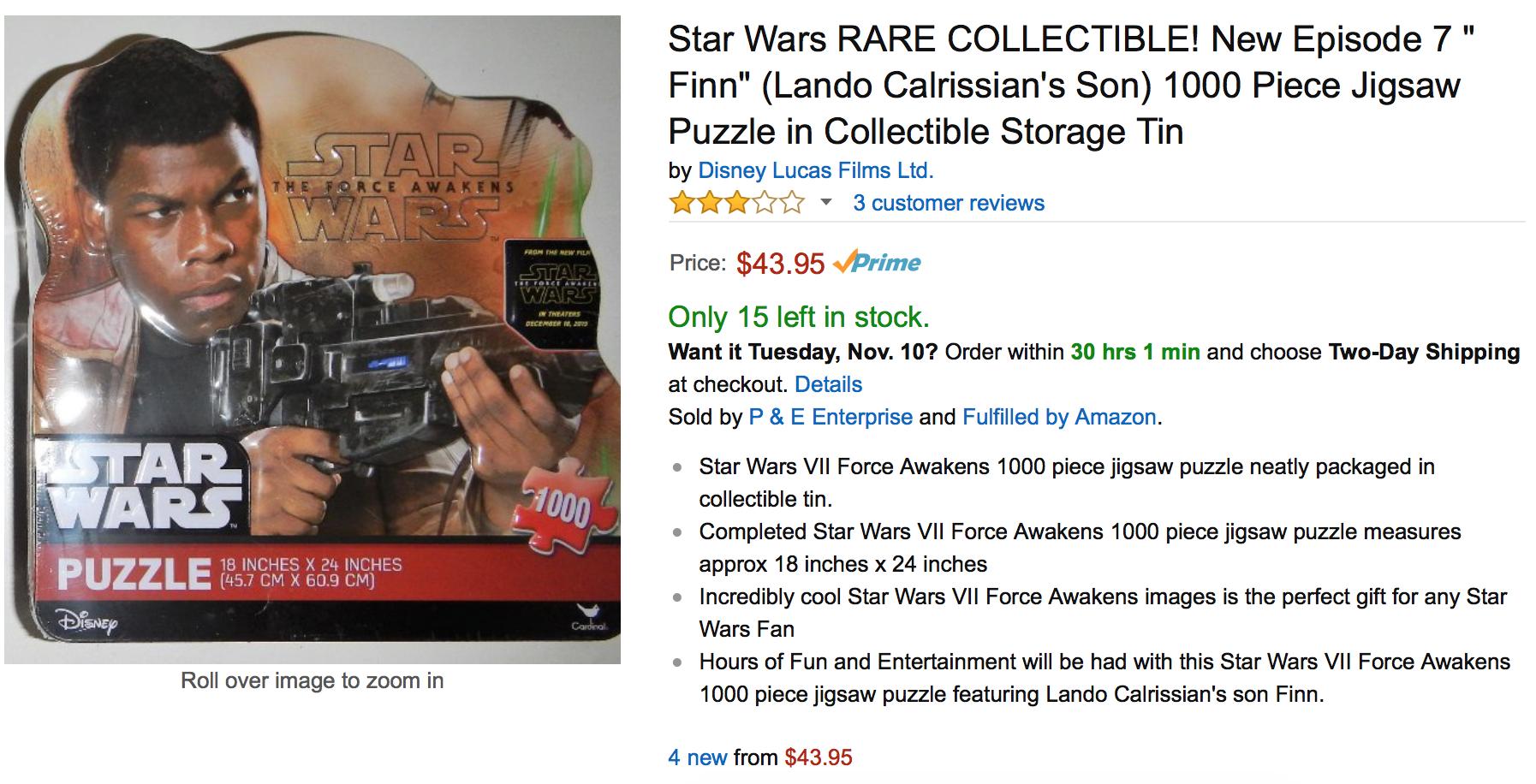 Sadly they seem to have removed this from their product description, since I can't find it anywhere. And there's an article here by Jason Ward of Making Star Wars, who believes this is not real evidence at all and that the puzzle seller simply made a mistake.

A piece of more canonical but also more circumstantial evidence is that Billy Dee Williams, who played Lando in the original trilogy, has said that he may also star in the new trilogy:

“Yeah, people were pretty upset about it. But I uh…I may very well…I have a feeling I’m going to show up. There’s nothing I can really discuss about it at this stage.”

Again, not solid evidence, since he could be showing up simply as an old character rather than as a relative of a new one. But note that he just says he "has a feeling" he'll show up, which suggests there's some compelling reason that he should, which he can't make public. Being an old companion of other recurring stars clearly can't be the motivator he's thinking of, but being related to one of the new stars very well could be!

Just throwing this out there. Like most people, I would love to see Lando return in Episode 8. And like most people, the possibility of Finn being Lando's son has crossed my mind more than once. Though it didn't initially enter my mind purely out of connecting race dots, but because of what Maz Kanata said to Finn in Episode 7. Something along the lines of: "If you live long enough, you see the same eyes in different people. I'm looking at the eyes of a man who wants to run."

Now it's very likely she was simply addressing Finn's unwillingness to fight the baddies, but keeping in mind her "different people with the same eyes" remark, it does sound an awful lot like she's referring to what Finn has in common with Lando. Finn wanted to run, and Lando was willing to bend to the will of the empire, and even betray his friend in the process, rather than fight back.

Not going to say I firmly believe this theory. Just saying it's the only convincing clue I've come across to support it.