When did another “Knight of Ren” played by Mark Stanley appear in “The Force Awakens?” Is anything known about his role in the film?

One of the interesting mysteries in The Force Awakens is the origin and nature of the “Knights of Ren”. We learn quite a lot about Kylo Ren (Adam Driver), but little to nothing about what I presume are his peers in the “Knights of Ren” - although I personally think it’s hinted that:

…they might be the Dark-side corrupted survivors of Luke’s unsuccessful attempt to train a new Jedi order.

Looking at the cast list for The Force Awakens on IMDB, I saw that the actor Mark Stanley (who was in Game Of Thrones as Grenn, Jon Snow’s burly friend on the wall) was cast as an unnamed Knight of Ren.

But I don’t remember seeing him in the film (I’m sure I’d recognise him if not masked or rendered CGI), or in fact seeing anyone who looked like a [non-Kylo] “Knight of Ren.” A search via Google Images just returns pictures of Kylo.

When and where did Mark Stanley appear? What did he do? And what (if anything) do we know about his character? If there’s anything in the novelisation, that’s welcome information as well.

There’s only one possible scene I can think of:

The villainous character in Rey’s flashback? But that character looked exactly like Kylo, with an identical lightsaber. I interpreted that as a premonition of the forest scene.

There was a flashback scene where SEVERAL Knights of Ren appeared (no good screenshot yet, sorry), surrounding Kylo Ren, not just him alone. 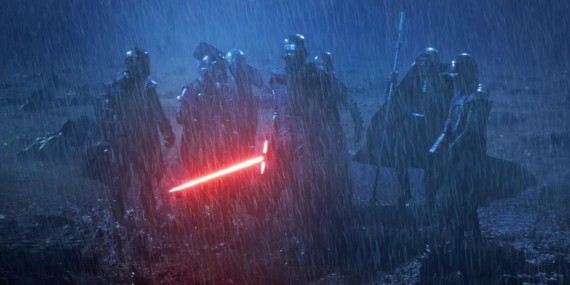 Not the answer you're looking for? Browse other questions tagged star-wars the-force-awakens actors actor-identification knights-of-ren or ask your own question.

101
Why does Kylo Ren wear a mask?
15
Is there any knowledge on who the six other members of the “Knights of Ren” are?