“First I bring you Christmas greetings; afterwards I give you beatings!”

My dad remembers these immortal words being spoken by Bizarro in a Superman comic book from the 1960s, probably between 1962 and 1967. Bizarro Superman was saying it to his Bizarro family, probably while wearing a Santa hat or even a Santa suit.

It may have been a comic published around Christmas, but with Bizarro you never know. As Dad points out, "Bizarro Christmas is probably the fourth of July."

Can anyone point us toward the issue in which this took place?

Sounds like the Tales of the Bizarro World segment printed in Adventure Comics #290 in November 1961. The Christmas bit was only a few panels, but they were all the same brand of delightful absurdity you'd expect from Silver Age Superman. The phrase wasn't actually spoken by Bizarro, but written on a Christmas card: 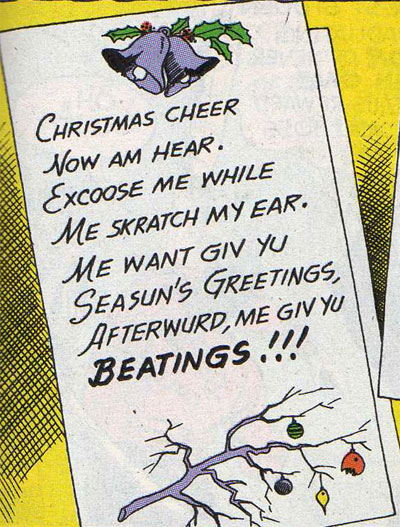 Christmas cheer
Now am hear.
Excoose me while
Me skratch my ear.
Me want giv yu
Seasun's Greetings,
Afterwurd, me giv yu
Beatings!!!

Bizarro-Claus (Bizarro #1 in a Santa costume) also makes an appearance: 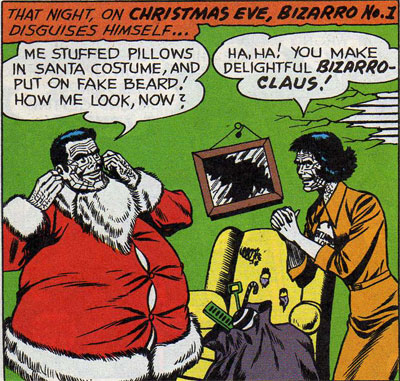 4
When was Superman's first use of heat-vision?
10
Which came first, the “S” or the Superman?
5
Which comic first shows how Superman built his “Fortress of Solitude”?
3
Who Started Fighting Crime First Clark Kent or Bruce Wayne?
9
Who is the first villain to use kryptonite against Superman and how did they know it was his one weakness?
5
First time(s) other superheroes acknowledge Superman as morally superior to themselves?
2
Whose mother's name was known first?
6
Is there an early 90s DC series or tales about a race of aliens that could transform and give others powers accidentally?
8
Who first said this iconic Superman line?