When did 'Star Fleet' become 'Starfleet'?

Around the web and reading various Star Trek materials I often come across two phrases: 'Star Fleet' (emphasis on the space [no pun intended!]) and 'Starfleet'. For example 'Star Trek Technical Manual' uses the former. By the time of TNG I recall that the phrasing often lends itself more to 'Starfleet' but I'm not so sure about whether 'Star Fleet' is used more often in TOS.

So, my question is, from the perspective of the out of universe series chronology, when did 'Star Fleet' become 'Starfleet'?

By 'out of universe series chronology', I mean in the order which the series were produced (i.e. TOS, TAS, TNG etc.)

In the case of "Vanishing Point", it isn't even indicative of anything because both spellings occur.

So I don't think the premise that the spelling changed is accurate.

TL;DR It was always spelt Starfleet

I can think of one thing which could've potentially contributed to the change in spelling between TOS and TNG: the British TV series Star Fleet. Star Fleet (1982) was the English-dubbed version of a Japanese puppet-animated series in the mode of Gerry Anderson's "Supermarionation" series.

X-Bomber was renamed Star Fleet and dubbed by English speaking actors for broadcast in the UK on ITV. The show was broadcast there on Saturday mornings, first airing on October 23, 1982, the day before Star Wars' UK TV Premiere.

The logo used in the English-language "Star Fleet" version of the TV series clearly spaced the title out as two words: 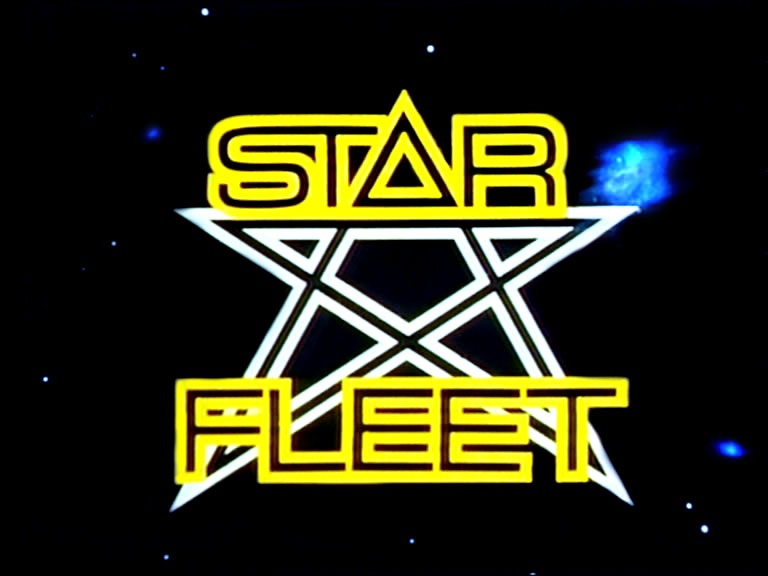 This doesn't seem to be a trademark issue, though. I can't find anything in the UK Intellectual Property Office's online trademark search, which claims to hold UK trademark records from 1876 through the present, indicating that "Star Fleet" was trademarked in association with the show.

However, "Star Fleet" was fairly popular - most notably, the year after its release in the UK, Brian May (of the rock group Queen) gathered a group of musicians to record an EP based around a cover of the show's English theme song.

This is by no means definitive - the lack of any record of a trademark conflict dispels the most likely connection - but the brief success of a TV series using the two-word term may have inclined future Star Trek staff and fans to differentiate their Starfleet with the one-word term.

In Star Wars (1977) Han Solo said it would take half of the [evil Empire's] star fleet to destroy a planet. Han may have been using star fleet as a descriptive term for a fleet of star ships or the empire's fleet may have been officially named The Star Fleet.

I always wondered if that reference was some sort of comment about the Federation and Starfleet not being as good as they claimed.

After Star Wars Paramount and Roddenberry might have decided that the Federation's fleet should always be call Starfleet instead of Star Fleet to make it seem as different as possible from the star fleet in Star Wars.

Is Starfleet ever spelled visually on screen, as in a logo of Starfleet Command or of Starfleet Academy or in some document clearly seen?

22
Has Starfleet ever made First Contact with a pre-established space-faring species oblivious to alien intelligence?
8
Which order should I read the Humble Bundle IDW Star Trek comics in?
8
Star Trek Shield Shape, inconsistencies?
7
What technological concepts did Star Trek invent?
6
Have we ever directly witnessed a phaser safety override in any Star Trek series besides TOS?
22
Which (non-Earth) planet appears in the most Star Trek episodes?
12
What is the first non-Constitution class Starfleet ship we see in canon?
6
How was the TNG Technical Manual created and was it a live document?
7
Why didn't the Discovery crew warn Starfleet about the Defiant?