How does the Doctor “read” the sonic screwdriver?

So, a few of the doctors have now had their own sonic devices (thank god,the 12th finally got his own and not the sunglasses :P) but my question is this, when the doctor is using it, how is he able to determine the results of whatever he is using it for? For example when 10 would scan an alien, he would just hold it to his ear, or 11 would slide it up? How do they "read" the data they collect via the screwdriver?

Given that the screwdriver appears to have certain 'point and think' settings (usually demonstrated when the Doctor gives his screwdriver to someone else), and the Doctor's reliance on other psychic effects (translation circuits, psychic paper, psychic trans-temporal messaging). It seems entirely reasonable that a large part of the feedback is psychic in nature, and the act of 'reading' the screwdriver (or listening to it) is simply a method of focusing on the results being returned from it.

In this manner a sonic device can be made that's usable for all manner of aliens regardless of their sensory input methodology (in much the same way that the Tardis seems to translate everything from every species). That's a big selling point if you're an interstellar screwdriver salesman.

It may have something to do with this part of the screwdriver:

since when ever he takes some sort of reading, he appears to be looking in that general area. That's not the only screwdriver to have that particular area, as it seems like most of the screwdrivers have some sort of see-through tube.

The doctor looking at said area: 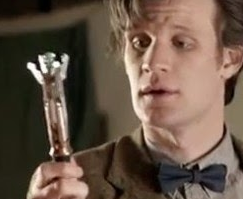 That's just my theory but it seems to make sense. What exactly he sees there is unknown to me though.

Possibly something that we cannot see, since he is an alien.

I'm gonna go ahead and use a cheat answer, combining the other answers and say he receives the information in a number of ways simultaneously.

Considering the technology that The Doctor already uses, we can reasonably assume that the Sonic (I won't specify screwdriver as there is precedent for sunglasses as well) does give psychic feedback. I don't think that there is any reasonable way for it to give enough information using only visual or auditory messages, considering how much data The Doctor gets from it in the short amount of time in which he receives it.

However, that's not to say that it only communicates telepathically. It might also emit noise or visual signals combined with psychic information. Just like a video can give more information being played with sound, or a circle in 2 dimensions becoming a sphere in 3, data might be able to be transmitted more effectively via a variety of outputs.

This would make sense, as using only noise/ visual output seems is not really an option, yet all of the versions of The Doctor seem to read the information through non-psychic means.

Post-screwdriver, he also appears to wear the sunglasses much more often than he uses it for its Sonic purposes, suggesting that he is receiving some visual stimulus from it. In addition, Osgood appears to see something when she wears the glasses, indicating that the Sonic is physically conveying at least part of the information visually.

However, I would suggest the possibility that perhaps it is entirely psychic, and The Doctor listening to/ looking at the Sonic is just a quirk that he has developed in order to allow others to realize that he is receiving information from it, so that they do not interrupt his thought process whilst getting the data transmitted to his brain.

This would, of course, mean that he just wears the glasses to look cool. But if this was true, then why would he ever have gone back to the screwdriver?