Did I correctly spot a cameo in The Force Awakens?

I saw TFA twice over the weekend and the second time through, I spotted an older guy that looked and sounded an awful lot like

Temuera Morrison with a bunch of movie make-up to make him look really old.

He appeared for a second during the assault on Starkiller Base as a Resistance officer in the room with Leia. I can't remember his exact quote but he makes some quick observational statement about the battle to Leia. Was this

I didn't see him in the credits and I can't find anything online about it so I'm thinking I might be crazy... Plus the scene went by too fast to truly get a solid look.

Do you mean this guy? 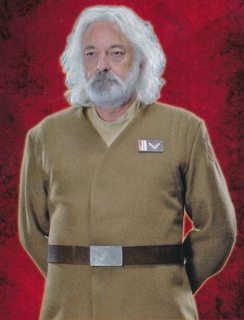 Major Ematt had one line and was played by Andrew Jack

Not the answer you're looking for? Browse other questions tagged star-wars the-force-awakens cameo or ask your own question.