Why did Darth Vader choose to take shots from Han Solo?

In Episode V, in Cloud City, Lando Calrissian brings Han Solo, Princess Leia, and Chewbacca into an trap, where Darth Vader is sitting in a room. Han immediately takes his gun out and shoots at Vader. 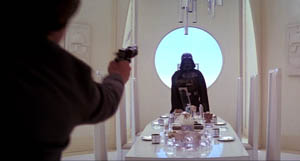 Vader blocks the laser blast with his robotic hand. He then uses the force to pull Han's blaster from him.

Why would he choose to confront the rebels in person and not be ready to be fired at?

He could have done the following:

All of which would have prevented him taking shots.

Isn't the point of being trained to use a light saber so you don't take damage from laser blasters? Are we to assume that Vader's suit and hand build is strong enough to take the same blast from a weapon that is used to disable other electronics to open/close doors?

It is instantly demoralizing. If a bunch of storm troopers busted in, chances are Han or Chewie would whip out the blasters and start firing. This way the targets are caught unawares, show blatantly that they are meeting overwhelming force, and within seconds neutralized. No heroic last stands, no fiery martyrdom, but 3 captives with minimal fuss.

The dinner-with-Lando scenario makes a lot of sense if you consider the Bespin situation from Vader's perspective. Consider what Vader knows about Han and Chewie. (I'm drawing from the movies only, not all the cartoons and books). Solo is shacked up with the Princess, and has risked his life alongside Luke and the Rebels, but maybe he or his Wookiee can still be bought with promises of money and freedom. One of them might tell me where Luke is! (Then I'll laugh and give Solo to the bounty hunter)

For this to work, I need all of them to at least consider the possibility that I might not kill them all, so I prefer them alive and unruffled (at first). Also, Solo is the promised price to be paid to Boba Fett for his services, so it's best that Solo live. Excessive violence in the facility will also anger Calrisian, who will then become a pest. Keep Calrisian pacified, and he will encourage Solo and the Wookiee to ignore Leia, be smart, and tell me what I want to know. So. Finesse.

I've got it. A nice dinner with their friend Lando. The plan is perfect: 1) They might leave their weapons in their rooms (Chewie came to dinner unarmed). 2) If they take their guns to dinner, I needn't disarm them unless they draw on me, and such force need not be lethal. I'll take care of it personally. 3) Even if I have to disarm them, I will continue to be courteous until I have had a chance to evaluate them. If no sell-outs step forward, fine. That means they're either loyal to Luke, or they simply don't know where he is. Either way, we'll roast them on a spit, and if Luke cares for them, he will come to me. (Then I'll laugh and give Solo to the bounty hunter)

On Jabba's sand skiff, Luke's mechanical hand fully absorbs a blaster shot from one of Jabba's men, and the hand continued to work fine. Vader, meanwhile, did not absorb Han's blaster shots, but rather deflected them with his hand. Is that the force, or an industrial strength mechanical hand? Doesn't matter. Point is, Vader had it handled, and he handled it with finesse.

VADER: "We would be honored if you would join us."

He looks civilized and lawful. These are the deeds that keep businessmen complacent and cooperative toward a tyrannical imperial government, and legitimizes the punishment dealt to those who resist.The movies often focus on Vader's constant reliance on force and intimidation, but the Empire's servants do get paid as well.

Of course we know what happened. Neither Solo nor Chewie would sell out Luke, or the rebellion, and they didn't know where Luke was anyways. Whether they actually sat or ate anything in front of Vader is up for speculation, but they were all in jail when next we see them.

I always assumed that he absorbed the blasts using the Force. There is precedent for it (in the EU, at least) - Corran Horn did it, though a predisposition for that ability does run in his family.

The film's novelisation gives us some fairly strong indications of what's going on. First off, it's worth noting that these are high value prisoners. Vader has gone to great trouble to clear the city, hide his troops and arrange this ambush. He's evidently unwilling to let his troopers spring the trap because of the possibility that one of them might get hurt. This is, of course, the same reason why he stops Fett from firing in the Carbonite chamber later.

Second of all, the ease with which Vader captures Solo and the others is a good indication that he doesn't see them as any sort of threat. Words like "effortlessly" and "harmless" are bandied around to show just how utterly insignificant Solo's attempts were.

But the man who may have been the fastest draw in the galaxy was not fast enough to surprise Vader. Before those bolts zipped halfway across the table, the Dark Lord had lifted a gauntlet-protected hand and effortlessly deflected them so they exploded against the wall in a harmless spray of flying white shards.

Astounded by what he had just seen, Han tried firing again. But before he could discharge another laser blast, something—something unseen yet incredibly strong—yanked the weapon from his hand and sent it flying into Vader’s grip. The raven figure calmly placed the weapon on top of the dining table.

He might well have not expected Solo to begin firing as quickly as he did, people (Vader too) have a habbit of underestimating Solo. Watch the scene, Han has is blaster out within a second or two of seeing vader. I would guess he intended to walk out and say something dramatic but Solo shot him instead.

However it did not matter because he could bat the shots away the same way we might bat away a child with a stick.

There could be many reasons for this. He could have done it to simply show off how powerful he was to Solo and the other stormtroopers.

Maybe he just didn't feel like pulling out his lightsaber, thus showing that even barehanded he is more than a match for any blaster.

Vader didn't get damaged because of his hand being bionic, that would make no difference as other Jedi that have no bionics have also been able to do the same thing, Luke, Yoda, Dooku, Jacen Solo and others being just a few examples of this.

Though only the strongest Jedi were able to do this, it's certainly not unheard of to be able to do so.

Thus, Vader was in no danger at all from Han pulling out his blaster and shooting him. Vader is at such a level that he doesn't even need his lightsaber against the vast majority of threats that could come against him. With his force powers, physical strength, size, martial arts skills and other combat abilities, and with basically all the Jedi being extinct, he only has to pull out his saber against Obi-wan, then Luke in all three of the original movies, as well as the Noghri warriors of Honogr.

The group is no threat at all to Vader. Instead he wants to take of business himself (which is why he's at Cloud City, after all). He harmlessly deflects the shots, such is his skill with The Force, and easily disarms them as he would a child.

This is explained in the original script, too:

Plus it made for a cool reveal in the movie ;)

Yoda is able to stop force lighting from Count Duku and Palpitine. So the force can stop bolts of energy. Darth needed them alive so he decided to see to it personally.

Plus it's bad ass.

Not the answer you're looking for? Browse other questions tagged star-wars darth-vader the-empire-strikes-back han-solo or ask your own question.

237
Are all stormtroopers as poor soldiers as the ones in the movies?
87
Why does Darth Vader stop Boba Fett from shooting Chewie in The Empire Strikes Back?
57
Why don't the Jedi use tutaminis instead of using their lightsabers?
20
Why did the clones' blaster color change?
16
When did Han find out who Darth Vader was?
20
Can lightsabers ever bend?
21
Did Vader deflect, absorb or block Solo's blaster?
8
Can a Jedi *reflect* blaster bolts with their hands?

50
Why did Darth Vader torture Han Solo in Cloud City?
53
Why specifically did Darth Vader choose Han Solo to test the carbonite freezing?
21
Did Vader deflect, absorb or block Solo's blaster?
10
Why couldn't Yoda save (or help Luke save) Han and Leia in ESB?
38
Did Han Solo know that Anakin Skywalker was Darth Vader?
27
Why didn't Vader Force Pull the Death Star plans into his hand on the Rebel flagship?
8
Was Lando referring to this event on Cloud City?