Just got back from watching the latest Star Wars and it occurred to me at the start and about 3/4 of the way through that a blaster rifle is essentially a super hot bullet somewhat similar to a lightsaber.

So with that in mind, when a character is shot with a blaster rifle by someone or they are wounded by a lightsaber, there shouldn't be any blood - right? Or am I wrong and this isn’t right at all.

Because in the first The Phantom Menace, when Maul is sliced in half by Kenobi, there is a tiny cloud of blood. And in the latest movie when…

…Kylo Ren is shot by Chewbacca he proceeds to hit the side of his body where he was shot in the forest during the fight scene with the two and blood falls from his wound onto the snow.

My thought is that because both are so hot, when it comes into contact with the skin, yes it will hurt but it would cauterize at the same time because of the heat. How wrong am I?

This question was spurred by another question about lightsabers causing cauterization but if questioning a blaster rifle as well as a lightsaber.

While a blaster shot or a lightsaber strike can potentially cauterize the wound it makes, remember that after…

…that character was then engaged in a fairly physically intense lightsaber battle. All of the bending, stretching and moving around might have just slowly opened up that scabbed up wound.

Imagine having stitches around an area of your body that bends a lot. Your care and cleaning advice for the wound would be to be careful about not doing too much strenuous activity which might cause the stitches to pop and open up. Getting into a massive fight right after a part of your body is damaged will pretty much cause “cracks” and breaking to form in whatever stuff—either scabs or stitches—encompasses the “sealed” area of that wound.

We've seen that lightsabers don't completely cauterise the wounds they make in SW:ANH after Kenobi takes someone's arm off (although, there is less blood than you would probably normally get): 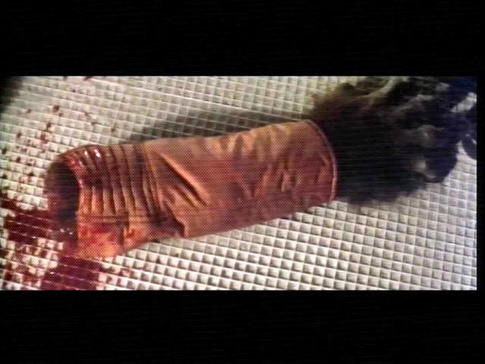 As JakeGould mentions - even with cauterisation, movement and strain on the cauterised layer would end up causing tearing and subsequent bleeding. The character in question probably didn't get any significant medical assistance before we see him next.

POTENTIAL SPOILERS FOR THE FORCE AWAKENS AHEAD

. As for Kylo Bleeding as a result of the blaster shot, remember he's not the only one bleeds from blasts in this film, notice the storm trooper at the beginning who's blood got on Finn's Helmet. Also did Chewie Bleed? From what i remember, i can't see one instance in the original and prequel trilogies where humanoids bleed as a result of a blaster shot.

So here's my theory. Its been 30 years since return of the jedi, simply put, blaster technology has advanced (or rather just changed) in that 30 years, so now the shots cause bleeding which will increase the blasters effectiveness, as before someone could get shot and live, but now there is an increased chance of fatality as someone could bleed out now depending on the extent of the damage caused by the new blasters. The new blasters have another drawback though: The different type of bolts produced can now be stopped mid-air by force users as shown by Kylo Ren at the start of the film, a feat which has never been seen before. A feat which would make some conclude that Kylo should be more powerful than Darth Vader, which he fears he won't be and has shown in other areas that he isn't. But had Darth Vader been around for these newer blasters, he too would have been able to stop them mid-air. Just a thought.

As Isaac said, but about the bleeding, no, it's not that. Blasters have always caused blood, just some blasters literally cauterize the wound as said with lightsabers. Both are really effective, whether the enemy dies or not depends on their armor and the strength of the blaster, but either way, most blasters not on stun will leave someone mortally wounded, blood or no blood, it just depends on the type of blasters.

The most powerful probably being assasin rifles, which literally can kill instantly from just one shot to the chest without armor.

16
Does a lightsaber have a cauterizing effect when cutting off appendages, or not?
11
Were lightsabers made to cauterize wounds because children were watching?

44
Why would a slug thrower be more effective against a lightsaber/Jedi than a blaster?
13
Would a lightsaber melt or vaporize a bullet?
16
Does a lightsaber have a cauterizing effect when cutting off appendages, or not?
19
Outside of Order 66, does a blaster ever beat a lightsaber?
20
How Does Kylo Ren not stop Chewbacca's blaster?
10
Why did Chewbacca's bolt not kill or knock down Kylo Ren?
48
Why didn't Luke use his lightsaber during his mission on the first Death Star?
12
Did Leia know that Luke wasn't really there?
7
Why did Ahsoka's lightsaber grip change?