How aware were the makers of The Force Awakens of Legends/EU Canon?

When Disney took over Lucasfilm, and announced the creation of new movies, current Extended Universe works were deemed to be non-canon.

Interestingly though, there seem to be a number of plot points within The Force Awakens that seem very similar to events that took place in the EU (renamed "Legends" by Disney).

There are quite possibly other examples.

Additionally there is evidence that George Lucas was fully aware of at least one of these plot points.

George Lucas actually got directly involved the Jacen Solo storyline: 'it had been the creative team's intent to kill Jacen Solo in Anakin's place and have Anakin become the major hero. This was abandoned when Star Wars creator George Lucas vetoed the idea of Anakin Solo becoming the dominant figure, and the brothers' dramatic roles were swapped. Jacen Solo became the central figure of the arc; according to editor Sue Rostoni, "in many ways, the NJO is really his series."' - http://starwars.wikia.com/wiki/Darth_Caedus

Is there any evidence that the writers were paying homage to the EU here? They certainly were happy to pay homage a LOT to A New Hope! Or is this all just coincedental. The EU is so massive that pretty much anything that could reasonably happen has happened. However, some of the plot points are pretty well known, so can we reasonably assume that somebody being paid a lot of money to work in the Star Wars universe may have been aware of these things. 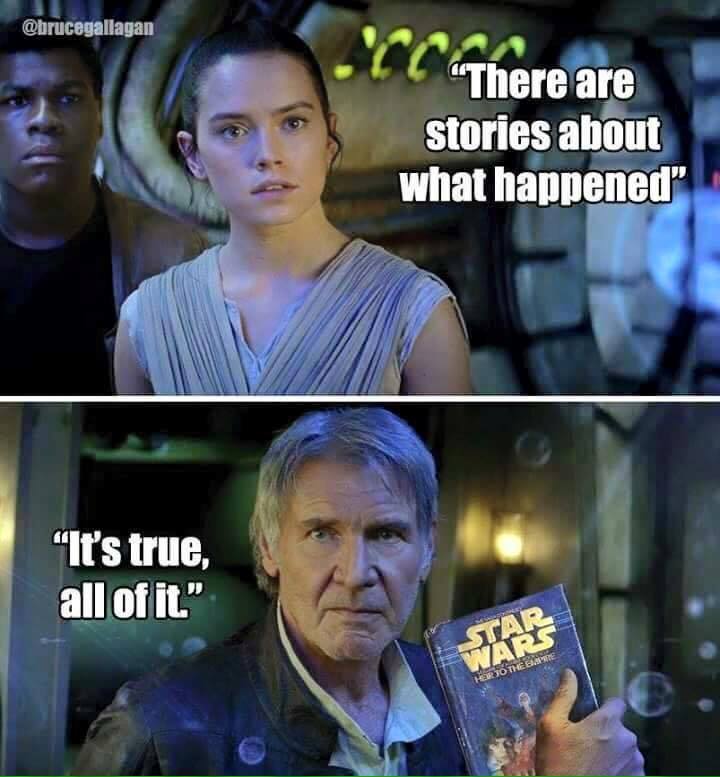 Not the answer you're looking for? Browse other questions tagged star-wars star-wars-legends the-force-awakens canon or ask your own question.

10
Did anyone at LucasFilm acknowledge specific cases of borrowing from EU/Legends?
0
Does "Star Wars: The Force Awakens" Invalidate Some of EU / Legends?

33
Why were some lightsaber effects in A New Hope different quality?
1
How did the Tauntaun's guts keep Luke warm on Hoth?
3
Did any of the EU material come from George Lucas?
6
Is there evidence that Lucas intentionally introduced similarities between Episodes I and IV?
35
Did Obi-Wan ever pay Han Solo? If so, where did he get the money?
35
Why did Obi Wan tell Luke his father wanted him to have his lightsaber?
2
Could Luke's lightsaber call to Finn instead of Rey?