Is the chest in Maz Kanata’s basement the same chest as the one in Obi-Wan Kenobi’s hut?

In The Force Awakens we see Rey seemingly beckoned by magical voices that only she can hear emanating from something Maz Kanata’s castle basement on Takodana. Rey runs around looking for the source of the voices she’s mysteriously hearing, opens up a wooden storage chest and find’s Luke/Anakin Skywalker’s lightsaber which was lost in Luke’s duel with Darth Vader at Cloud City in The Empire Strikes Back.

Okay, with that established is it at all possible that the wooden storage chest Rey discovers and opens to find the lightsaber in Maz Kanata’s basement is actually Ben (Obi Wan) Kenobi’s wooden storage chest from his pied-à-terre/bachelor pad hut on Tatooine? I mean Ben just ditched that place without giving anyone any notice. It’s conceivable his belongings ended up on space-eBay, right?

Screenshots of what I just described below:

Given how small-scale the relationships in the Star Wars universe are—everyone seems to know each other or are related to each other—and all of the other happy coincidences we see in this film, it makes you think!

As you can see in this image, the chest in Obi-Wan's hut is pretty big, and comes to above the knee. While officially Obi-Wan Kenobi is six feet tall (1.82 meters), the actor who played him, Alec Guinness, was only 5'10" (Ewan McGregor is also 5'10", interestingly). Referencing that, and R2-D2's height of 3 foot 7 inches, the chest in Obi-Wan's hut appears to be almost three feet tall: 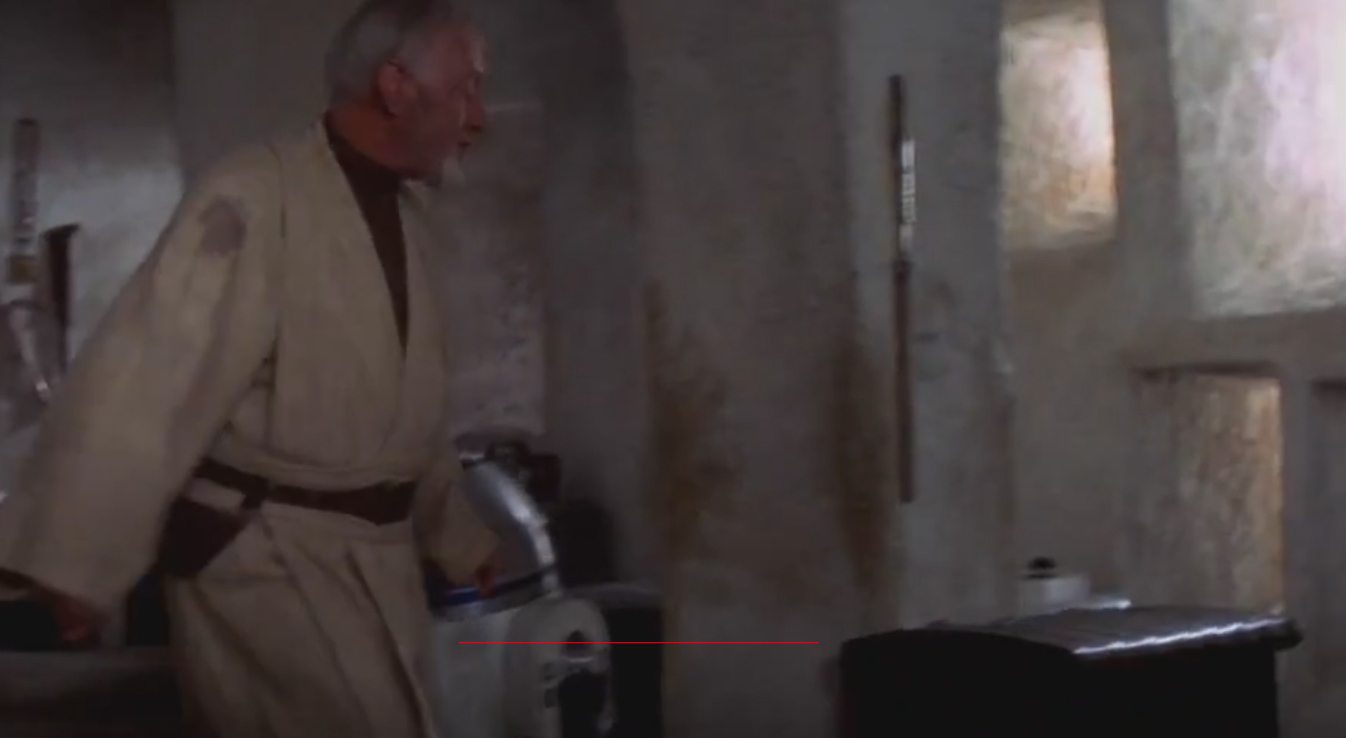 It's also slightly curved, and has a lid that is several inches tall:

Whereas the chest that Rey discovered is small enough to sit on a stone table, and has no stitching on the sides of the lid, which appears to be only about an inch thick: 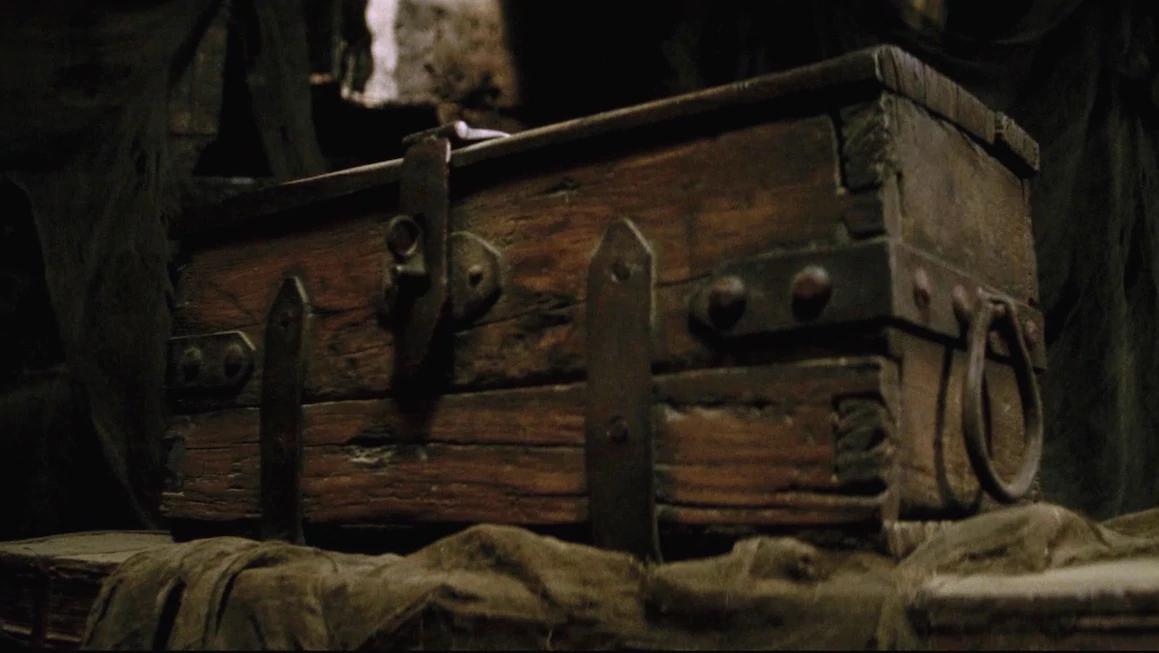 It seems to be just big enough to hold the lightsaber with some extra space on either side. Knowing that Maz Kanata is only four feet (1.24 meters) tall, the chest would have to be nearly 3/4ths as tall as her in order to be near the same dimensions as Obi-Wan's chest. As we can see, however, it's not even as tall as her torso, which looks to be approximately 1/4th of her total height. 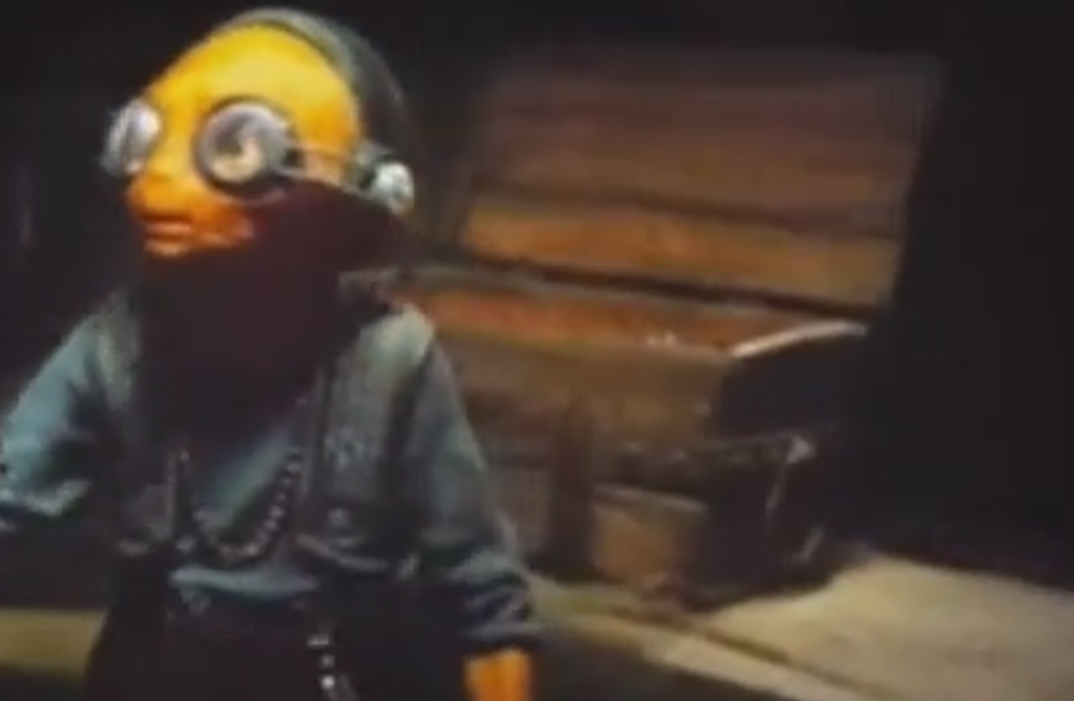 As much as I'd like this to be Obi Wan's chest as well, if you read the Marvel Star Wars comics, which are now canon, Boba Fett actually rendezvous with Luke to Obi Wan's place and pretty much blows up everything in it, leaving very little left.

The most obvious sign is the hasp on the front of Maz' trunk. Obi-Wan does not have to do anything to open the chest except to lift the lid. I was hoping that it would be the same chest, but it is clearly not.

19
What is the origin of the name "Obi-Wan Kenobi"?
3
Why did Obi-Wan and Qui-Gon Jinn attack Darth Maul unfairly instead of one-on-one?
16
Why didn't Obi-Wan use The Force?
14
Are Qui-Gon And Obi-Wan from the same planet?
2
Is there any hard evidence that Supreme Leader Snoke could be the same species as Maz Kanata?
21
Was Obi-Wan Kenobi assuming the same pose of the Jedha statue before he died?
2
Why did Grievous tell Obi-Wan he was trained in the Jedi arts when Obi-Wan already knew?
4
How does Obi-Wan owe one to Anakin if he doesn't get saved?