In the original Star Wars trilogy, we see a primarily light grey X-Wing used by characters such as Luke Skywalker.1

In The Force Awakens we see a new model X-Wing used by characters such as Poe Dameron, whose personal Fighter is primarily black.2 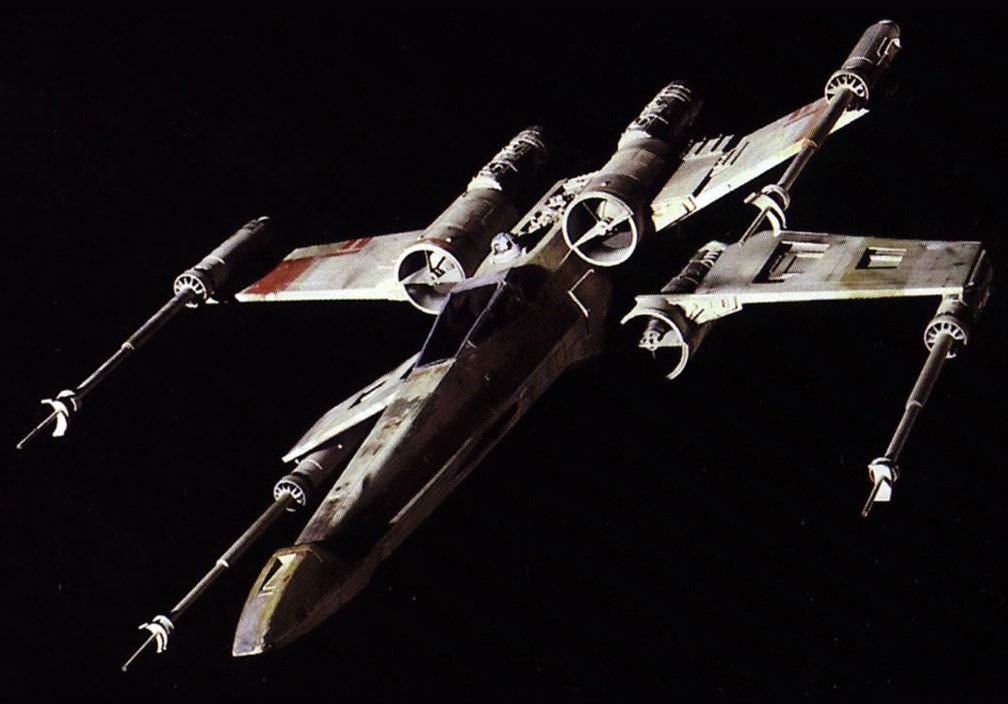 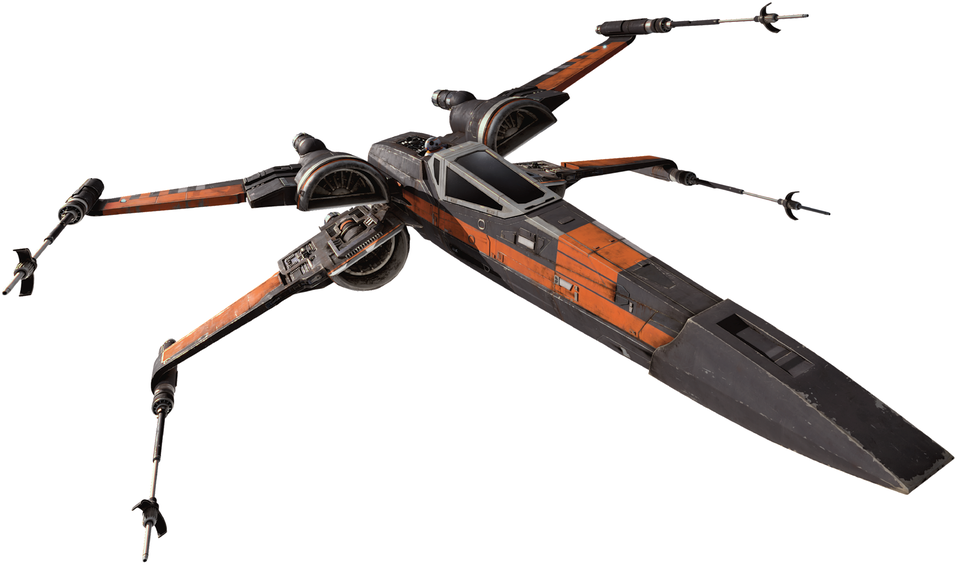 These models vary by much more than color, such as the parts that appear to be intake vents are cylindrical in (1), but half-cylinders in (2) that form a complete cylinder when the wings are in closed configuration.

What's the in-universe significance of these changes? Are the models like Poe's Black-Wing faster, more maneuverable, stealthier, etc.? Basically, is the design purely aesthetic or does it have different functionality/capabilities?

The X-wings in The Force Awakens are new models donated to the Resistance.

The craft were donated by sympathetic members of the New Republic, and the Resistance operated a fleet of the X-wings out of their base on D'Qar. Blue Squadron had their X-wings stationed in a hangar at the base.

And further confirmed on the official Star Wars website with more details on the T-70’s improved strike capability as well as reiterating the fact the Resistance had finance issues:

Faster than the Alliance-era T-65s, Resistance X-wings are maneuverable enough to engage TIE fighters in dogfights, but powerful enough to take down capital ships. The credit-strapped Resistance relies on X-wings donated or lent by sympathetic New Republic senators and local security forces.

So if you are a military Resistance force—who might have finance and resource supply issues—and are offered a small fleet of new-model fighters for free all you can really say is: “Thank you!”

And comparing the stats between the T-65B model and the T-70 model show a few subtle difference in armament capabilities:

And out-of-universe, Joe Johnston—the special effects guy who actually designed and built many of the Star Wars spacecraft—is quoted as saying the following in an interview with Yahoo! Movies; bold emphasis is mine:

Q: Have you had any involvement in the new Star Wars? Has J.J. Abrams asked you to consult on any designs?

A: None whatsoever, but I did notice that he’s gone back to the original twin-nacelle X-wing design, much sleeker and aeronautic than the four-engine. Smart.

But the similarities between the new X-wings and those 1970s Johnston/McQuarrie ideas are seemingly coincidental as explained by The Force Awakens production designer Darren Gilford in this WIRED magazine article:

“When we were updating the X-wing we put two engines on either side and split them in the middle,” says Gilford. “Then something in the back of my mind said, ‘I’ve seen that before.’ Sure enough, I went back to one of Ralph’s classic paintings, and he had done a version like that. I pulled that image out in the next meeting with J.J., and he said, ‘That’s it. If Ralph had that idea, it’s good enough for us.” 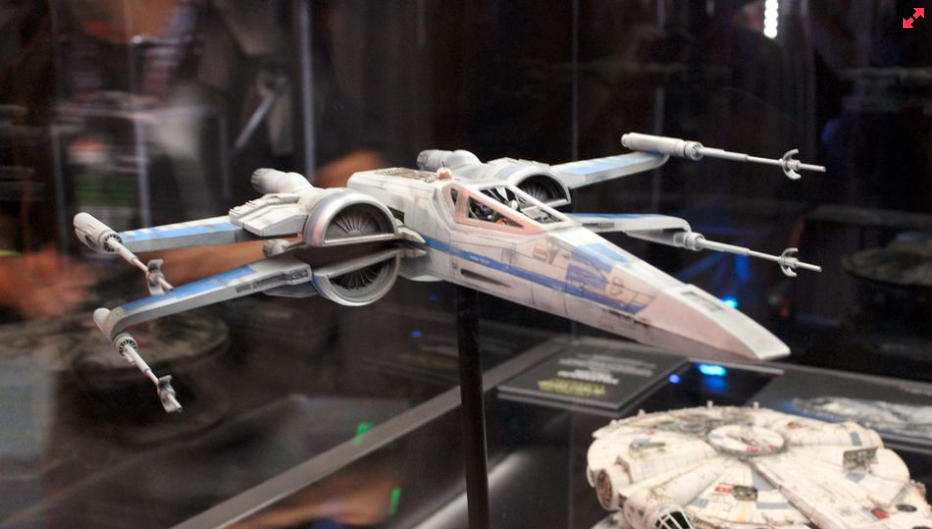 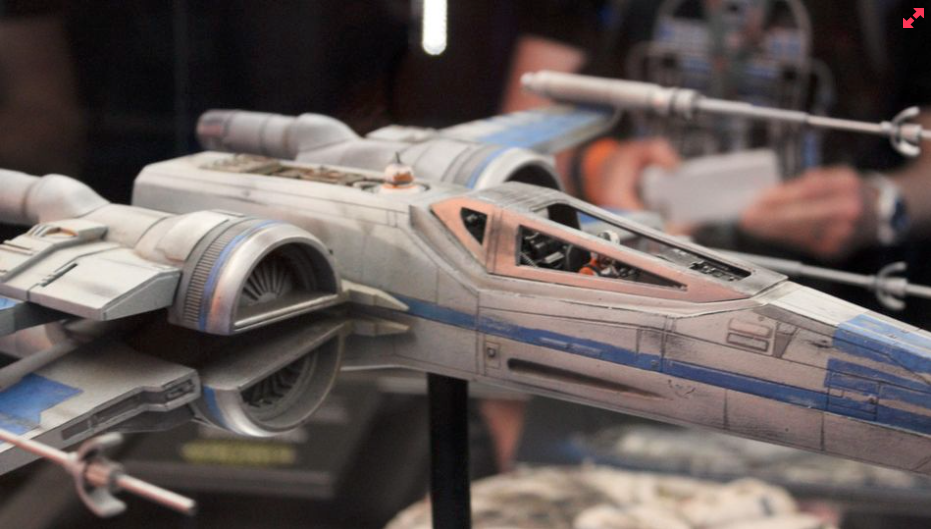 I see no deep in-universe meaning for Poe’s X-wing to be all black past him wanting it to “look cool.” This “it looks/sounds cool” idea is confirmed via the entry for Black One on Wookieepedia; bold emphasis is mine:

Black One was a T-70 X-wing fighter that was used by Resistance pilot Poe Dameron. Dameron’s call sign of Black Leader was derived from this X-wing; he was not the leader of a Black Squadron.

But out of universe it makes sense: One thing we see consistently in The Force Awakens that we didn’t see in any of the original trilogy films were dogfights within a planet’s atmosphere.

Outside of the “Battle on Hoth” in The Empire Strikes Back—which was mostly a ground battle between Snowspeeders (T-47 airspeeder) and Imperial Walkers—the X-wings, TIE fighters and other light colored space craft in the original Star Wars trilogy engaged in battle primarily in the dark depths of space. This was a natural limitation caused by the film-based/analog film making and optical special effects techniques used by film makers the 1970s and 1980s; it was just easier to photograph, process and manage primarily white space ships on a primarily black starfield background.

Since compositing and imaging techniques nowadays are more flexible thanks to the use of computers and CGI, pretty much all of the flying combat action we see in The Force Awakens happens within a planet’s atmosphere. Knowing that, Poe’s X-wing simply exists because it couldn’t before: Nowadays you can have a black X-wing in a space background since the digital imaging technology exists to make it happen.

Also a white X-wing in the relatively white background of a planet’s atmosphere is just too hard to visually parse for a whole sequence. Not to mention Poe is a “hero” and his black X-wing is easier to spot/differentiate simply because it’s black.

Some production artwork exploring the idea of space craft being used within a planet’s atmosphere.

The focus on scenes with X-wings within a planet’s atmosphere—again, something new to the film series—can be seen in these illustrations created Lucasfilm and Disney illustrator Robert Bailey. Note that while the first image and third image is of the new T-70 model, the second image clearly shows the T-65B model. I don’t recall seeing the T-65B model shown in action in The Force Awakens so this could just be a production drawing comparing and contrasting the two different designs. 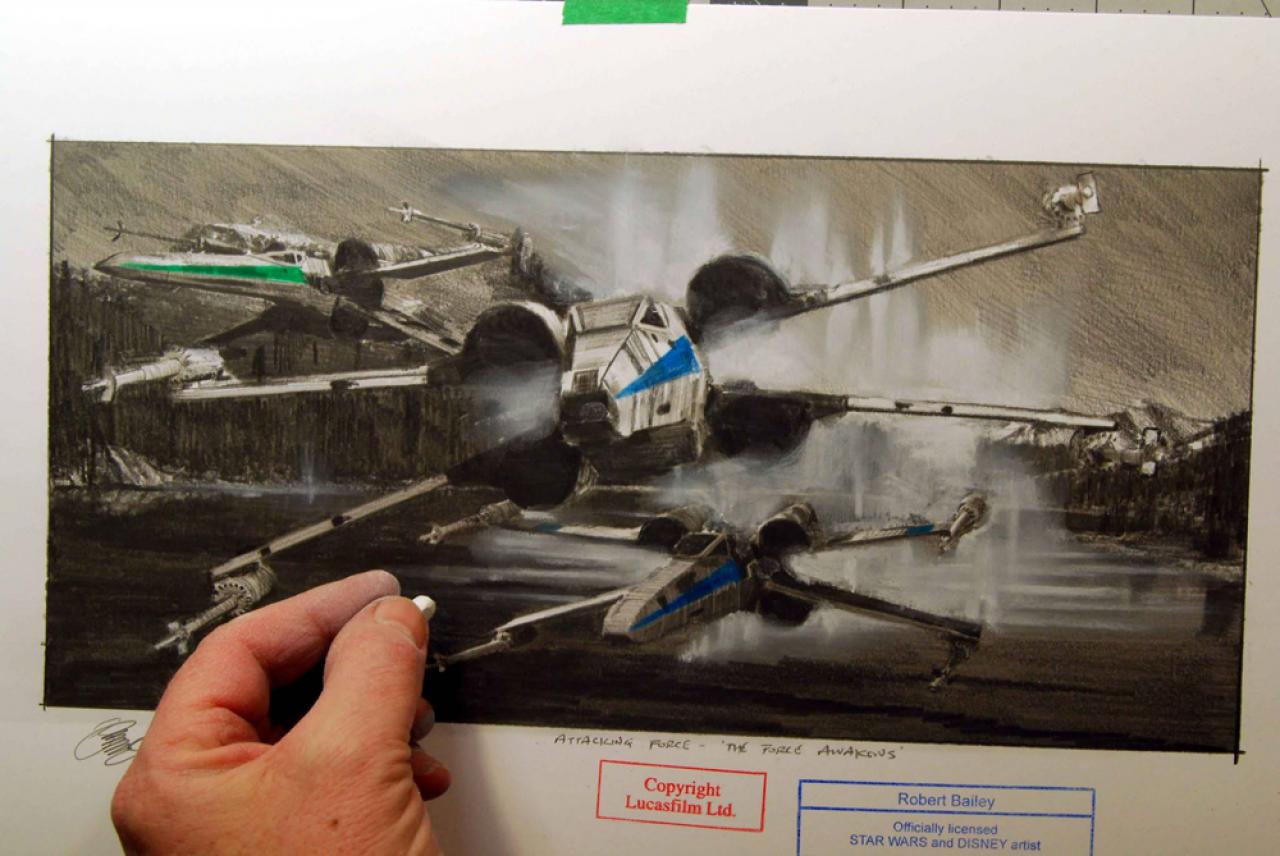 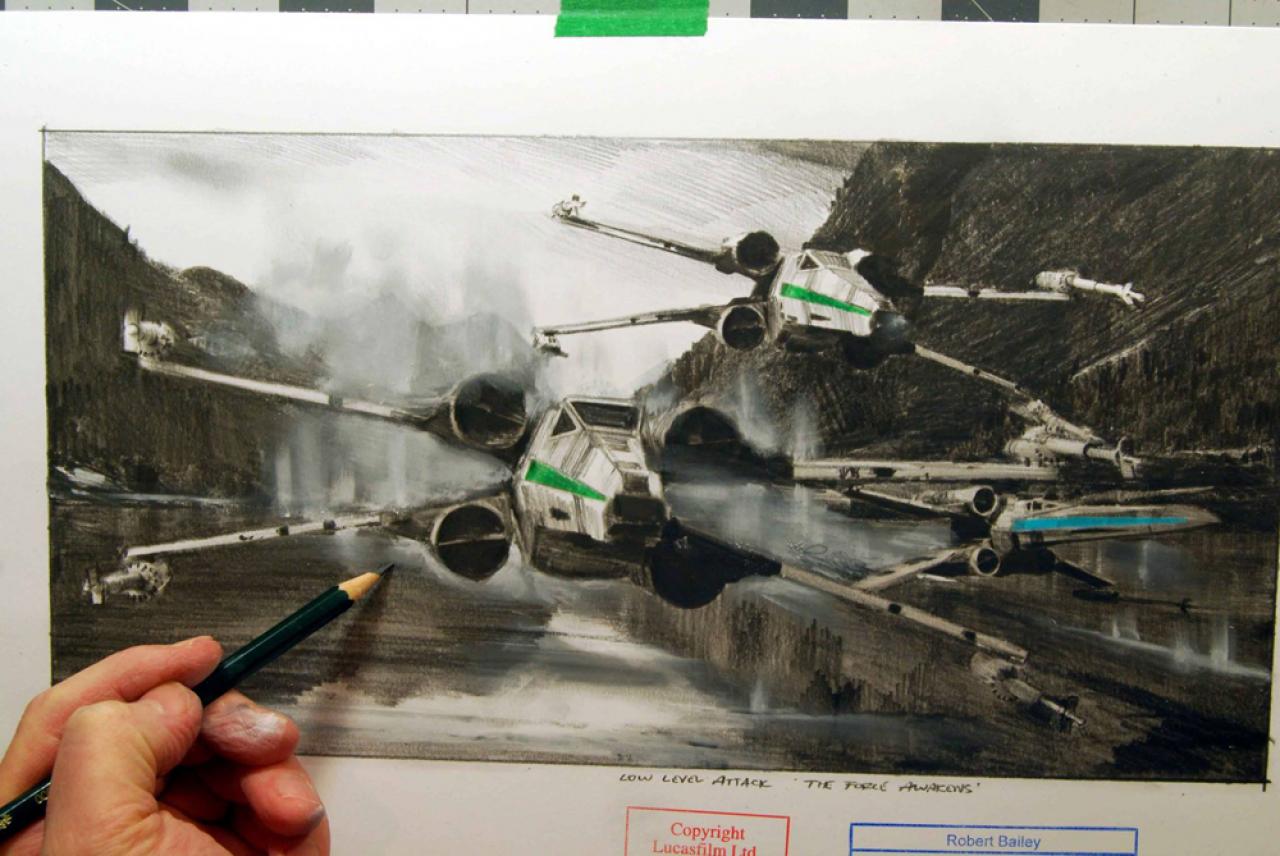 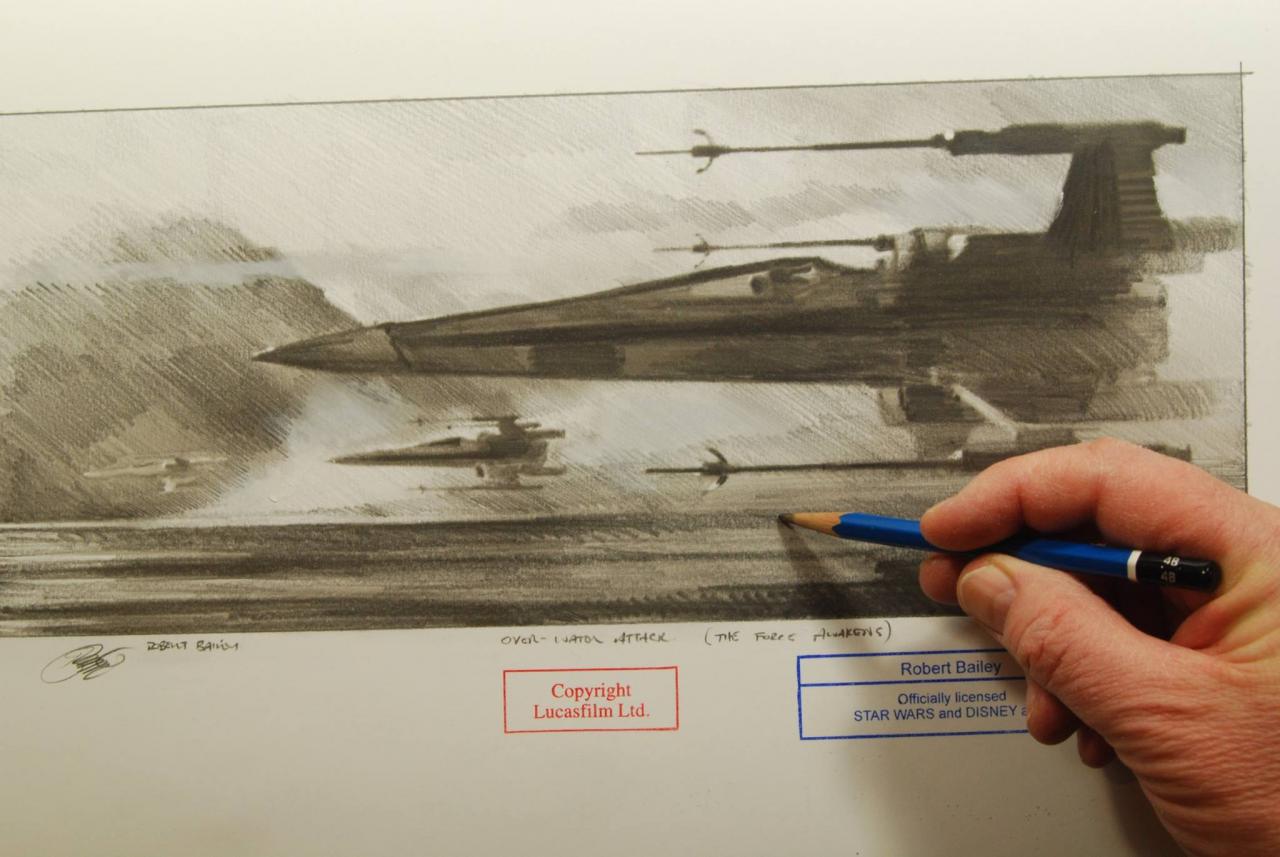 32
Has the A-Wing been retconned?
18
Where were the capital ships and bombers?
3
What's different about the new TIE fighters?

17
What's the purpose of solar panels of TIE fighters?
3
What's different about the new TIE fighters?
16
How many confirmed LGBT characters have appeared in Star Wars materials?
6
Why are there 3 TIE-fighters chasing an X-Wing in "Attack of the Clones"?
28
What's Lando been up to during the new trilogy?
10
Why do Rebels have so many [Letter]-Wing Fighters?
4
Shielding in Star Wars: X-Wing vs new TIEs
8
Did Poe Dameron make custom modifications to his black X-Wing?
9
Why was Poe Dameron re-written to survive in The Force Awakens?
6
How fast were the X-wing fighters flying in the trench during the Battle of Yavin?