Old book about sisters who can use magic

I'm trying to find the title of an old book that had either a silver or white haired wizard in it.

I remember a lot of other details that I can list

Only other thing I remember about the book is there was a blonde haired girl on the cover wearing a blue dress, and on one of the other pages there was a full color picture of the bard holding an instrument.

That sounds like The Ruins of Ambrai by Melanie Rawn. 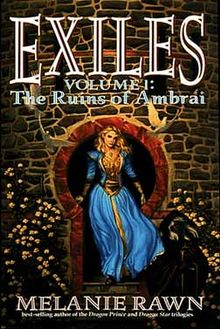 The Ruins of Ambrai is a 1994 fantasy novel written by American author Melanie Rawn. First of three in the Exiles Trilogy, it is set in the fictional world of Lenfell settled by human Catholic colonists. In the far past, the population is decimated in the Waste Wars, and the ruling class has emerged based on the ability to have healthy children. This leads to a very matriarchal society with women holding all the power and men treated as cattle.

The plot centers around a war between two rival magical factions, the Mage Guardians and the Lords of Malerris. In the midst of this war are the three primary characters, Glenin, Sarra, and Cailet Ambrai, sisters who were torn apart after the destruction of Ambrai, their home.

The book starts with Collan, who is enslaved by Scraller. Col is rescued by Gorynel Desse, and then Collan starts his work as a bard. The three girls are descendants of the Ambrai line. After a political confrontation, the father, Auvry Feiran, takes Glenin to Ryka Court. The mother, Maichen Ambrai, takes Sarra to Ostinhold, where Maichen gives birth to Cailet, but then dies. Sarra is then taken to live in Roseguard with Lady Agatine and Orlin. Cailet stays in Ostinhold as a relative of the Ostins.

The reviews at Goodreads mention coifs and a bard and, as you can see, the cover does have a blonde-haired girl in a blue dress.

To address a few of the specific details, the bard Collan (Col for short) meets one of the girls, called Sela:

Col had no idea what thanks might entail. When Sela tugged at his hand, he bent down and received a slightly sticky kiss tasting of candied violets.

The reference to St. Chevasto's cock is when he walks in on his boss Scraller (at the time he was Scraller's page) at an unfortunate moment. As he flees he sees:

Col pounded at the face of St. Gelenis First Daughter painted on the wooden door, fought with the gilded galazhi-horn handle the Saint smirked at: it was St. Chevasto's cock.

Coifs are used to hide the hair on men:

The hated coif was a woven hood that fit tightly to the skull and fastened at the throat with buttons or, in the case of Bloods and the First and Second Tiers, sigil pins. Modesty dictated that every male's head be hidden from brow to nape. Not a single hair could show.

8
YA book about a human girl who saves an cat-like elf guy, deals with racism and magic and a prophecy
5
Fantasy book - Evil Prince forces a Mage to use Black Magic; Mage is slowly dying from it Book cover background of a castle
11
Novel series about magic users with seven lives
6
Story about a magic phone that did not work
7
Fantasy book series about a teenage boy who develops powers and can enter another world
5
Book about a pair of wizards in another world
13
Identify a story about a teen boy who learns to use magic with his lizard companion
6
Book about a young man becomes a magician and soldier
28
What is the 80s-90s sci-fi book series about training gifted kids to teleport loads between planets?
9
Book about a castle full of portals to other dimensions, everyone there has some magic