Story ID from an in-text poem about dragons

I read this book, maybe 8 years ago or a bit more. It is fantasy, and humor, and I think part of it was set here and part in a low-tech magical world. I believe one of the characters was a math teacher, maybe his (?) chapter titles were math equations? It was quite important that he knew math, it might've been significant in the other world as well. and I think another was studying magic and maybe was commuting back and forth between the worlds for her study and her day job. What I recall most right now was this little poem, in the text of the book.

I have not had much luck searching for it, with keywords, quotes, or snippets. Putting the whole thing in quotes is also not working. I am hoping someone else might remember better. Thank you.

This poem appears in Hounding the Moon, by P.R.Frost. Some of the text is on Google Books (which is how I found it - I'm surprised it didn't come up for you!).

After several long moments of grieving silence, someone in the back of the room, maybe Gollum, maybe someone who'd known Bob longer, struck up a rousing chorus of a folk song on a guitar. A flute and drum joined him. Then we all burst into the best folk song ever written.

The verse you quoted is the fourth verse, as follows:

You can find the whole ditty here on Tumblr, attributed to "P.R. Frost and others" (it specifies it should be sung to the tune of "She'll be Coming Round the Mountain").

The book is the first in the Tess Noincare series, apparently. A summary of the book is offered on Amazon:

Readers who crave the fantasy equivalent of a summer movie will welcome Frost's debut, which introduces Tess Noncoiré, a widowed writer who has joined the Goddess-worshiping Sisterhood of the Celestial Blade Warriors, sworn to protect the dimensional portal between humanity and demonkind. Thanks to her magical bond with the wisecracking, cigar-smoking imp Scrap, who changes form to become her Celestial Blade, Tess fights evil—even in the middle of a busy schedule of appearances at science fiction conventions and bookstores to flog her bestselling fantasy novels based on the Sisterhood. When Tess saves a Native American girl from an apparent hellhound attack, she's drawn into a complex plot to open the portal between Earth and the demon realms.

I can't verify the specifics of what you said, but it does offer the idea of a double life - someone commuting between a day job selling books, and a world fighting demons. It also sounds like it mixes fantasy and humour. I'm not sure about the math teacher.

It was first published in 2006, so "eight years ago or more" would fit.

This is the cover - no dragon, but a small imp-like creature: 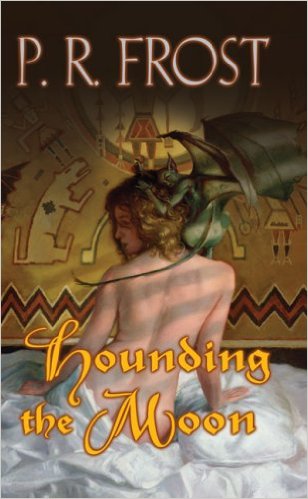 Not the answer you're looking for? Browse other questions tagged story-identification novel dragons quotes or ask your own question.

19
Book about Dragons Ending (Turning to stone)
3
2000s novel with dragons and a boy with a book
11
Identify this YA book series about dragons, acid blood, and dangerously cold nights
12
Looking for a book with two main characters and dragons in the plot
5
Book-Identification: Axe wielding protagonist and a dragon
6
A book about a boy raised by dragons
26
Books about dragons and war from a cat-loving author
5
Recent book about a disease that turns people into half-dragons