Did this character lose a limb in “The Force Awakens?”

Inspired by this answer which states limb loss as a recurring theme, I started thinking about the final lightsaber battle. After watching The Force Awakens the second time, I was not sure if

lost a limb or just lost his lightsaber. We definitely see

So knowing that context:

I re-watched the film. No screenshots yet but the very last film moments before the chasm opens shows Ren lying on the snow, rising to a half-sitting position with his torso facing the screen square-on. His hand is clearly still attached and moving (he raises his forearm before raising his torso).

This is confirmed in the novelization by Alan Dean Foster, where in the entire fight with Rey, his biggest injury is described as:

.. Unarmed, he raised a hand and utilized the Force to fend off one slashing blow after another, until finally her fury penetrated his remaining defenses. Taking a glancing blow to the head and chest, he went down, a prominent burn slashed across his face. Weakened, he reached out toward his lightsaber, trying to draw it to him.

There's no indication that Rey chopped Ren's hand off.

Ren extended a hand, calling on the Force to ward off her attacks. At first it worked, as she slashed into the iron shield of his will, but then her blade cut across his face. It burned.

He looked up at the girl whose lightsaber hovered over his chest. He shivered under the coldness of her stare. He who had been so eager to kill was not eager to die. Kylo Ren was afraid.

The girl withdrew from him.

Rey stood above him with her lightsaber raised. He was defenseless. She could strike him down right then and end it all.

Ren gets up again but she HITS HIS SABER'S HILT -- HIS BLADE GOES FLYING OFF, TUMBLING INTO THE SNOW -- and she SLASHES AGAIN AND AGAIN AND HITS KYLO REN SQUARE IN THE HEAD AND CHEST. HE GOES DOWN, SUDDENLY A FEARFUL MAN, A LARGE BURN SCAR SLASHED ACROSS HIS FACE! He still reaches for his saber. And she could kill him -- right now, with ONE VICIOUS STRIKE! 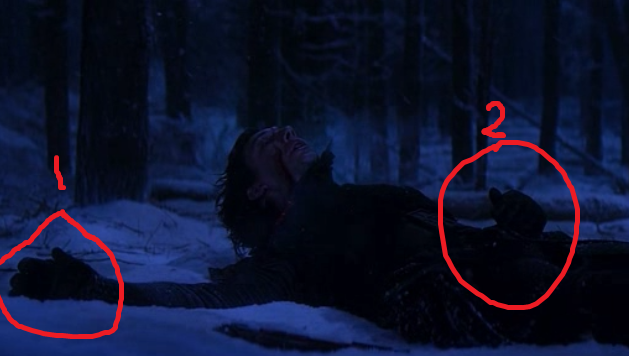 I think a lot of people misunderstand this issue. The question should be not "if" he lost his hand, it should be, "Did he ORIGINALLY lose his hand in one version of the movie and did not lose it in another version, with them putting the two shots together by accident?"

If you watch it, you can clearly see that he has two hands after fighting Rey, but if you watch the scene right before that, he clearly has his left hand lopped off. It isn't a piece of fabric, it isn't a lightsaber, it isn't something else, it is his black, cold, lifeless, gloved hand. It falls, and sways back and forth for the shortest amount of time.

Everyone gets all bent out of shape demanding that it is something else making every excuse even referencing materials out of the book, but watch it in slow motion... it's his hand. Watch it frame by frame backwards, you can literally trace the severed hand (you can identify a finger a thumb waving from it) from it's glorious moment of being sliced off to being back onto his arm! It's crazy, but it is definitely cut off.

1
Was Kylo Ren's hand cut off?
19
Which predictions of the Force Awakens: Darths & Droids Bingo were correct?
11
What happened to Kylo Ren?
9
The Force Awakens Easter Eggs?