What happened to these trainees?

In the film, Han says:

“He was training a new generation of Jedi. There was no one else left to do it, so he took the burden on himself. Everything was going good, until one boy, an apprentice, turned against him and destroyed it all. Everything Luke had worked toward: gone. Luke felt responsible. He walked away from everything.”

So what became of this "new generation of Jedi?" The way Han phrases it, it is pretty clear that the betrayer was not the only apprentice. Even if they never completed their training, where are there other people that

learned the ways of the Force from Luke?

He [Ben Solo] was corrupted to the dark side of the Force by Supreme Leader Snoke, and wipes out all of Skywalker's other apprentices.

Taking the name Kylo Ren, Ben left his uncle's new order behind and killed all of his fellow apprentices.

The main Wookieepedia article on this event is here.

Curiously this is not stated explicitly in the film, but it's very strongly implied: Han says he destroyed everything Luke had built, and in Rey's vision you see him surrounded by bodies.

According to the King of Star Wars DVK, it's not stated explicitly in the novelisation either, despite Wookieepedia's citations to it (ah, those Wikias and their poorly-cited claims!). The best we have is a quote from Han which is pretty much identical to the one from the film which is mentioned in the question. The Visual Dictionary goes into a little more detail, but it's still not conclusive: 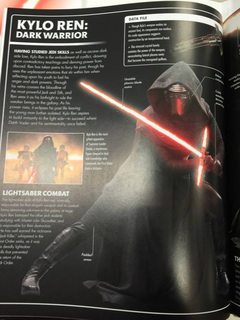 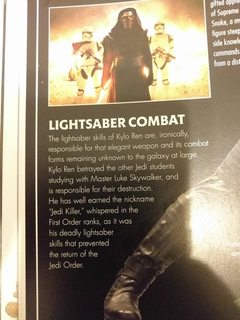 Kylo Ren betrayed the other Jedi students studying with Master Luke Skywalker, and was responsible for their destruction. He has well earned the nickname "Jedi Killer", whispered in the First Order ranks, as it was his deadly lightsaber skills that prevented the return of the Jedi Order.

It seems the most we can say at this stage is that Kylo Ren destroyed the whole new Jedi order, and definitely killed at least some of the other apprentices. Others might have fled or, as @user568458 suggests, been persuaded or coerced to the Dark Side like Kylo.

4
In The Force Awakens is there any evidence of other Jedi?

6
Is there evidence that Lucas intentionally introduced similarities between Episodes I and IV?
10
When do a Jedi and a Sith become ready?
33
Why did Han own a training remote?
10
Where does Rey currently stand in the traditional path of progression to Knighthood?
1
Did Darth Vader feel remorse for killing Jedi?
19
Where did Luke and Rey get their background information?
8
What did Luke actually do to evidence being considered a great Jedi...?
9
Do Obi-Wan Kenobi and Yoda know these characters are alive during the time of the Original Trilogy?
9
Did Palpatine really think Luke could become a Jedi?
7
Where was Luke's Jedi Temple/Academy located?