What happened to Captain Phasma after The Force Awakens?

In The Force Awakens, we encounter Captain Phasma, who looks like the leader of stormtroopers, and there is something that bothers me with her...

When Han, Rey, etc encounter her, they threaten her with death, and it looks like they killed her by throwing her in a garbage compressor.

So here is my question:

Is she actually dead? Did she die in the explosion or killed by the "nice guys"? Did she manage to escape the same way Kylo Ren did?

Before The Last Jedi

It appears that Captain Phasma has indeed survived.

As this article says,

“She’s an important character, a baddie in the best sense of the word,” Lucasfilm President Kathleen Kennedy confirmed, without revealing what Captain Phasma will be up to in Episode VIII, which is set to debut in 2017.

The original Los Angeles Times article can be found here:

But you won't see Phasma tapping out after being carelessly knocked into a sarlacc pit like a wobbly toddler. Kennedy has big plans for Phasma and confirmed that the captain will carry on into the next movie. "She's an important character, a baddie in the best sense of the word."

Phasma, or the Chrometrooper as fans have dubbed her because of the custom silver armor she wears as a sign of her authority, commands the Stormtroopers of the First Order. But it wasn't talk of villains that intrigued Christie, rather Kennedy's thoughts on the status of female heroes.

"Kathleen Kennedy said to me, 'Have you ever Googled 'female heroines'? I said, 'No,' and she did it for me. If you do it, there are a lot of scantily clad women. Now women should be allowed to dress exactly however they choose, but the idea that you Google female heroines and there isn't a diverse range of examples that come up, I find it a bit depressing."

In an interview, J. J. Abrams revealed nothing about Phasma's role in future films, save that Christie is his "favorite [actor]".

With the release of Episode VIII in December 2017, we see Captain Phasma return, albeit briefly (so she's alive!). After Rose and Finn, along with DJ, sneak onto Snoke's flagship,

They are captured by soldiers, and eventually brought before Captain Phasma and her stormtroopers. DJ betrays the Resistance, and Rose and Finn are about to be executed by Phasma, before Vice Admiral Holdo rams the flagship.

In the ensuing chaos, Finn battles Phasma in single combat, and eventually

Finn defeats her. The floor underneath Captain Phasma gives way, and she falls into the fireball beneath.

Any role Phasma may play in Episode IX is currently speculative for those of us not in the know. I can get back to you on whether or not she survives in approximately 2 years.

Kathleen Kennedy has confirmed in an interview that:

But you won't see Phasma tapping out after being carelessly knocked into a sarlacc pit like a wobbly toddler. Kennedy has big plans for Phasma and confirmed that the captain will carry on into the next movie. 'She's an important character, a baddie in the best sense of the word.

But no more detail than that has been revealed.

From this interview with the actress, Gwendoline Christie:

Lucasfilm head Kathleen Kennedy said in a recent interview that Captain Phasma is going to play a role as the series continues. Have you gotten any indication of what that role might be, and do you have any ideas yourself of where you’d like to see her go?

I have not had any confirmed indication of that, that I can communicate with you currently. How about that? (laughs)

This is currently unclear, but signs point to her having survived.

This article from the LA Times keeps being passed around as being confirmation from Kathleen Kennedy that Phasma will appear in Episode 8.

This passage claims that Kennedy confirmed to the newspaper that Phasma would return, but offers no direct quote to support that.

The first female villain in a "Star Wars" movie, played by Gwendoline Christie (who made waves on "Game of Thrones" as Brienne of Tarth), is already setting sights high. Some are comparing Phasma to fan favorite Boba Fett. "Which means she makes a lot of impact but she's not at the forefront of the action all the time," Christie says.

But you won't see Phasma tapping out after being carelessly knocked into a sarlacc pit like a wobbly toddler. Kennedy has big plans for Phasma and confirmed that the captain will carry on into the next movie. "She's an important character, a baddie in the best sense of the word."

We have literally no idea. No mention of Phasma is made after that scene in either the movie or novelization. 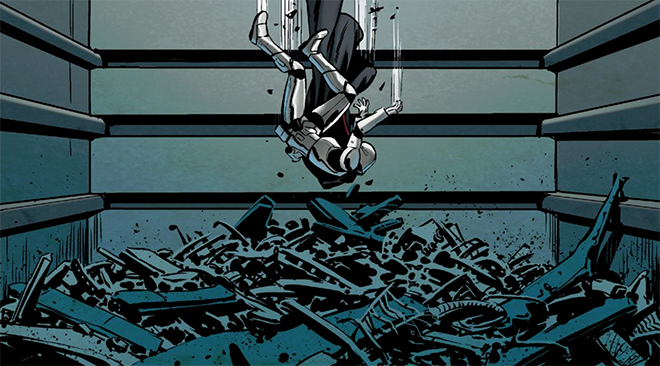 She didn't stay there for long, but was out within a moment. 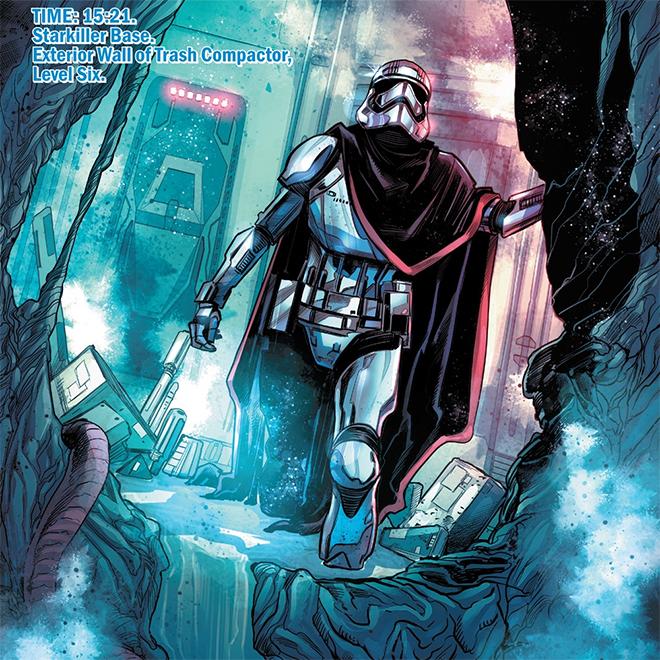 Phasma was most concerned about the records of her lowering down the shields of Starkiller Base and she hurried to delete them, only to discover that Lieutenant Sol Rivas had got the files before her. She decided to blame it all on him which led her chasing him on the surface of the planet. On her way Phasma briefly witnessed the lightsaber duel of Kylo Ren and Rey, but did not interfere. 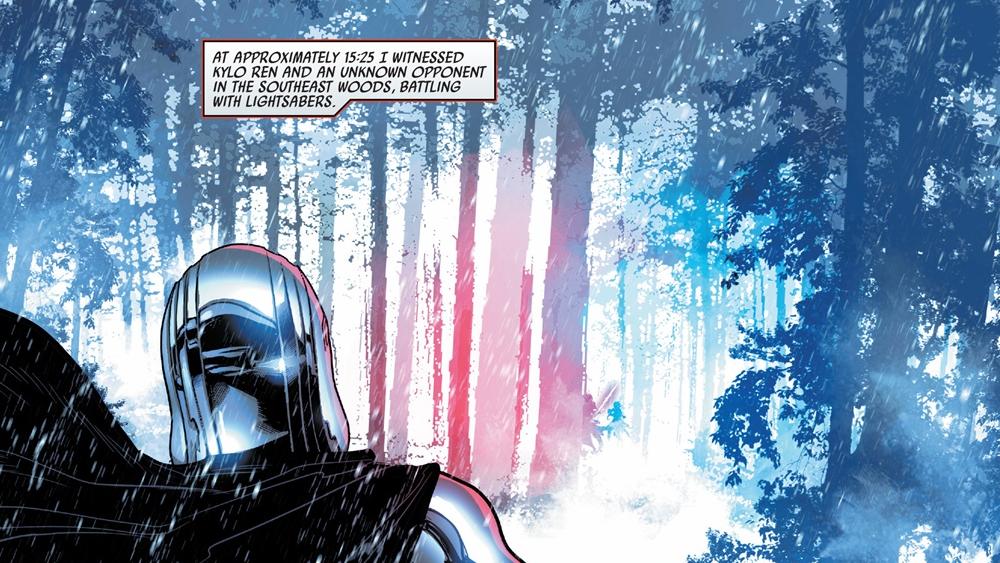 Rivas escaped to the planet Luprora, but was followed by Phasma and a TIE pilot, TN-3465. Eventually she killed them both in order to cover up her transgression. When done, she returned to the Finalizer and reported General Hux about Rivas' treason. 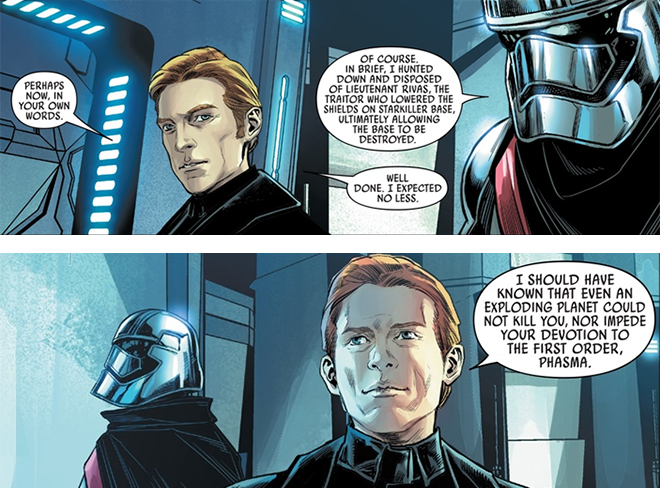 Interestingly, Hux mentioned even an exploding planet could not kill Phasma, so who knows, this could be a hint about the future...

Currently, we don't exactly know what happened to her.

However, we do know that she did made it off Starkiller Base, as she is confirmed to be in Episode VIII.

While they didn’t show her getting off the weaponized planet before it exploded, the confirmation of her Episode VIII involvement tells us she made it off in time and will be back to cause trouble in an expanded capacity.

18
Why do Rey and Leia hug in The Force Awakens?
11
How did Rey know how to do this?
23
By the end of The Force Awakens, who knows about Kylo Ren's family?
8
What did Kylo Ren use to ‘drive’ his Force activity?
12
What was the initial escape ship of Rey and Finn?
3
What does Rey know about Darth Vader?
9
Who's "they" in this quote?
14
How did Rey get her blaster back?
5
Why did Sidious never seek to turn Rey toward the dark side of the Force?