A long time ago, I watched some Star Trek episode (Mr. Data was in it) when the Enterprise suddenly accelerates to the huge speed, faster than warp 9, and came to the end of space in short time (maybe a few seconds) and they can see some blue bubble on their screen.

What episode was this?

Sounds like "Where No One Has Gone Before", from TNG's first season. The episode involves the Enterprise being subject to a warp drive test that goes catastrophically wrong:

Kosinski: All right, here we go.

(Wesley watches the Traveller make adjustments on his console, while Kosinski taps at him. The Traveller turns to smile at Wesley)

Kosinski: What are you doing?

(Consternation. The warp core appears to be racing. The Traveller puts his hands on the console and partially vanishes. The Enterprise takes off at ridiculous speed)

Picard: What is our velocity?

Data: It's off the scale, sir.

LaForge: Well, sir, according to these calculations, we've not only left our own galaxy, but passed through two others, ending up on the far side of Triangulum. The galaxy known as M Thirty Three.

Picard: That's not possible. Data, what distance have we travelled?

The crew (and the scientist conducting the experiment) try to repeat the effect to get home, but that also doesn't go to plan:

Data: According to the instruments, sir, our speed never exceeded warp one point five.

Picard: Yes, but where is this place?

Data: Where none have gone before.

Picard: Captain's log, stardate 41263.3. Instead of returning to our own galaxy, the Enterprise has gone forward to a place in the universe which is uncharted and unknown. Our present position puts us at over a billion light years from our galaxy.

Mrs. Picard: You look tense, Jean-Luc. Come and have a cup of tea.

Mrs. Picard: I'll make it good and strong, the way you like it. We will have a nice long talk.

Picard: This can't be. You've been

Mrs. Picard: Dead? But I'm always with you, you know that.

Picard: Yes, I've felt that. But why now, suddenly.

Mrs. Picard: You mean out here? At what you say us the end of the universe? Or do you see this as the beginning of it?

Picard: We believe it the outer rim.

It's after this second warp jump that they reach the "end of the universe", and see the "blue bubble" you're remembering: 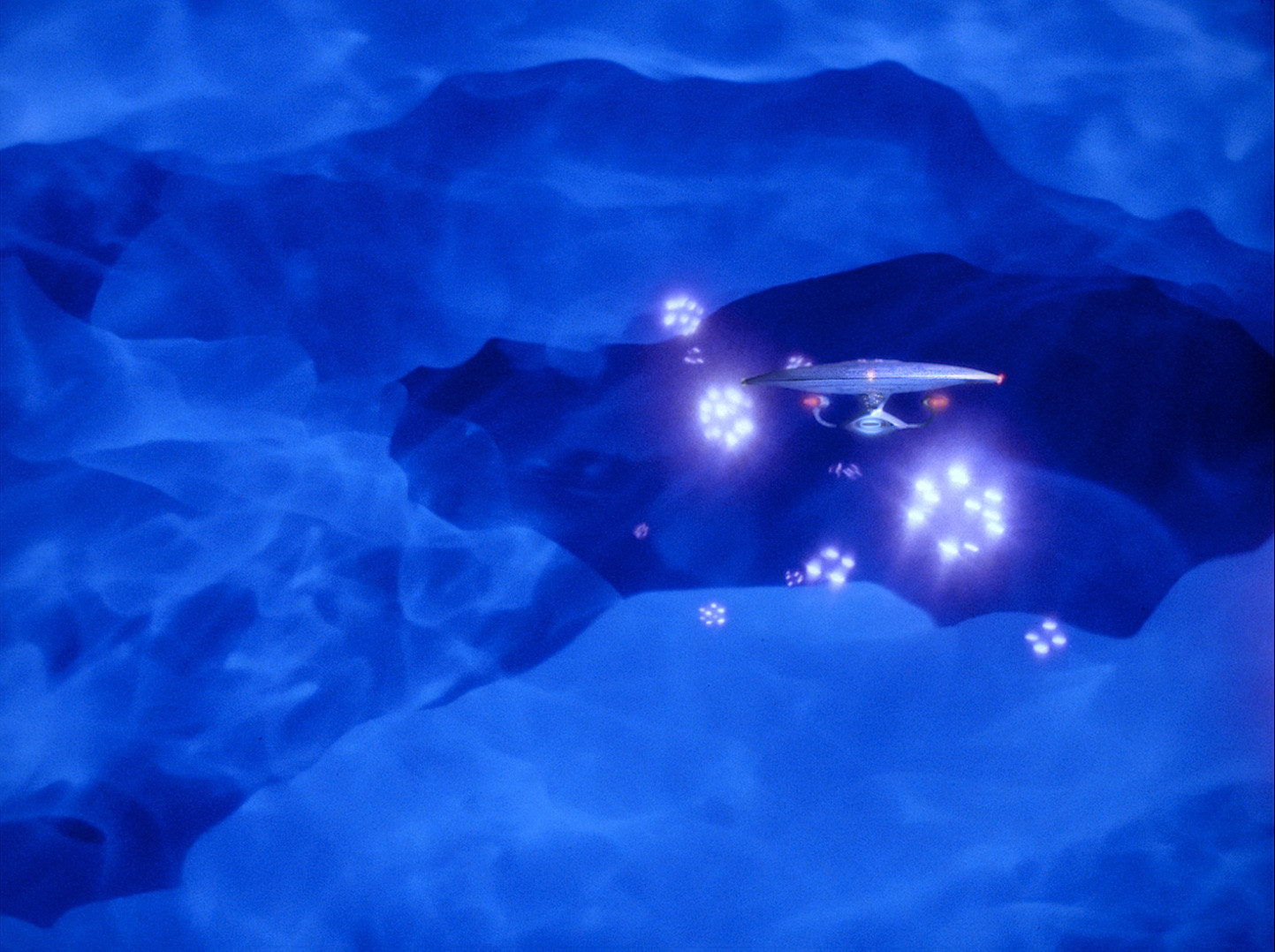 Not the answer you're looking for? Browse other questions tagged star-trek star-trek-tng star-trek-data episode-identification or ask your own question.

4
Star Trek TNG episode with three timelines and a trial about mankind's right to exist
22
How does Star Trek faster than light communication work?
16
How could the Picard Maneuver confuse sensors from the Warp Era?
8
What was this Giant wall in Space?
2
Was Star Trek’s “Time Warp” ever developed past episode one of the TOS?
25
Are those stars moving past the window when the ship is at warp?
21
Why don't Star Trek vessels experience time dilation while travelling at impulse speeds
15
Short story parody where Kirk and Enterprise crew are trapped in a region of space that doesn't have Special Relativity?
8
Has there ever been a warp / non-warp collision?