I read this book when I was younger (before 2010). I don't really remember much of the plot or title or anything, but I have this recurring picture and feeling about it and I really want to know what book it is, please help me.

I'm pretty sure it's a fantasy, children / young adults, gloomy cover and an all-over gloomy feeling. The main character is a boy, and he stays in this big house / mansion. I think he has a teacher of some sort and they stay in a dark room / basement-like area. And I think there is this grandfather clock, and that it's quite important, maybe it has something to do with time travel?

I know this is not very much to go on but I would appreciate any help I can get.

Time travel and grandfather clock put me in mind of Philippa Pearce's Tom's Midnight Garden. It fits most elements of your story except the parts about the teacher and the basement. See the Wikipedia description (emphasis mine, less relevant parts removed):

Tom is sent to stay with his Uncle Alan and Aunt Gwen. They live in an upstairs flat of a big house with no garden, only a tiny yard for parking. The elderly and reclusive landlady, Mrs Bartholomew, lives above them. Without exercise he lies awake after midnight, restless, when he hears the communal grandfather clock strangely strike 13. He gets up to investigate and discovers that the back door now opens on a large sunlit garden.

Every night the clock strikes 13 and Tom returns to the Victorian era grounds. There he meets another lonely child, a girl called Hatty, and they become inseparable playmates. Gradually at first, Hatty grows up and passes Tom's age; he comes to realise that he is slipping to different points in the past.

On the final night before Tom is due to go home, he goes downstairs to find the garden is not there. He desperately tries to run around and find it, but crashes into a set of bins from the present day courtyard, waking up several residents. The following morning, Mrs Bartholomew summons Tom to apologise, only to reveal herself as Hatty, having made the link when she heard him call her name. The events Tom experienced were real in Hatty's past; he has stepped into them by going into the garden at the times she dreamt of them.

Hatty / Mrs Bartholomew, as an old lady, may possibly be the 'teacher' you're thinking of, while the gloomy courtyard that's outside the back door in the present day may be the 'basement'. Or maybe you're confusing two books together in your head. Or I may be completely wrong!

A longer shot is the book-within-a book, the Fillory and Further series by the fictitious Christopher Plover, found in Lev Grossman's The Magicians (in which some kids discover that the fantasy world in their favourite novels is in fact real). Quoting directly from The Magicians itself:

In the foreground, every summer for three years, the children leave their various boarding schools and return to Cornwall, and each time they find their way into the secret world of Fillory, where they have adventrues and explore magical lands and defend the gentle creatures who live there against the various forces that menace them.

But there was a more seductive, more dangerous truth to Fillory that Quentin couldn't let go. It was almost like the Fillory books - especially the first one, The World in the Walls - were about reading itself. When the oldest Chatwin, melancholy Martin, opens the cabinet of the grandfather clock that stands in a dark, narrow back hallway in his aunt's house and slips through into Fillory

I am not sure which story you are referring to but have recently read a story to my children which fits somewhat the description that you gave. It is called The Time Travelling Clock by Derek Jee. It was a really good story which taught children about historical events. 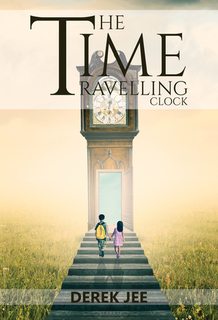 Lara and her brother Adam love going to see their grandfather but this time their visit is a little different. Having discovered a magical clock, both Lara and her brother have no idea of the adventures that they have in store...
The Time Travelling Clock is an exciting adventure story which combines history and adventure and will appeal to all children and young adults.

Also, sounds a bit like Goosebump's Cuckoo Clock of Doom

Probably not, but posting it just in case. 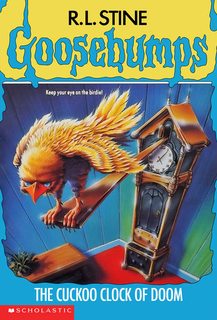 Tara the Terrible. That's what Michael Webster calls his bratty little sister. She loves getting Michael in trouble. Making his life miserable. Things couldn't get any worse. Then Mr. Webster brings home the antique cuckoo clock. It's old. It's expensive. And Mr. Webster won't let anyone touch it. Poor Michael. He should have listened to his dad. Because someone put a spell on the clock. A strange spell. A dangerous spell. And now Michael's life will never be the same again..

It's a cuckoo clock, not a Grandfather clock, and there's no mansion, but the main character is a boy and there's time travel (specifically a time loop).

Not the answer you're looking for? Browse other questions tagged story-identification time-travel childrens-novel or ask your own question.

18
Does the television series Stargate SG-1 show any evidence of Cameron's time travel affecting the original timeline?
11
Looking for a fantasy love story with time travel
8
Quartet of books about a boy discovering a secret passage in a stone circle
5
Name of movie involving time travel with a ruby ring?
23
Movie about a teenager discovering time travel
9
Book Identification: 80s or 90s horror
17
First book of a series: boy disappears from his life, becomes time travelling agent
6
Book with angels as crows and anger as plant
3
Book about winged boy who befriends two children?