I'm searching for a children's book I read from the library in South Africa in the 1980's. Cannot remember the title or author. It was a orange hard cover book,with a black drawing on the front, not more than 100 pages.

All I remember about the plot is that its mainly about a little girl named Endamion who lives with a population of people on the moon in the future,there is a description of the dome and living structures/houses etc. She reads about Earth and longs to see it. Somehow she gets to Earth and visits with a family there.

Can someone help with the title and/or author of this book?

The Matthew Looney books chronicle the adventures of a brother and sister, Matthew and Maria Looney, who live in the town of Crater Plato, on the Moon. In Beatty's stories, the inhabitants of the Moon are a fully developed non-human civilization. Beatty's fictional Moon inhabitants are an indigenous species, living on the Moon without the assistance of spacesuits, "breathing" vacuum instead of air. A recurring theme in the books is Matthew's desire to know more about outer space, especially the Earth. At the beginning of the series, he looks up in the sky at the Earth and wonders if anyone is living on it.

Similar to most child characters in children's literature, the Looney kids must deal with parents, friends, and rivals, along with the normal array of school-age joys and concerns. Their father works in the "powder factory," but Matthew is captivated by the notion of an exciting career in the military like his uncle, Rear Admiral Looney. Maria, his younger sister, prefers playing sports after school and getting in trouble with her best friend and rival, Hester.

During their adventures, the Looney kids face space pirates, a war between the Moon and Mars, the "discovery" of life on Earth, and the invasion of an Earth circus.

Book 5 featured Matthew's sister, Maria Looney and the Red Planet. There are others in the series, but that is the one I remember. It does have a reddish orangeish cover. 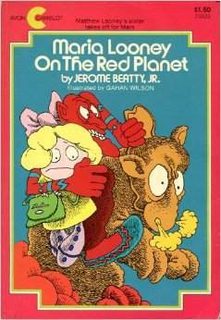 15
Children's novel: three children (plus dog?) travel to the Moon in pretend spaceship turned real
5
Science Fiction Novel with two Androids on a "New Earth" planet; named The Admiral and The Sergeant
13
I remember a children's book with math and a world inside a book
6
Children's science fiction book series and tv show
5
Children's novel about a magic spring, called something like "Down the Mountain"
5
A Science Fiction novel regarding Earth, the Moon & Venus
10
Looking for a specific children's time and space travel book 50s or 60s
6
A girl raised by a robot, utopian children's book
5
1990s children's book with environmental message about a child flying in his bed