Why does the Marvel character Mantis refer to herself as "this one"?

In Marvel comics the character Mantis commonly refers to herself as "this one" and also "she." This is a very frequent occurrence but I have been unable to find any explanation of the particular reasons behind why she does this, so I acknowledge that there may be no reason for this, although it seems unlikely.

Is it ever explained (in or out of universe) why Mantis refers to herself as "this one"? 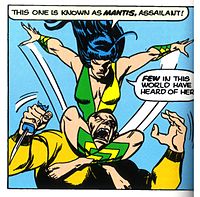 Within the marvel universe I don't know.
It's called Illeism

Illeism /ˈɪli.ɪzəm/ (from Latin ille meaning "he, that") is the act of referring to oneself in the third person instead of first person.

Illeism is sometimes used in literature as a stylistic device. In real life usage, illeism can reflect a number of different stylistic intentions or involuntary circumstances.

As far as I know its' not revealed in canon, but we can surmise:

Mantis is of Asian ancestry (obviously):

The enigmatic Mantis traces her roots back to the family of Vietnamese crimelord Monsieur Khruul who, disapproving of his sister Lua's marriage to German mercenary Gustav Brandt, hunted the couple across Indochina¹.
¹Source

Created by Steve Englehart who also create the other martial arts expert Shang Chi indicating that he must have at least a cursory acquaintance with Asian customs.

Look at this question it's not unheard of as a speech mechanism.

Aside: Mantis will apparently feature in Guardians of the Galaxy Vol. 2.
In October 2015, del Toro was confirmed to return and Pom Klementieff was cast as Mantis. 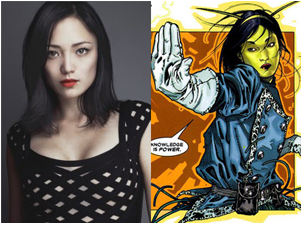 23
How many characters have appeared in both Marvel and DC comics?
7
Does Howard the Duck ever cross into Earth 616?
12
How does Zola end up like this in The Winter Soldier?
17
Why did the main antagonist truck in “Maximum Overdrive” (1986) have a Green Goblin mask on its front grille?
30
Has any Marvel or DC comic ever shown graphic nudity?
11
Does the Multiverse exist in the MCU?
6
Why was capturing this character so easy?
13
What is the true extent of Rogue's power?
4
Can Captain Marvel break the fourth wall?
27
How does Rogue from the X-Men fly?