Could Hermione change her skin colour?

Background: A sequel of the Harry Potter series (Harry Potter and the Cursed Child) is due to arrive in London as a theatre play in about May 2016. Some people are unhappy because Hermione Granger is going to be played by a black actress, Noma Dumezweni. According to JK Rowling, "White skin was never specified".

But my question is: Would a 30-year-old Hermione Granger, with a lot more experience than the teenager that we read about, and possibly more power, be able to permanently change her skin colour if she wished to do so? ("permanently" meaning that any effort keeping up the changed appearance would affect her daily life very little).

rand al'thor shows that Hermione could alter her complexion and there are dozens of spells that can transform wizards into other shapes, colors, animals, and people. Victor Krum turns into half a shark. Barty Crouch Jr. spends a year as Mad-Eye Moody. Peter Pettigrew lives for decades as a rat. The magic surely exists for "Emma Watson" to spend the duration of "The Cursed Child" looking like "Noma Dumezweni" but it isn't productive to try to incorporate recasting into canon.

Lavender Brown was played by two different black actors and one white actor. 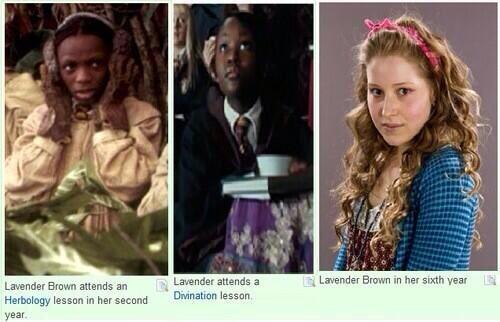 If changing your appearance to another race requires "stronger," "more experienced" magic as the question suggests, why is a not-very-clever, 12-year-old Lavender so good at it? 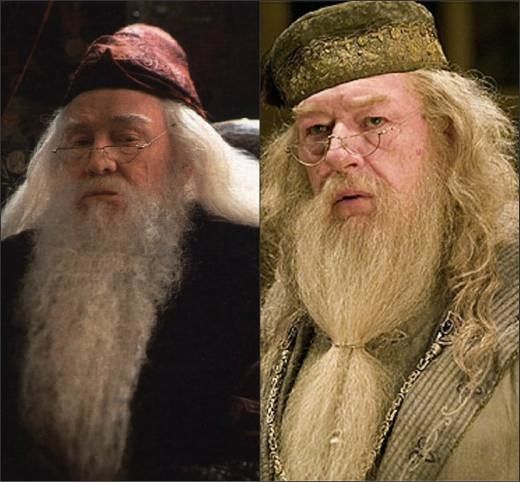 We aren't having a discussion about when and why Dumbledore changed his face, or if it's possible he's a Time Lord. This conversation only arises when it's about race.

We're used to holding separate canons in our heads across media (books to film) but here's something that happened within the movie universe that is not getting the same attention. Maybe because the character was white by the time she got a speaking role?

As a person who works in professional theater, I can tell you that plays are different than books and films in that they are written to be performed many times by different casts on different sets and with different directorial visions. Generally in theater, "canon" is the text of the play, not the choices of the production.

JK Rowling (who also contributed to the films) collaborated on the script for the play with Jack Thorne (who is listed as the playwright, based on a "story by JK Rowling") and Rowling has tweeted that the "story" of Cursed Child is canon. 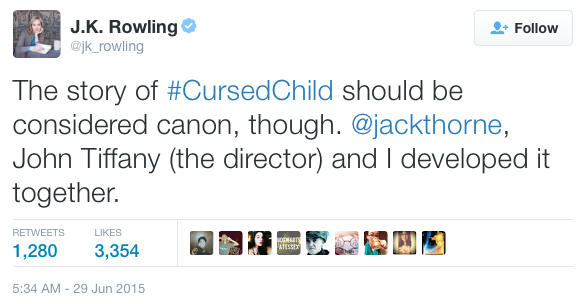 However involved and supportive Rowling is, the specific production will be created by many artists, much like the films were. Rowling has been enthusiastic and supportive of many official, derivative works by other artists (including the films, book artwork, etc.) without suggesting that they alter her canon, and that is a good way to understand the gap between the fact of the story of The Cursed Child and the details of any given production of The Cursed Child.

Another theater example: Casting people of color in Hamilton doesn't change the fact that the founding fathers were white, but it does do something more nuanced and important.

This is mostly just to say that the tunnel vision of "canon" can be unhelpful to understanding a work of fiction, especially when it works to exclude the same non-white, non-cis, non-male people that science fiction and fantasy has a problematic history of excluding.

Well, there is a Colour-Changing Charm, probably taught in 5th-year Hogwarts Charms class, which we know applies to animals, so it may apply to humans too:

On the whole, Harry thought it went rather well. His Levitation Charm was certainly much better than Malfoy’s had been, though he wished he had not mixed up the incantations for Colour Change and Growth Charms, so that the rat he was supposed to be turning orange swelled shockingly and was the size of a badger before Harry could rectify his mistake.

-- HP and the Order of the Phoenix (emphasis mine)

So it's quite plausible that Hermione would be able to cast such a charm on herself, in effect 'dyeing' her own skin. However, you're missing a more important point:

the difference between what we call 'black' and 'white' people is more than just skin colour.

If you performed magic on an ordinary pale-skinned person so that their skin instantly changed colour to black, they wouldn't look identical to a naturally black-skinned person. There are more subtle differences in physical appearance than just skin colour. I promise you, if you took a photograph of Emma Watson and changed the colour of her skin from light to dark, she still wouldn't look like Noma Dumezweni!

(Side note: why are people getting so worked up about this? I'm sure ND will do at least as good a job of portraying Hermione as EW did. Hermione's personality could fit equally well with a person of any colour skin.)

Wizards can Transfigure themselves - presumably they can also change their color.

In their sixth year at Hogwarts, students begin learning human transfiguration. Their first lesson is changing the color of their eyebrows.

“But his hopes were not high, and they sank still lower after enduring a Transfiguration lesson with them both next day. They had just embarked upon the immensely difficult topic of human transfiguration; working in front of mirrors, they were supposed to be changing the colour of their own eyebrows.”
- Harry Potter and the Half-Blood Prince, Chapter 15 (The Unbreakable Vow)

Presumably they can change other aspects of their appearance as well, which should include skin color - they can change colors of one part, so they can likely change color of others, though it may be more difficult, as eyebrow color is the first step into human transfiguration. Tonks mentions that non-Metamorphmagus wizards can also change their appearance, but they will need to do it using spells or potions.

“Well, you’ll have to learn the hard way, I’m afraid,’ said Tonks. ‘Metamorphmagi are really rare, they’re born, not made. Most wizards need to use a wand, or potions, to change their appearance.”
- Harry Potter and the Order of the Phoenix, Chapter 3 (The Advanced Guard)

This implies that wizards should be able to change their appearance quite a bit once they know the required spells or potions - and from what is known this most likely applies to their skin color as well.

87
What is Hermione Granger's ethnicity?
50
How could Ron possibly believe that "Sunshine, daisies, butter mellow..." is a real spell?