Why did the Resistance expect aid from the Republic's fleet to begin with?

From this question, we can see that the Resistance is like a splinter faction that doesn't want to wait for the Republic's slow bureaucracy to take action against the First Order - a war that the Republic is reluctant to fight.

At the point in the movie where that comment was made, the bulk of the Republic fleet was gone. That had been the very first target of Starkiller base.

We learned from the opening crawl that the Republic has secretly been aiding the Resistance against the First Order. Officially, the Republic and First Order have a non-aggression pact. The Republic can't been seen openly fighting the First Order or it violates it's own treaty. So, they have been surreptitiously aiding the Resistance by giving supplies, weapons, and the assistance of their military ships whenever they can -- as long as they maintain "plausible deniability".

General Hux makes this point pretty clearly in his big speech before the weapon fires the first time. They're destroying the Republic and it's fleet of ships so they can no longer help the Resistance.

So when the Resistance decides to launch a counter attack, they know they're on their own. There's no help coming from the Republic because, for all intents and purposes, the Republic has been eliminated.

First of all, in the opening crawl, it's stated that "With the support of the Republic, General Leia Organa leads a brave Resistance."

That seems to be contradicted by everything else we're told about the relationship between the Republic and the Resistance, but there you go...

According to the novelization (as filtered through this daily dot article, but hopefully someone who's read the book can back me up) Leia had just sent an envoy, Korr Sella, to petition the Senate on behalf of the Resistance. 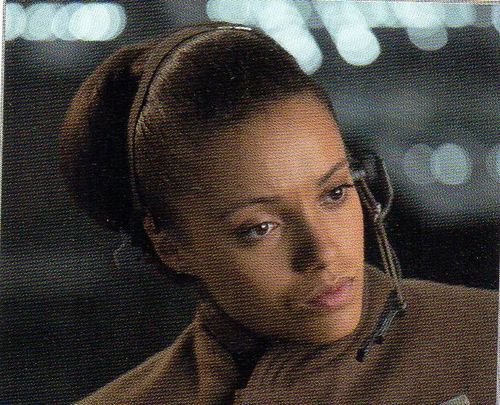 She was the Resistance's hope for aid from the Republic Fleet, so since she perished on Hosnian Prime (visible in the balcony shot) and the fleet was destroyed (visible in the long shot of the planets exploding), that would motivate the comment you referenced in the question.

2) There's someone important on that Republic Senate balcony

Just before Starkiller Base destroys the Hosnian System—including Hosnian Prime, the capital of the Republic—the camera pushes in on a balcony full of well-dressed people, including a young black woman in a uniform. Although the movie doesn't explain who that is, the novelization reveals that the character, played by Maisie Richardson-Sellers, is Korr Sella, General Leia Organa's envoy to the Senate.

Before the discovery of Starkiller Base, Leia, the head of the Resistance, sends Sella to petition the Republic for help in the fight against the First Order. Leia can't go herself, she tells Sella, because the Republic capital world isn't safe for a political pariah like her. (The Republic, which signed a treaty with the First Order after Return of the Jedi, publicly disavows the Resistance's unsanctioned conflict with it.)

The First Order has an accord with the New Republic borne from when they were still just the remnants of the Galactic Empire, as mentioned in the Visual Dictionary and the novelization. This accord, called the Galactic Concordance, includes terms of non-aggression.

Blowing up a planet or annihilating life in a whole system would definitely violate an accord of non-aggression, so if the New Republic's Fleet were still around, the Resistance (officially a "reconnaissance" organization keeping tabs on The First Order) would ostensibly rely on it for protection against the First Order.

This makes sense when you consider that the Resistance operates on D'Qar, a planet that was used by the Alliance to Restore the Republic (a fancy term for the Rebel Alliance in films IV - VI). Therefore, it makes sense that the New Republic would likely consider at least cursory protection of D'Qar from the First Order a reasonable request.

The reason is easy the republic did not want to fight. The Resistance was made up of people who did still believe that the first order is a threat to the democracy and all free people. That is why they still fought and that with the resources that sympathizers within the republic could get them.

Thus it is more or less a proxy war on the republics side. A one sided from how it sounds as the first order seemingly was more defensive than anything. As it makes sense when the Republic is not in an open war and the Resistance is coming out of Republic systems to harrass the first order.

Thus as soon as the first order would counterattack...they would have to attack a republic world and that would mean that the republic would have to act even if they don't want to (at least to save their face).

So the republic fleet WOULD have helped them out. Latest when they knew about starkiller base the republic would have had no choice than to do that anyway. As they knew what the empire did to Alderan they knew that the first order would do the same.

So the first order attacked the Republic AND in the process took most of the Republics fleet out of the picture in the process. And that is the only reason why the republic fleet could no longer help the Resistance there.

34
What's the relationship between the Resistance and the Republic?