What do different colors of stormtrooper pauldrons indicate?

In The Force Awakens, some of the stormtroopers have a colored pauldron on their right shoulder. Some of them were white. Other ones were black. And yet other ones were red.

What do the pauldron colors signify?

I guess that they indicate rank. But which ranks for which colors? Or do they indicate special job functions that have nothing to do with rank? 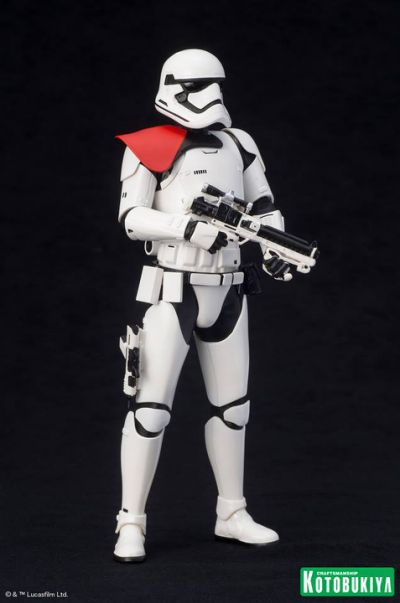 Allow me to answer with LEGO product descriptions.

In the set featuring the Stormtrooper shown in the question, the figure is described as a "First Order Stormtrooper Officer". 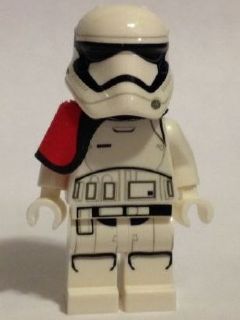 Contrast this with another set with Stormtroopers lacking the pauldron:

Lower the ramp, load the troopers and get ready to transport them into battle! This heavily armored First Order Transporter is packed with cool features, like dual spring-loaded shooters, top-mounted dual-stud shooter and hatch with space for a minifigure, pilot cabin with opening hatch and space for 4 minifigures in the hold, big engines at the rear, and hidden, transparent wheels for a cool ‘hover’ look. You can also remove the top section for easy access. Get ready to recreate incredible battle scenes from Star Wars: The Force Awakens! Includes 7 minifigures with assorted weapons and accessories: 2 Resistance Soldiers, 2 First Order Flametroopers, 2 First Order Stormtroopers and Captain Phasma. 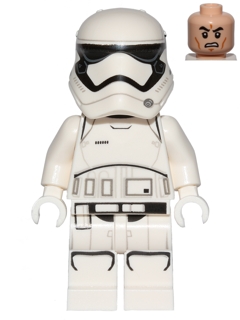 According to this, the pauldron indicates a rank of officer, at least among Stormtroopers. Other toy merchandising also describes our red-shouldered anonymous villain as a "First Order Stormtrooper Officer".

A white pauldron'd Hot Toys figure is listed as "Squad Leader", and a black pauldron one called a "Sergeant", further evidence that the shoulder piece denotes rank, and also that color likely indicates which rank.

However, it must be noted that the merchandise may not exactly be canon, or backed up by the movies. The only rank we know of for certain is "Captain", and Captain Phazma was seen to have a cape and chrome armor, not a colored pauldron.

Don't have a full color breakdown, but

These are shoulder "pauldrons".

Pauldrons were a type of armor worn by soldiers of the Galactic Republic and later the Galactic Empire. These represented the wearer's rank or affiliation. These varied in colors, for example, Imperial stormtrooper commanders wore an orange or red pauldron. The majority of sandtroopers wore colored pauldrons. Black indicated enlisted troopers, white was for sergeants, and orange for unit leaders.

The Wookieepedia material above is derived from canon and licensed sources, namely the Rebels television series and the Ultimate Star Wars guide.

Given the penchant that the First Order displays for adopting Imperial designs and uniforms, the pauldron colours may carry the same meanings in The Force Awakens, but as of this time I do not have a source.

UPDATE: The information from Wookieepedia conflicts with other sources (I imagine due to a misheard line in Rebels). See DVK's answer for correct colour interpretations, especially as far as Force Awakens is concerned.

3
In The Force Awakens what is the ranking order of the Storm Troopers?
8
When did the coloured shoulder pauldrons on stormtroopers first appear?
7
What is the rank structure of Imperial Stormtroopers?

87
What is the reason that lightsabers have different colors?
83
When Did George Lucas make up the stuff about the Sith and Midi-chlorians?
88
Why specifically was Obi-Wan Kenobi the "only hope" of Princess Leia?
25
How well known were the events of the original “Star Wars” trilogy in the general galaxy? Or was it all about clandestine special operations missions?
31
What was Darth Vader's official role (or rank) in the Empire?
31
Do we ever see regular (non-stormtrooper) ground troops?
8
When did the coloured shoulder pauldrons on stormtroopers first appear?
8
Did Poe Dameron make custom modifications to his black X-Wing?