Did Master Yoda Guess that Palpatine was Evil before Anakin turned?

I am sort of guessing this, but there were a couple of scenes that sort of caught me off guard. I was thinking about this today and I don't recall every scene but I'll give the ones I remember.

Yoda says in the beginning of the Attack of the Clones "The Dark Side clouds everything. Impossible to see, the future is."

This line seems to sort of imply that Yoda is highly suspect of something. According to the Jedi council in Episode I and Windu in episode 3, the Sith have been dead for a 1000 years, the Jedi would have sensed a return of the Sith (Jedi council), and that they wouldn't let a Sith return (Windu in Ep3). Therefore, Yoda would have thought it was something else that was clouding the future... except he didn't. It was a crucial detail that was set in the place of Chancellor Palpatine, which we (spoiler alert) learn that is Darth Sidious.

In the same scene, we also see Yoda looking suspiciously over to Palpatine after he guessed what Amidala was going to say, and he was suggesting her placed under the care of a Jedi.

Also at the end of episode 1, Mace Windu and Yoda discuss who Obi-wan killed: the master or the apprentice. They seemed to guess that it was the apprentice, and the panning shot out to Palpatine seems to imply that they were suspecting Palpatine, although it is not sure.

It is also noteworthy that in episode 3, the Jedi Council were holding surveillance on Palpatine. Did they guess that he was evil? They were certainly worried that the Chancellor was power hungry and perhaps had non-democratic/evil intentions, but where did this suspicion first arise from? And if they thought like this, than doesn't it seem logical that Master Yoda, the wisest and most powerful of them all, would have foreseen/guessed this first, before all of them?

No, they didn't guess that.

Note that what triggered Mace Windu's showdown with Sidious was Anakin telling him that he's a Sith Lord.

If they had any idea before then:

Note that they didn't "need to wait to gather information" on Palpatine politics wise to make their move - the ONLY information that Anakin gave them wasn't about Palpatine the Chancellor, but Sidious the Sith, as far as prompting Mace's arrest attempt.

What did the Jedi know?

The Jedi were groping in the dark towards the end of their existence - quite literally - and did not know who to suspect.

MACE WINDU : There is no doubt. The mysterious warrior was a Sith.

YODA : Always two there are....no more...no less. A master and an apprentice.

In Episode II, the Jedi gained more information about their enemies, and from them. From the novelisation:

"The truth," said a confident Dooku. "What if I told you that the Republic was now under the control of the Dark Lords of the Sith?"

"No! That's not possible." His mind whirled, needing a denial. He alone among the Jedi had battled a Sith Lord, and that contest had cost his beloved master Qui-Gon his life. "The Jedi would be aware of it."

"The dark side of the Force has clouded their vision, my friend," Dooku calmly explained. "Hundreds of Senators are now under the influence of a Sith Lord called Darth Sidious."

Of course, this information came from a fallen former-Jedi, one who was very soon after shown to be following the Dark Side, but it was also known by other associates of the separatists - including those who were captured and tried after the Battle of Naboo - so there was verification.

By Episode III, the Jedi knew that Dooku was the Sith Lord Darth Tyranus - we saw this confirmed in the Clone Wars series - and were using the name Sidious for their unknown second Sith opponent. They still did not know who Sidious was, however. The Epsiode III novelisation gives us this sequence:

"We have circumstantial evidence that traces Sidious to Palpatine's inner circle."

Suddenly Obi-Wan had difficulty breathing. "Are you certain?"

Mace shook his head. "Nothing is certain. But this raid - the capture of Palpatine had a be an inside job. And the timing...we were closing in on him, Master Kenobi! The information you and Anakin discovered

..."The trail led to the sub-basement of Five Hundred Republica."

Five Hundred Republica was the most exclusive address on the planet. Its inhabitants included only the incredibly wealthy or the incredibly powerful, from Raith Sienar [...] to Palpatine himself.

"We have to face the possibility - the probability - that what Dooku told you on Geonosis was actually true. That the Senate is under the influence - under the control - of Darth Sidious. That it has been for years."

"The only reason Palpatine's not a suspect is because he already rules the galaxy."

So, the Jedi as a group knew that:

They still didn't know if Sidious was the Master or the Apprentice.

What did the Jedi think?

They thought that Palpatine was under the control of Sidious. They acted on this by keeping information from him, and by attempting to spy on him by using Anakin's friendship with Palpatine. Tensions were high between the Council and the Chancellor, thanks to their suspicions about his inner circle, fears that he would not give up power when the Clone Wars ended, and his attempts to force Anakin onto the Jedi Council.

So yes, Yoda and the rest of the Jedi suspected that Palpatine was, at the very least, a dangerous, cynical, and power-hungry politician, and considered him at best a necessary evil. They thought him a potential threat, feared he may seek to become a dictator. Whether that reaches the level of considering him "evil" is a matter of opinion; they definitely thought he was dangerous. 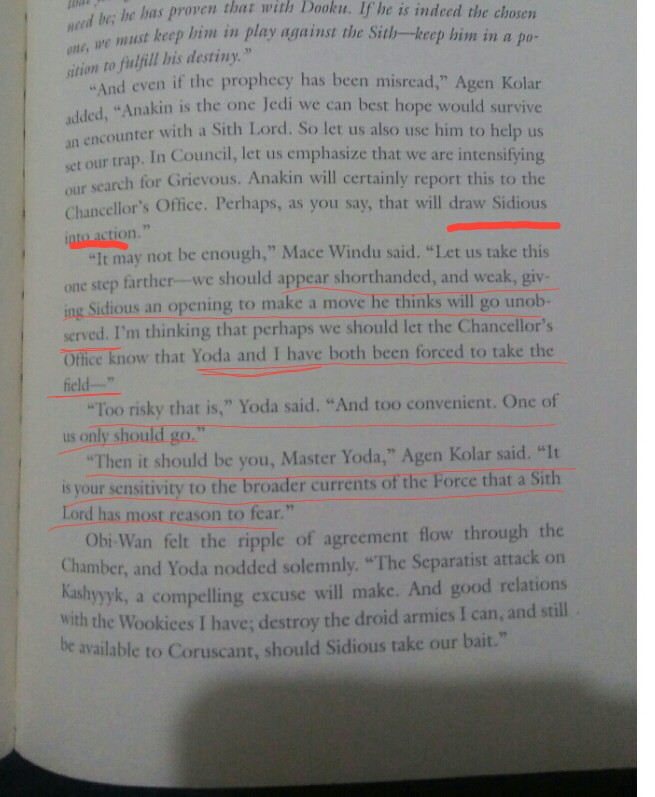 The decision to send Master Yoda away was the Council's to draw Sidious out. All the Jedi knew at this stage of the game was that Sidious was bipedal, of roughly human conformation. And that he resided in Five Hundred Republica-the most exclusive address on Coruscant. It's inhabitants included only the incredible wealthy or incredibly powerful. Mace Windu goes on to say: "The only reason Palpatine is not a suspect is because he already rules the galaxy." the Jedi suspected someone within the Chancellor's cabinet, or even a guard, that could easily influence the weak minds of those around him.

129
Did Palpatine intentionally lose to Mace Windu?
9
How did Mace Windu conclude that Darth Maul was a Sith?
28
How does Yoda know that the name of other Sith is Darth Sidious?
27
Why didn't Mace Windu consult Yoda before going after Palpatine?
18
Why wasn't Master Yoda able to beat Palpatine?
8
Did Yoda suspect Palpatine before the Clone Wars?
15
What was Palpatine watching before he revealed himself to Anakin?
11
Why did Yoda and Palpatine talk about Anakin?
6
How did Palpatine learn Yoda was on Moraband?