Did Edith Keeler really have to *die*?

In the Star Trek TOS episode 28, "The City on the Edge of Forever", we find that McCoy's drug-fueled tear through the past caused serious and far-reaching effects on the space-time continuum; to wit, the delay of the US' entry in World War II, its loss to Nazi Germany, having developed the atomic bomb before the US, which eventually prevented the Enterprise and the Federation from ever existing. The crux, Edith Keeler, a pacifist, and Kirk's love interest of the week, didn't die due to McCoy's intervention.

But did she really have to die?

For the moment, let's put aside the dramatic effect of Kirk having to make a sacrifice and lose his true love to allow history's normal course to be restored. Let's also put aside the Vulcan logical argument that the needs of the many outweigh the needs of the few, or the one. Fine, but, Edith Keeler's death is like using an ICBM to destroy a mosquito. All that really needed to happen was to prevent her from starting her pacifist movement at that time. It could have been delayed until after World War II, or longer.

So, following that reasoning, why didn't they just take her back through the Guardian's gate to their present? The Guardian didn't seem to have any issue with people passing through the gate per se, just the adverse effects of changing the timeline. Had Edith disappeared at the moment of her death, she would have been removed from the timeline as in the original course, but she would have been able to do good humanitarian work in 23rd century instead of the 20th. In Star Trek IV: The Voyage Home, someone from the Enterprise's past is brought forward in time with them, and for good reason. No sacrifice, no death, no terrible ripple effects. And, Edith still makes a sacrifice: she must give up her cause at that place and time to stay alive. Live today, so you can fight tomorrow.

So, if we put aside the dramatic effect, the logic of "sacrifice for the greater good", why couldn't Edith Keeler have been removed from the timeline without killing her?

In the following remember that the entire Federation had disappeared, these people were in a very serious quandary, Captain Kirk even instructed them to wait and each try to correct the time stream in turn.

Just because I want to see it! 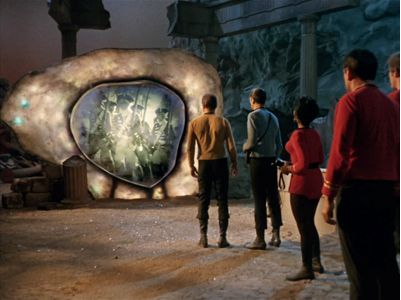 SPOCK: I was recording images at the time McCoy left. A rather barbaric period in your American history. I believe I can approximate just when to jump. Perhaps within a month of the correct time. A week, if we're fortunate.

KIRK: Make sure we arrive before McCoy got there. It's vital we stop him before he does whatever it was that changed all history. Guardian, if we are successful

GUARDIAN: Then you will be returned. It will be as though none of you had gone.

So they couldn't take her back with them because the GoF said they'd be returned only if they succeeded in stopping McCoy...which meant stopping him from saving her life.

I think there are three reasons why Edith Keeler had to die. One is the purely practical "real world" script writer's reason. It was suggested that Kirk, et al take Edith back through the Guardian of Forever. If she did go, Kirk, as a character, loving Edith as much as he did, would probably give up command and settle down with her, so the producers would have to find another Captain. Edith wasn't really a 'girl of the week' type character (like say, Shana on Triskelion).

The second possible reason is that as we now understand time, events probably cannot be altered in reality, were time travel actually possible. What Spock saw with his 'stone knives and bear skins' computer (Nazis winning, etc) was a temporary glitch in the time line. The time line got restored because that's how time works. Edith had to die, because that's what originally happened.

The third possible reason would be that if the time line can actually be altered by time travellers, and if she were not killed - if Kirk tried to take her back to the 23rd century- then, as someone mentioned, she would be considered disappeared and it might set off a completely different (and perhaps worse) outcome, since death comes with different consequences than a disappearence. So, this explains Kirk's anguish as he realized that the only way to set things right was to have Edith die.

Unless the WWII of the Star Trek reality was substantially from our own Edith Keeler did not have to die.

"From the start of the war until the late fall of 1941, the German 'lightning war' had marched from one victory to another, subjugating most of Europe. During this period, the Germans needed no wonder weapons. After the Soviet counterattack, Pearl Harbor, and the German declaration of war against the United States, the war had become one of attrition. For the first time, German Army Ordnance asked its scientists when it could expect nuclear weapons." (NOVA: Nazis and the bomb)

Because Germany only started looking at atom bombs in 1942 they were three years behind the US program which had started in 1939 and they never caught up--they only got to an early part the 1942 stage of Manhattan project in 1945. From what we can put together the best Germany could have produced in 1946 was a conventionally powered "dirty bomb" : "At best this would have been far less destructive than the atomic bombs dropped on Japan. Rather it is an example of scientists trying to make any sort of weapon they could in order to help stave off defeat." (NOVA; Nazis and the Bomb)

Another problem is the V2. In OTL when Hitler was first shown the plans for the V2 in late 1941 he was dismissive of the V2 as essentially an artillery shell with a longer range and much higher cost (Irons, Roy. Hitler's terror weapons: The price of vengeance. p. 181.) It was not until 1944 with German moral waning in the face of defeat after defeat that Hitler decided on building the V2.

In anything resembling OTL it is a catch-22 situation: a more successful Nazi Germany thanks to less US involvement would mean delaying both the German A-bomb (not really viable until 1948 under the best of conditions) and the V2 to carry it. So delaying US involvement in WWII essentially delays the very weapons that supposedly let Germany win the war!

Also the V2 simply didn't have the ability to carry an A-bomb...that is why Stalin put so many resources into duplicating the Superfortress instead of simply copying the V2 and slapping an a-bomb on top of it.

IMHO, the only thing that makes any sense assuming the Edith Keller dies TTL is anything like OTL is in the she lives timeline Edith Keller tries to meet with Hitler ala Neville Chamberlain and this allows Hitler to be killed putting a more competent megalomaniac in power. This new leader of Nazi Germany is far more visionary then Hitler and puts far more resources into the A-bomb and V2 projects having them completed much earlier then in OTL. November 8, 1939 IMHO seems most likely date for this being one of the closest assassination attempts on Hitler.

Extend the speech (perhaps to placate Edith Keeler who might be in the audience) and bye bye Hitler.

Remember that Edith Keeler is the key to all this so we can't be going all ASB to make things fit; so more on track German A-bomb and V2 programs must somehow relate back to her rather then simply the results of her actions.

By itself a less involved US means a more successful Germany which means less investment in the A-bomb and V2 programs not more delaying them even further than in OTL. Even with both the US and USSR in the war the German A-bomb program was only at 1942 stage of OTL's better funded Manhattan Project in 1945 and it was planned to stave off defeat.

SPOCK: She was right, but at the wrong time. With the A-bomb, and with their V2 rockets to carry them, Germany captured the world.

tl;dr - possibly not, but it's the only way to be sure.

In the original timeline, she dies after being hit by a car, and has relatively little effect on time.

In the second timeline, after McCoy returns, she is not hit by a car, and her pacifist ideals gain popularity, resulting in America not entering the war. Now, as others have said, for the US to not enter the war after Pearl Harbor is a hard thing to believe, but in this new timeline, with her voice already being a major influence of calm and peace, there's a chance that Japan might have decided the attack wasn't necessary. But that's sheer guesswork.

In the third timeline, after Kirk and Spock go back, McCoy is stopped from saving Edith, she dies in the accident, and the future is restored. Considering that in that version of the incident, she crosses the street because she sees Kirk and McCoy, and walks to join them, they have still technically changed time, in that the reason for the accident has changed. Or, if you want to apply a bootstrap paradox to the proceedings, they cause the accident all along.

The question is, considering how good Kirk is at convincing people of things, could he have given a speech to Edith that got her to realize that, say, sometimes violence is required against a force so horrific that they won't listen to anything else? She could have lived on her life helping people in a small missions a few stores down from Floyd's Barber Shop, and never rose to national prominence.

The effective word there is "could".

There's too many variables and permutations in a situation like that, and they'd never have the opportunity to tweak things if she changed her mind again about speaking up. So to guarantee the preservation of the timeline, she needed to expire as she originally did.

One of the replies above may address this, but.... It almost seems she was destined to die, no matter what happened. At one point she stumbles at the top of a flight of stairs, only to have Kirk catch her before she falls. She may have died had she fallen then. Its possible that even if she were taken into the future, something would have happened to kill her anyway, if it was actually destined that she should die (reminds me a little of the plot of the game "Life is Strange", that has a similar plot point revolving around the seeming inevitable death of a person, and how preventing that could result in disastrous consequences).

Not the answer you're looking for? Browse other questions tagged star-trek time-travel star-trek-tos paradox alternate-history or ask your own question.

7
Title of a sci-fi book with time-travel and sentient dinosaurs
11
After the DS9 finale what happens to the Jem'hadar and what assurances do the Federation have that the Dominion won't attack again?
14
What is Guinan?
21
Which Clark Gable movie did Edith Keeler want to see with Captain Kirk?
4
Stargate: Continuum, time travel, people vanish from timeline at different moments
15
Does Lwaxana know that Picard is avoiding her?
10
How did the Enterprise crew learn of Guinan's ability to perceive nonlinear time?
5
Why is Michael Burnham’s prison uniform - not uniform?