What are the rations Rey eats?

In The Force Awakens, we see Rey pouring some flour-like polystarch rations into water so that the flour amazingly transforms into something that looks like bread. What are these rations? Is there any documentation of the fictional chemistry and biology that makes the starch rations behave as they do? 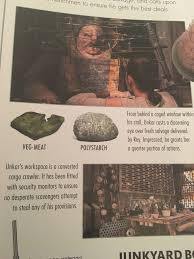 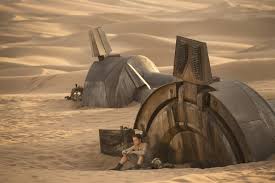 There's a pretty reasonable description of how they work in the film's two novelisations (Official / Junior);

Green slab-stuff sizzled in a makeshift cook pan. Opening the packet of beige powder, she dumped it into a tin half full of water. A brief stir activated the mixture, which promptly expanded and solidified into a loaf of something like bread. She slid the cooked meat off its pan and onto a plate, then slipped the loaf out of its container. Taking a seat, she dug into both as if she had not eaten in weeks. It seemed that these days all too many meals were like that.

Rey made dinner in her humble home. She opened both ration packets and dumped the green protein square into a pan on a burner. While that was cooking, she mixed the brownish flour with water in a container. The chemical reaction worked its magic and a doughy loaf rose.

“Meat and bread” was what Plutt called this packet combination, though Rey doubted it tasted anything like the real thing. She ate from a plate that she licked clean of any leftover food.

Which matches the description in the film's script

She cooks for one. Does everything for one. She opens the POWDER, moves to the makeshift WOK, where the GREEN MEAT SIZZLES. Pours the powder into milky WATER in a tin. Stirs it. It GROWS INTO A LOAF as she puts the meat on an old plate. Grabs the loaf.

So it's an...erm...chemical reaction. And then you get bread. Ta-da!

As to how the effect was accomplished practically, it may interest you that it wasn't actually CGI.

Chris [Corbould - SFX Supervisor]: We had a little bowl of liquid. At the bottom of that bowl you had a bread molded inflatable bladder. And as we inflated that, we sucked all the liquid out. So that as that was coming up, the liquid was disappearing by using a vacuum dump. A very simple procedure, but quite effective.

Who says it's fictional chemistry and biology?

According to this page by the food experts at http://www.realfoodrealkitchens.com (emphasis mine):

there was one scene where she puts a few drops of water in to a tray and bread instantly rises. Is this possible? Well from what I could find yes and no. With the heavy military context of the entire underlying story of the Star Wars franchise, it would only make sense that 'regular' people might eat military styled ration packs. And in military styled rations there does exist a simple bread called Hardtack that is made from just water, flour, and sometimes salt. Is this what 'Rey' was eating? The more modern version of Hardtack is something I eat all the time with cheese, it's called a 'water biscuit', think of the British crackers made by Carr's.

They even include a recipe for water crackers further down on the same page!

A recent news article has confirmed that the chemistry used to make Rey's bread was definitely real, not CGI as many believed. Quoting from the article (emphasis mine):

“Surprisingly that was done practically, although so many people have said to me, ’we thought that was a digital effect!'” [special effects supervisor Chris] Corbould said.

The idea for the bread came from director J.J. Abrams himself, and it was actually a huge task considering that you only see it on screen for three or four seconds.

“You wouldn’t believe how long it took to actually perfect that one, that little tiny gag in the film,” Corbould said. “It started off with the mechanics of getting the bread to rise and the liquid to disappear, but then there was the ongoing problem of what color should the bread be? What consistency should it be? Should it have cracks in it? Should it not have cracks in it?”

“It took about three months,” he added. “The actual mechanics of it was fairly simple, but the actual cosmetic side took a lot longer.”

But in case you’re one of those people clamoring for a home version of Rey’s food portions, don’t get too excited — the bread might have been a real practical effect, but it also tasted terrible and probably had next to no real nutritional value.

“No, you wouldn’t want to eat it!” Corbould admitted.

In-universe, here's a picture of the description found in the (canonical) TFA Visual Dictionary: 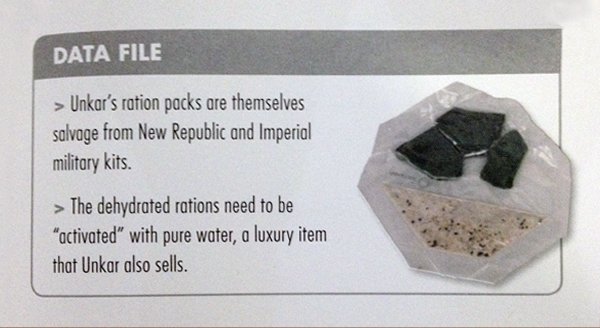 Not the answer you're looking for? Browse other questions tagged star-wars the-force-awakens food or ask your own question.

8
Is Rey's instant bread real technology?
0
Why are living conditions so primitive-looking in The Force Awakens?

30
Is the chest in Maz Kanata’s basement the same chest as the one in Obi-Wan Kenobi’s hut?
23
What happened to Captain Phasma after The Force Awakens?
3
What were the things that Unkar Plutt was dealing out to Rey and what's his beef with her?
7
How does BB-8 decelerate?
25
Is there any evidence that Rey was imagining Luke's island?
11
Who opened the door in Maz's castle?
5
Why did Rey hear both Alec Guinness and Ewan McGregor?