Who is the woman on a balcony in The Hosnian System?

In Star Wars: The Force Awakens,

when the Hosnian System is destroyed by The First Order,

there is a scene where the camera pushes in on a balcony full of well-dressed people, including a young black woman in a Resistance uniform.

Is that woman important? Who is she? Does she have a name? If she was important in the Resistance, what does she do?

Here's a picture of Korr Sella from The Visual Dictionary, and you can see it's the same woman, (played by Maisie Richardson-Sellers): 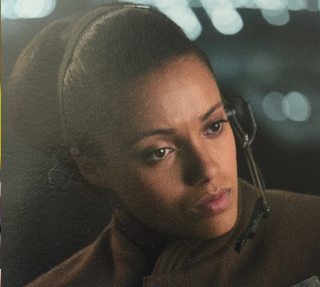 Here's the scene where Leia sends her to the Senate, from the official novelisation of the film:

As usual, Leia did not waste time on small talk: “You need to go to the Senate right away. Tell them I insist that they take action against the First Order. The longer they bicker and delay, the stronger the Order becomes.” She leaned toward the other woman. “If they fail to take action soon, the Order will have grown so strong the Senate will be unable to do anything. It won’t matter what they think.”

Sella indicated her understanding. “With all respect: Do you think the senators will listen?”

“I don’t know.” Leia bit down on her lower lip. “So much time has passed. There was a time when they were at least willing to listen. And of course, the Senate’s makeup has changed. Some of those who were always willing to pay attention to me have retired. Some of those who have replaced them have their own agendas.” She smiled ruefully. “Not all senators think I’m crazy. Or maybe they do. I don’t care what they think about me as long as they take action.”

The emissary nodded. “I’ll do all I can to ensure the Resistance gets the hearing we deserve. But why don’t you go yourself, General? An appeal of this nature is always more effective when delivered firsthand.”

Leia’s smile thinned. “I might make it to the Senate, yes. I might even be able to deliver my speech. But I would never, never get out of the Hosnian system alive. I would have a terrible ‘accident,’ or become the victim of some ‘deranged’ radical. Or I would eat something that didn’t agree with me. Or encounter someone who didn’t agree with me.” She composed herself. “I have total confidence in you, Sella. I know you will deliver our message to the full extent of your considerable abilities.”

Apparently this scene was also planned to be included in the film, and was filmed but then deleted before release.

And here's the novelisation's version of the balcony scene you mentioned in your question (big thanks to @DVK for supplying the quote):

Traveling faster than anything ever generated by artificial means, through a torn portion of space-time whose properties were not fully understood, the concentrated glowing ball of energy lit the night sky above Republic City. Leia’s envoy Korr Sella was among those who gazed uncomprehendingly at the inexplicable phenomenon. Disturbed space was energized and lit up by its passage. It was as if a minuscule sun had suddenly appeared from nowhere, heading directly for the world on which she stood.

Interestingly it was known as long ago as March 2015 that Richardson-Sellers would be playing a character named Korr Sella, when this image was released:

9
What does Kylo say in the English version (and in the other translations) of “Star Wars: The Force Awakens”?
5
How big is the Star Wars Resistance's fleet?
22
How did the First Order build Starkiller base so quickly?
61
How are Stormtroopers uniquely identified in the field?
5
Was Rey's memory wiped?
2
Who owned the starship that abandoned Rey on Jakku in her vision?
11
What is the technical name of the conical totem lanterns scattered in the Tuanul village field?