What is an “elk” beyond the Wall?

In A Song of Ice and Fire we are told that Coldhands rides a large elk with a great rack of antlers. Well, the word elk has different meanings in the UK and the US. Which is it?

UK meaning of "elk" Alces malchis, called "moose" in the US and Canada: 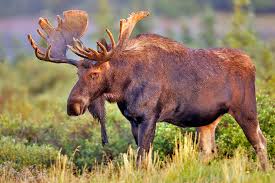 US meaning of "elk" Cervus canadensis, perhaps called "wapati" in the UK: 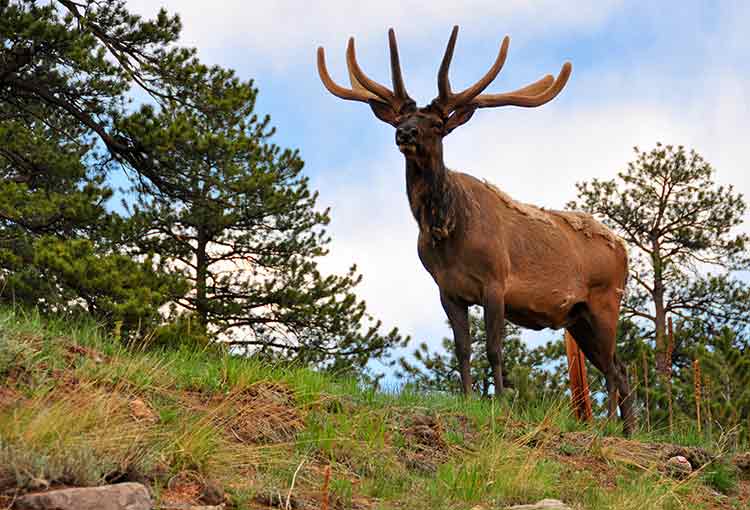 Could it be that GRRM, being American, intends us to visualize the thin antlered, Cervus Canadensis (US ELK), or the thick antlered, alces malchis (US moose, UK ELK)?

It appears to be left unclear as to what type of antlers the elk have in the books. Although from the text it can be inferred that the antlers are more similar to that of the US elk.

From a nearby oak a raven quorked, and Bran heard the sound of wings as another of the big black birds flapped down to land beside it. By day only half a dozen ravens stayed with them, flitting from tree to tree or riding on the antlers of the elk. The rest of the murder flew ahead or lingered behind. But when the sun sank low they would return, descending from the sky on night-black wings until every branch of every tree was thick with them for yards around. Some would fly to the ranger and mutter at him, and it seemed to Bran that he understood their quorks and squawks. They are his eyes and ears. They scout for him, and whisper to him of dangers ahead and behind.

A Dance with Dragons, Bran I

Obviously it is possible to ride on the antlers of both of the types of elk but it is easier to ride on the thinner ones. That quote doesn't really point in either direction but:

In the very shadow of the Wall the wildlings made ready, winding thick coils of hempen rope around one shoulder and down across their chests, and lacing on queer boots of supple doeskin. The boots had spikes jutting from the toes; iron, for Jarl and two others, bronze for some, but most often jagged bone. Small stone-headed hammers hung from one hip, a leathern bag of stakes from the other. Their ice axes were antlers with sharpened tines, bound to wooden hafts with strips of hide. The eleven climbers sorted themselves into three teams of four; Jarl himself made the twelfth man. "Mance promises swords for every man of the first team to reach the top," he told them, his breath misting in the cold air. "Southron swords of castle-forged steel. And your name in the song he'll make of this, that too. What more could a free man ask? Up, and the Others take the hindmost!"

A Storm of Swords, Jon IV

The axe blades would be easier to make from the UK elk though these are ice axes so it would be just as easy to make them from the US elk. Again it is unclear.

However, the 2017 ASOIAF calendar points to the elk being like the UK version although the antlers are more of a mix between the two: 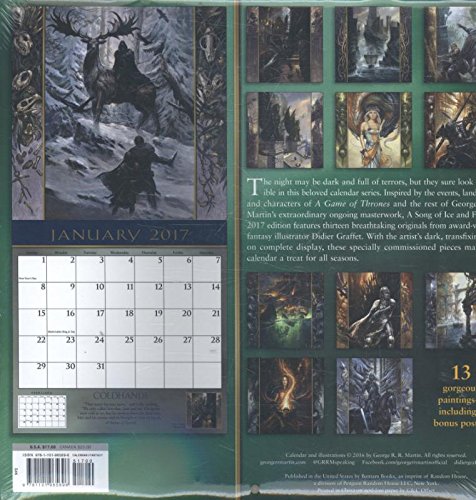 Note that the elk in the calendar above looks more like the extinct Irish elk: 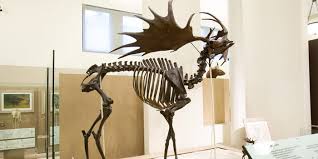 Wapati, but not all through the year

Among hunters, the Alces malchis is known as slow and sedentary compared to other game such as red deer (Cervus elapus) and in popular culture depicted as somewhat "slow". It does not fit well as a stately animal to ride on.

"Deer" refers to the Cervidae family which includes the nimble red deer, reindeer, (that you can indeed ride), and also the wapati Cervus canadensis. The wapati, being one of the largest Cervidae, makes a far better candidate as a fictional riding animal.

Note that all species under consideration shed their antlers each year. if Coldhands "rides an animal with large antlers", he can not be doing so at all times

62
Why did Tyrion visit the Wall?
34
How is The Wall bypassed?
19
Archery on the Wall [Spoilers]
44
Can the Wall be melted?
17
Why did Mance Rayder go beyond the Wall if he knew about the threat from the Others?
16
How well does the Wall work?
23
What exists beyond Westeros, North of the Wall and the Free Cities?
4
Why we have no (or close to none) children of the forest in the north but beyond the wall
15
Why didn't King Robert visit The Wall?
9
Is the origin of the words 'valar' and 'Valyrian' the same?