Why does Darth Vader raise his prosthetic arm when channeling the Force?

Many Force users channel their powers (pull, push, lightning) through their hands. But in the case of Darth Vader, this does not seem to make sense. Because there is nothing there. His limbs are prosthetic and contains no midichlorians. Could there be a reason other than writer oversight?

Triggered by: Why does Darth Vader need to use a targeting grid?

I know of no canon answer, but I would guess that it has more to do with mental focus; for example, when force choking someone, he's basically using Telekinesis crush the target's throat. For the purposes of focusing it, it's probably easiest to visualize a hand doing the task. Then, as it crushes, it's not simply compressing, but rather simulating the action of fingers bending inward; using his own hand, both being controlled (albeit by servo-moters) and visible in front of him helps him properly visualize what he's doing.

The same idea applies to shoving motions when doing a Force Push, and grasping motions to summon a light saber; in each case, what he is doing with the force is a mimicry of what his body is doing. Given that, even via prosthetic, the ability to do the tasks physically is something long since learned, I think he's doing it physically and using the force to extend the reach via what amounts to simply a remote, invisible, force based hand.

Could he do it with no gesture? Sure; but using a physical gesture as a template removes the need for extra thought to makes sure he's doing it properly. (If he's going to choke someone by imagining a loop around their neck and tightening it, he has to consider where the cord comes together, is it simply constricting, or being pulled tight, etc. But imagining his hand doing it requires no thought.. he's done it physically many times.)

Another aspect may be the intentional limitation of force use. Much like the question Why does Q click his fingers, I think Jedi develop personal gestures or use mimicry to focus their powers to limit themselves; without some 'trigger' for the powers, what accidents could be caused by stray thoughts, for a strong force user? (A passing women inspires a dirty thought? The passing lady gets goosed. Feel a sudden urge to shove someone out the window? It happens.) A minor version of an action to be performed on a larger scale WOULD tend to give your actions away slightly, but would make it much harder to accidentally perform a force based action.

It should be noted that Vader does not NEED to make any specific gesture when force-choking anyone. In Episode V he takes out Ozzel while he is just sitting quite motionless in his meditation chamber, watching his victim on a screen.

So the gesture, where it occurs, is likely simply habitual -- an aid to visualising a Force hand crushing the throat of another. The gesture is not necessary or vital, and it makes no difference that Vader's hand is actually a prosthetic. It is not the hand that is producing the effect, it is Vader's mind.

This answer is largely inspired by this question:

which is marked as duplicate.

The hand-waving or choking motion is definitely not necessary.

In The Empire Strikes Back there are two relevant scenes: 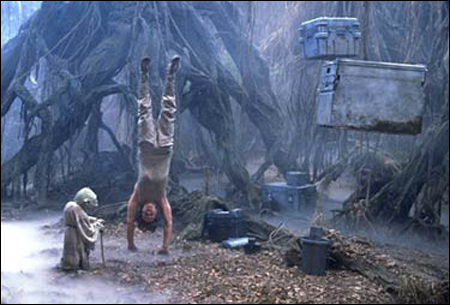 Here we have Luke Skywalker, doing a handstand, with both hands occupied and yet he still can use the Force to levitate crates.

Second, during the duel between Skywalker and Darth Vader in the Cloud City on Bespin, Vader flings large pieces of equipment at Skywalker while both hands are occupied. This is how the glass gets broken and Luke needs to hold on to avoid being sucked out.

Thirdly, in Return of the Jedi, we have Luke levitating C3PO after the Ewoks have bound his hands to the spit:

So, to answer this OP: It's not needed to channel the Force. So it must be for effect. You can't inspire fear of it's not clear to all present that you are the source of the injury.

Apart from the possibility that using the Force could be a completely mental ability, thus requiring gestures only for increased focus, there are some indications that the glove used on that hand was of Sith decent. I would not dare to presume about the powers imbued into the wearer by such an artifact...

Follow up answer. It would not be a great series of movies if the Force users just held tight while battling each other. haha. "Seeing Dark Vader crushes his opponents while just looking at them seems more bad proper than the rule of midichlorians.

Another possible answer is that the gesture is a side effect of the suit's cybernetic system. It's clearly controlled by his brain functions, which let him walk and fight. He did most of his force training before he became confined to the suit, so he may not be consciously choosing to move his limbs - it may be that the mental signals to perform the gestures are linked to his focus while using the force, and the suit is just executing those commands.

If I recall correctly, in Rogue One when Vader raised his fist, he began force choking one of the rebel soldiers, I read in Book of Sith that the force choke requires a free hand to form the control fist. As far as I can remember

1
Why are hand gestures used in executing Force powers?
25
Why does Q click his fingers?
30
Why does Darth Vader need to use a targeting grid on his Tie Advanced in ANH?
12
Is Force lightning from the feet plausible?

25
How did the Emperor punish Darth Vader?
29
Why did Palpatine save Vader?
5
Does one's ability to use the Force depend on distance?
10
Aside from the Force, is there magic in Star Wars?
20
If Darth Vader discovered Luke was his son from the Emperor in the 2004 retconned version of “The Empire Strikes Back”, then how did the Emperor know?
27
Why didn't Vader Force Pull the Death Star plans into his hand on the Rebel flagship?
4
Did Vader know Luke was continuing to talk to Obi-Wan after he was killed?
2
Can all Jedi/Sith learn the same Force powers?
11
What are the implications of being “cut off from the Force”?