When do we see Gungans in The Force Awakens? 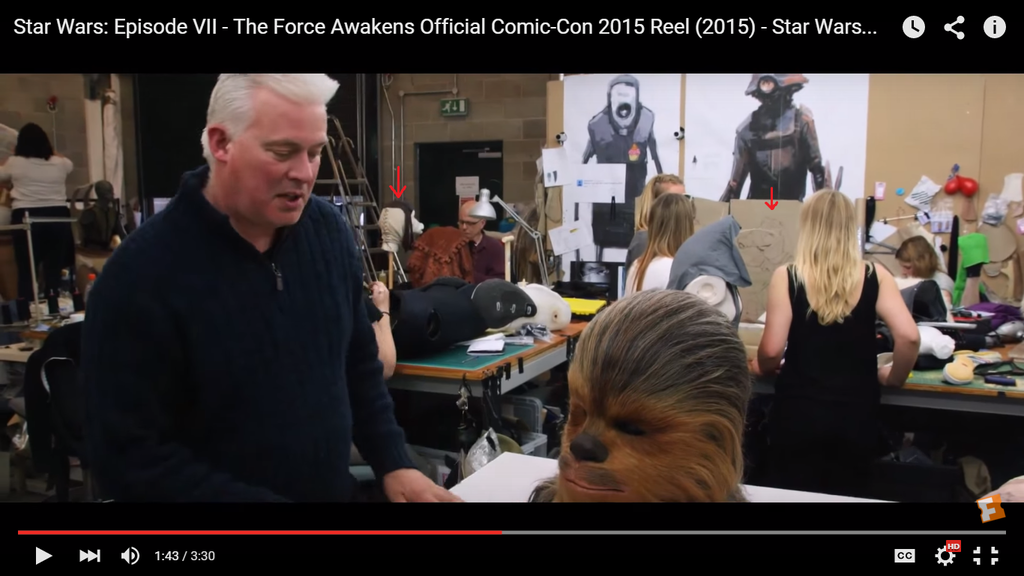 In this screenshot from The Force Awakens Comic-Con behind the scenes video, the red arrows point to what look like models/drawings of gungans, implying that there would be gungans appearing in the film. 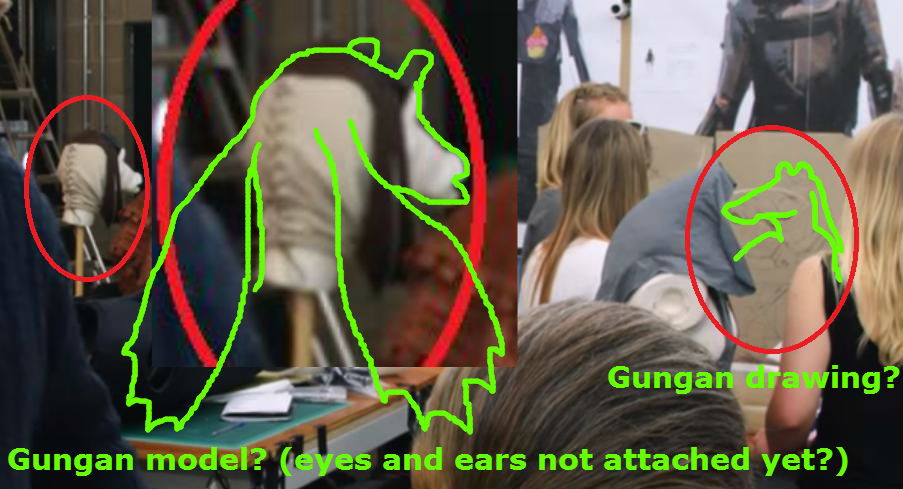 However I don't remember seeing any. Were there any gungans in the film?

Note: I'm asking about any gungan, not just ... that gungan.

Per the Creating Creatures featurette on the Blu-ray, we find out that these aliens were dubbed "snooty pirates" and definitely not Gungans. Here's a pic I took since I can't screencap it. 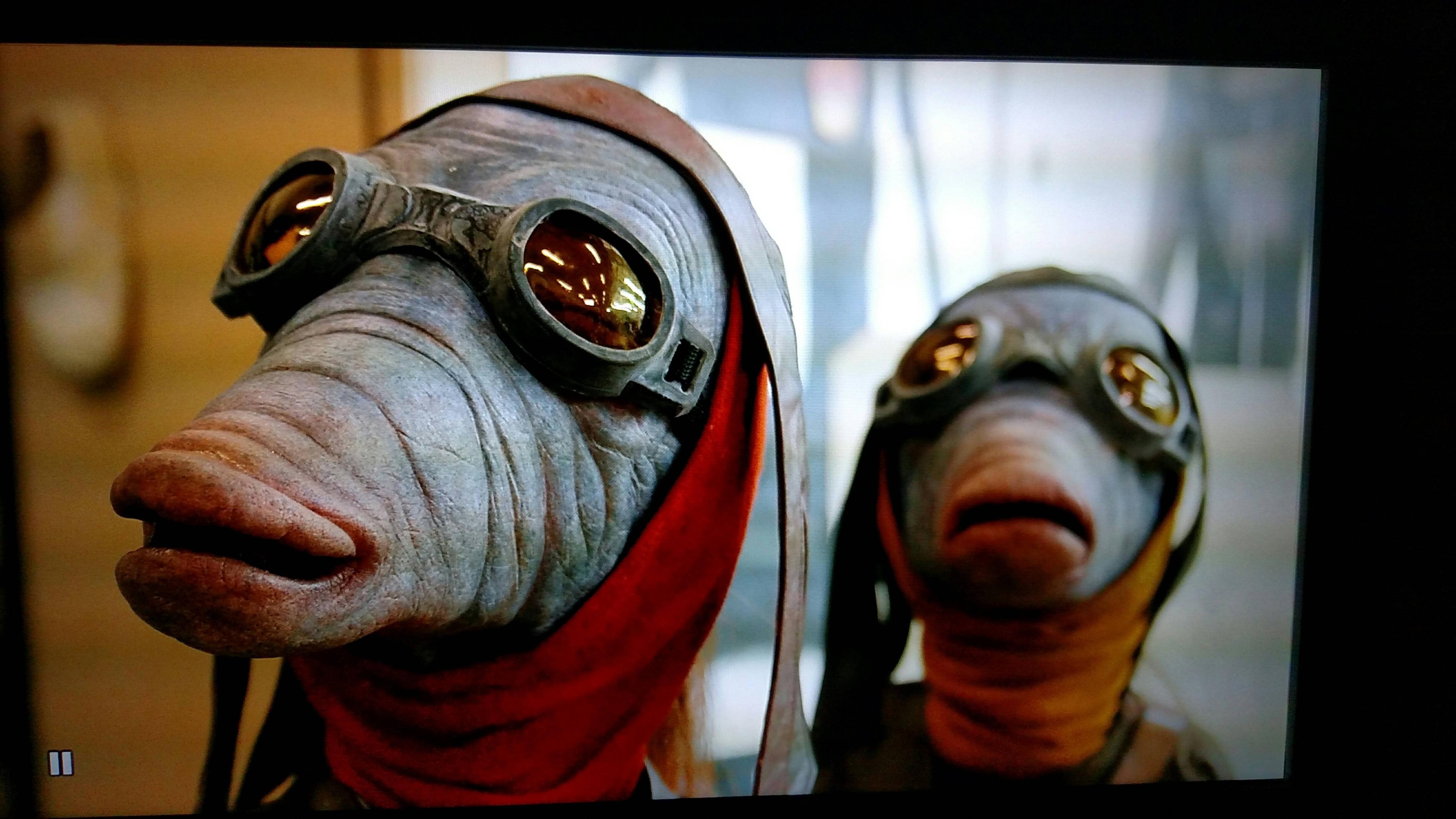 I would say that not only were Gungans not seen in The Force Awakens, but they should not have been expected to.

Based on (1) lack of evidence to the contrary, (2) my personal viewing of the film, and (3) my counter-points to the images in question. 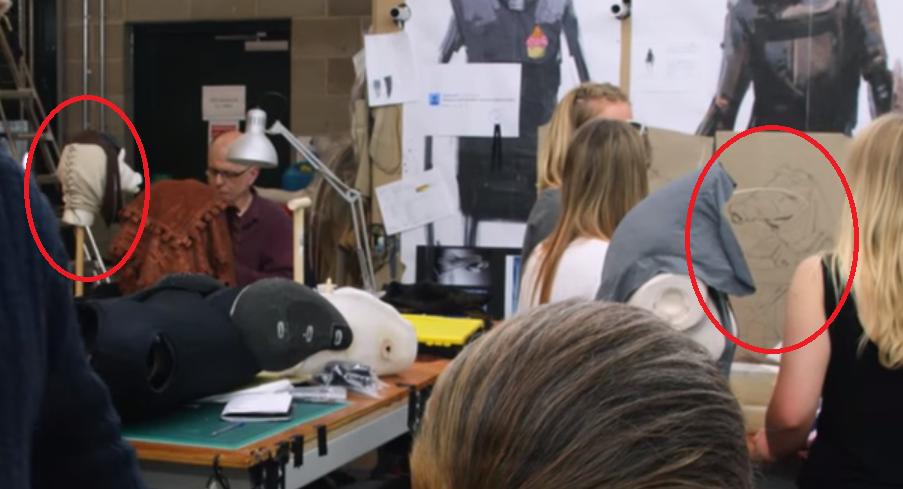 After looking at the updated question, with outlines, I see that I was looking at the negative space in a completely different way that the OP. So, I drew these overlays to help me see it their way. 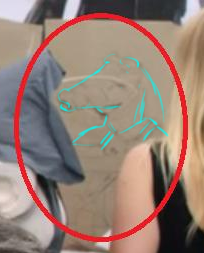 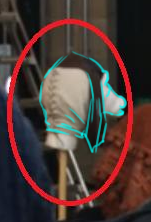 After doing this, I would hazard that the sketch on the right is meant to be the same species or character as the prop on the left.

I can't guess which other character in TFA this was. There were a few scenes with many alien species, such as on Jakku or at Maz's place, and images of them all aren't available to me, yet. I can provide a comparison of the character designs to Gungan designs. 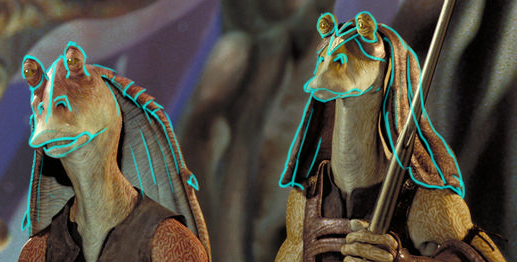 As you can see above, snouted Gungans like Jar Jar have:

Then there's the ears. Jar Jar's type of Gungan seems to sport different ones than his escort, so I'll account for both types:

The prop on the left currently has no ears long or large enough to be construed as Gungan ears, and the existing cap would likely interfere with attaching such ears to the model, unless it's easily removable. To me, they look like ears or a cloak for a different species, but I'm going to write this model off as too unclear.

The drawing on the right has what looks like large ears, but they fail to be Gungan because:

One or two points of difference in a design comparison might not be enough to rule out Gungan design, given that there are several types of Gungans themselves. However, the difference between these behind-the-scenes designs and known Gungan designs are significant enough to rule them out as Gungans, unless we were going to be introduced to yet another variety. I think a new variety would be unlike, and, ahem, alienate the fan base.

The one on the right originally looked a bit like Boss Nass to me: 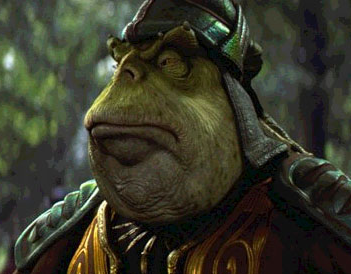 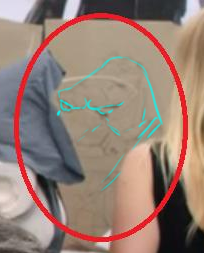 So, I thought that's what the OP was referring to. I personally thought it looked much more like the big gentlemen we see in Maz Kanata's place, as pictured in the center of this image: 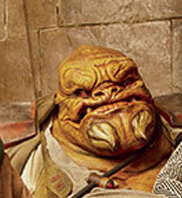 If you look closely at the sketch, you can even see a thin cord coming from the top right (character's left) across his chest, which the tusked alien also has.

I no longer think the drawing is meant to be a fat-headed aliens, but wanted to preserve this part in case someone else saw the sketch without paintovers and saw the same thing as I did.

We don't, but J.J. thought about killing off Jar Jar in The Force Awakens.

I have seen The Force Awakens twice and did not spot any Gungans. Also, the Alan Dean Foster novelization does not include "Gungan" or "Jar Jar" or "Binks" anywhere in the text. It was also confirmed about 10 days before theatrical release that Jar Jar wouldn't be in the film.

It is worth noting, however, that as recently as May 2015 (only 7 months prior to the film's release), Director J.J. Abrams had considered killing off Jar Jar in the film, as a fan service:

It is possible that the prosthetic in the screenshot was constructed in preparation for such a scene. According to the linked article, J.J. mainly considered having a shot of Jar Jar's bones lying in the desert; still, he could have been considering other methods of killing him off (e.g. having him on the balcony at Hosnian Prime).

Not the answer you're looking for? Browse other questions tagged star-wars the-force-awakens behind-the-scenes or ask your own question.

31
What is the significance of the reversed colours of imperial and rebellion lasers compared to lightsabers?
12
Can Force Lightning be projected from a distant source (e.g. the sky)?
18
Which predictions of the Force Awakens: Darths & Droids Bingo were correct?
6
Which scenes from The Force Awakens trailers didn't make it into the film?
21
Did The Force Awakens use any screen wipes to transition from scene to scene?
8
What did Kylo Ren use to ‘drive’ his Force activity?
5
Did Mace Windu use the Force to command the reek to attack Jango Fett?
15
Has Poe Dameron's X-Wing been majorly upgraded between The Force Awakens and The Last Jedi?