Can someone find an episode of a show that ends on a battlefield after a planetary battle?

I am looking for a sci-fi show where soldiers are staging on a space station preparing for an assault on a planet. With all the soldiers on the space station, tempers flare and there is a brawl. A high ranking official has a female soldier love interest. The episode ends with the female soldier laying on the battlefield dead next to another dead soldier that looks like Charles S. Dutton, who is still clutching a trench knife.

This is the episode "GROPOS" from the second season of Babylon 5.

There is a large military contingent on the Babylon 5 station preparing for a ground assault, with tempers flaring between the station's personnel and the soldiers, just as you describe. 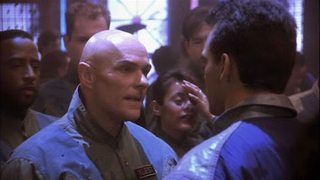 Michael Garibaldi, the head of security on the station, falls in love with one of the soldiers (Elizabeth Durman aka "Dodger", played by Marie Marshall): 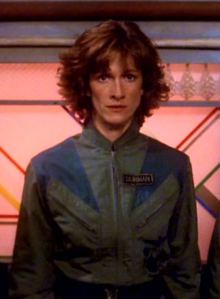 Also in the episode is Private Turnbow (aka "Large", played by Ken Foree): 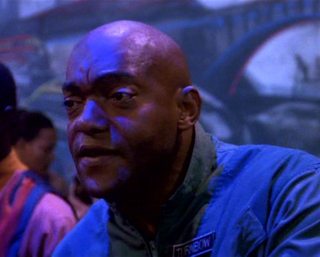 At the end of the episode, Dodger and Large are shown dead, side-by-side on the battlefield, just as you describe.

5
TV show about a man investigating murders, starts seeing a woman that only he can see
2
What was that show-- 1980s or 1990s anthology horror/sci fi episode
3
Looking for an episode of a 90's show involving a man who can time travel after having a car accident
9
Trying to find a book about a soldier that ends up fighting forever
10
Help me identify this episode of a sci-fi show that discusses simulation theory
13
Show where an episode ends with a man levitating, imprisoned in a top secret facility?