How did the First Order build Starkiller base so quickly?

In Star Wars: The Force Awakens, we see that the First Order has constructed a massive superweapon called the Starkiller, very similar to the two previous Death Stars, though much more powerful, and much, MUCH larger, as observed when the members of the Resistance are comparing it in size to the original Death Star.

In addition, the Starkiller is built into the planet it's on!!!

The first question that comes to mind is how the First Order even accomplished this amazing feat. But the real question is:

How did the First Order build Starkiller base so quickly?

Since The Force Awakens happens just about 30 years after The Return of the Jedi, when there is no hint of the Starkiller even existing, and considering that the original, much smaller Death Star took over twenty years to construct, how is this even possible?

They only had to build the super weapon part of star-killer base, all of the superstructure was already there in the form of the planet. This would have significantly reduced the time required to build it.

Secondly the knowledge of building 2 previous super weapons would have made the creation of a third quicker and easier.

We learn in Star Wars: Absolutely Everything You Need to Know, Updated and Expanded that the planet was already home to significant Empire mining operations before the First Order took over, dating back to 20BBY 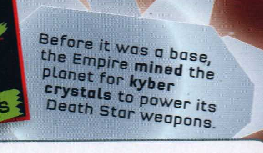 Presumably the Starkiller Base was an extension of existing facilities that were already in place (for 50+ years), rather than something started from scratch by the First Order.

7
How did they dig the big trench in Star Killer Base?