Which "certain other thespian" does Joss Whedon hate?

Wikipedia's article on the original Buffy film talks about a comic in the Buffy-verse:

In 1999, Dark Horse Comics released a graphic novel adaptation of Whedon's original script under the title The Origin. Whedon stated: "The Origin comic, though I have issues with it, CAN pretty much be accepted as canonical. They did a cool job of combining the movie script with the series, that was nice, and using the series Merrick and not a certain OTHER thespian who shall remain hated."

Who is this person that Joss Whedon hates? Why does he hate them?

Donald Sutherland played the part of Merrick in the original Buffy the Vampire Slayer Movie. 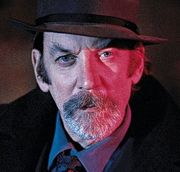 He and Whedon had ... ahem... artistic differences

JW: I had major involvement. I was there almost all the way through shooting. I pretty much eventually threw up my hands because I could not be around Donald Sutherland any longer. It didn't turn out to be the movie that I had written. They never do, but that was my first lesson in that. Not that the movie is without merit, but I just watched a lot of stupid wannabe-star behavior and a director with a different vision than mine—which was her right, it was her movie—but it was still frustrating. Eventually, I was like, "I need to be away from here."

O: Was it a personality conflict between you and Sutherland, or was he just not what you'd envisioned in that role?

JW: No, no, he was just a prick. The thing is, people always make fun of Rutger Hauer [for his Buffy role]. Even though he was big and silly and looked kind of goofy in the movie, I have to give him credit, because he was there. He was into it. Whereas Donald was just... He would rewrite all his dialogue, and the director would let him. He can't write—he's not a writer—so the dialogue would not make sense. And he had a very bad attitude. He was incredibly rude to the director, he was rude to everyone around him, he was just a real pain. And to see him destroying my stuff... Some people didn't notice. Some people liked him in the movie. Because he's Donald Sutherland. He's a great actor. He can read the phone book, and I'm interested. But the thing is, he acts well enough that you didn't notice, with his little rewrites, and his little ideas about what his character should do, that he was actually destroying the movie more than Rutger was. So I got out of there. I had to run away.

Not the answer you're looking for? Browse other questions tagged buffy-the-vampire-slayer behind-the-scenes joss-whedon or ask your own question.

9
Has Joss Whedon Commented on the Added Storyarc With Spike And How Carefully It Was Planned?
4
Has a treatment/series bible for any Joss Whedon television show been published?
4
Did Joss Whedon contribute to the script for Captain America: Civil War?