I read that Kylo Ren's trademark crossguard lightsaber was destroyed during his encounter with Rey. I don't know if him nearly having his hand cut off created this belief in somebody's mind but I simply don't recall seeing that.

Did I miss it, or have I just been misinformed?

All we know is that Rey hit the hilt of his lightsaber (with the blade of her saber), that it turned off and then came out of Kylo Ren's hand. That it was definitely broken is not mentioned in the script.

Ren gets up again but she HITS HIS SABER'S HILT -- HIS BLADE GOES FLYING OFF, TUMBLING INTO THE SNOW -- and she SLASHES AGAIN AND AGAIN AND HITS KYLO REN SQUARE IN THE HEAD AND CHEST. HE GOES DOWN, SUDDENLY A FEARFUL MAN, A LARGE BURN SCAR SLASHED ACROSS HIS FACE! He still reaches for his saber.

Nor in the Official Novelisation

Nor the Junior novelisation

The Official Graphic Novelisation shows it slipping from his hand undamaged. 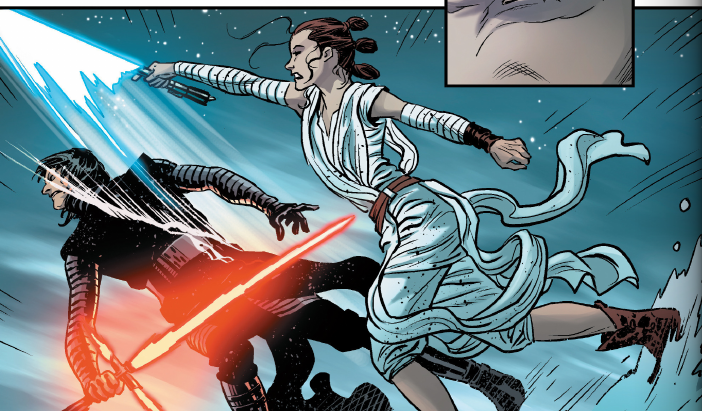 I think it was just knocked from his hand. When he sits up after Rey slashes him across the face you can see it lying in the snow and it appears to be intact.

Per The Last Jedi, his lightsaber wasn't destroyed, since he uses the same one throughout the film. This is supported by The Last Jedi: The Visual Dictionary, which shows the same lightsaber on Page 28: Kylo Ren: 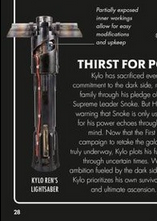 Compared to the corresponding photo from The Force Awakens: The Visual Dictionary, it's the same lightsaber:

I've just watched a frame-by-frame of the HD digital version on iTunes, and it's still unclear, but it appears as though Rey hits Kylo's blade very close to the hilt, knocking it out of his hand and deactivating it, but not destroying it.

If you have the iTunes version the critical sequence is between 1:57:33 and 1:57:37. Kylo Ren's lightsaber is at an angle, with the tip being pressed down into the snow. We see Rey's saber enter frame at 1:57:33 (frame 1), clearly in front of the hilt of Kylo Ren's saber which is nearer to his hand. There's a clear distance of perhaps a foot between the hilt itself and the point of impact: 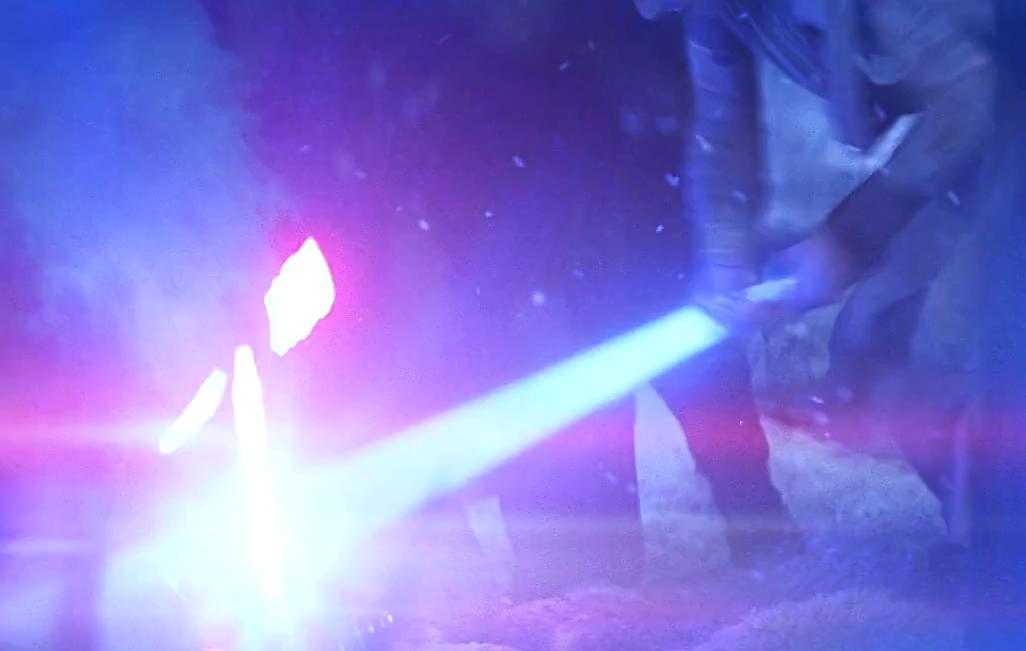 At the moment of impact (1:57:33 frame 3) we can also clearly see Kylo Ren's hand on the hilt of his saber, BEHIND the point of impact. There is a brief white flash as the sabers connect, suggesting that it's the blades that are impacting.

A moment later we see the saber deactivating, and try as I might I can't see if there are sparks or any other sort of indicator that the saber is damaged through the particle effects. Also, when Kylo Ren and Rey are seperated, we can see Kylo Ren's saber in the snow next to him - it's not 100% clear that the hilt is intact but there doesn't appear to be any physical damage to the portion that's visible above the snow: 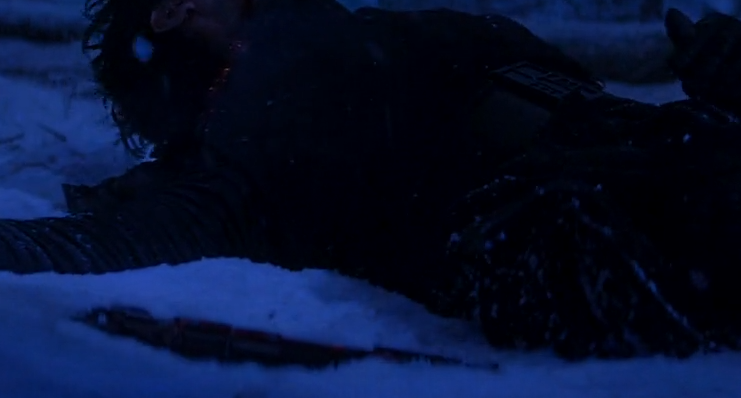 To me this suggests that in film canon it's likely that Kylo Ren's saber is still intact.

(Stills were taken from the iTunes HD version of Star Wars Episode VII: The Force Awakens, which is ™ and © Lucasfilm Ltd)

Yes, it was. Check wookieepedia

Ren defeated and injured the former stormtrooper known as Finn in the duel, but was overpowered in the ensuing duel with Rey. Rey successfully channeled the Force within herself to fight back and cleaved Ren's lightsaber in two.

Edit: This is not true. My information is outdated and hence inaccurate. My source no longer supports this data.