Why was the Invisible Hand's hangar bay pressurized?

In the opening sequence of Revenge of the Sith, Obi-Wan and Anakin launch an attack on General Grievous' flagship.

When they're attempting to enter the hangar bay, they blow up the shield generator to allow access. However, when the shield opens, the air rushes out and an emergency hatch slams shut.

Why was this hangar pressurized to begin with? I imagine one of the main benefits of using droids is that they can operate in depressurized environments, and large sections of the ship don't have to be pressurized.

Is there an in-universe explanation for why such a large space was kept pressurized in a combat situation?

According to the factbook "Star Wars: Revenge of the Sith, Incredible Cross-Sections" the Invisible Hand was built to operate with a humanoid crew, all of whom would require life support.

Although Grievous' Droid Armies have recently taken control of the vessel, it still had a crew of 600+ living and breathing Nemoidians, all of whom would require air in the event that they needed to enter the ship's hangar.

On top of that, the book makes it clear that there are only small air vents into the hangar bay. That means that if it was evacuated, it would be out-of-bounds for a considerable period of time to anyone who isn't carrying life support equipment. 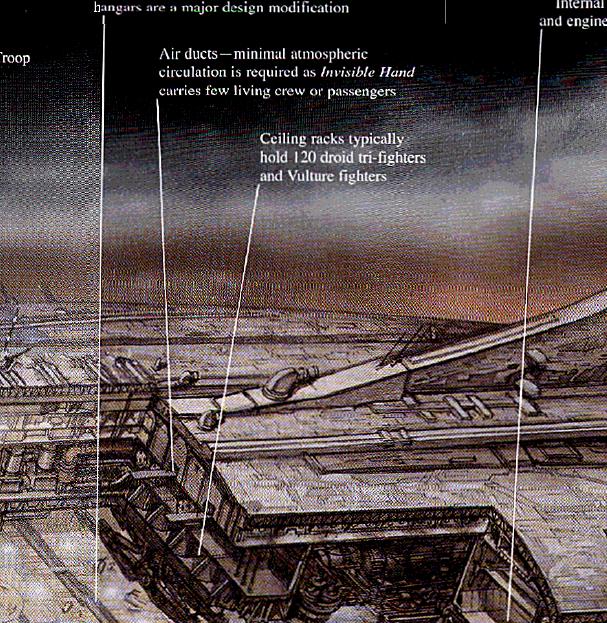 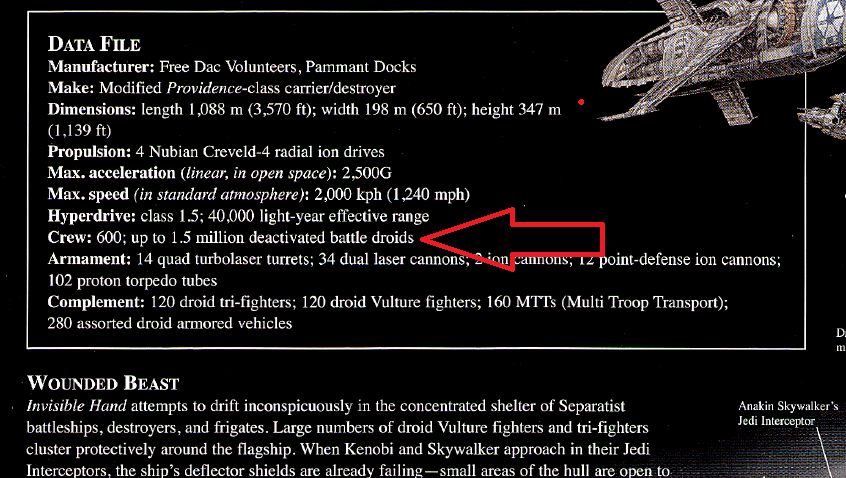 9
Why do the forces of the Republic attack Grievous' ship in RotS even though they know that Palpatine is aboard it?

2
Why didn't Dooku use Force lightning on the Invisible Hand?
6
Is there any in universe reason for the Trade Federation having their reactor run through the hangar bay?
11
Why was Anakin sent to the Temple?
12
Why were the fireships trying to put out the fires on the Invisible Hand?
9
What were the objects Rey was salvaging in the Star Destroyer hangar?
21
What is the largest-size vessel the Death Star could accommodate inside any hangar bay?
8
Why is Poe Dameron so shocked in the First Order star destroyer hangar?
4
How does General Grievous break the glass on the Invisible Hand and Anakin and Obi-Wan are not killed?
5
How does Kylo Ren escape from his attack run on the Raddus hangar bay?
8
Why was Kashyyyk a system the Republic could not afford to lose?