I read the book more than 10 years ago.

It's about a detective, set in a futuristic setting where humans have developed the ability to genetically alter their body. I remember that the book would talk of bird humans, and there was a somewhat main character that was altered to be like a gorgon (or Medusa), she flirted with the detective or something.

I remember there were a lot of murders happening, and I think it was mainly murders of the altered humans. There may have been separate groups of them, as I think a few of them was wrapped up in crime syndicates or something.

Other details I can remember is it was sold at Dollar Tree, and had a gun on the cover and I think a flower (maybe). The title was two or three words I think.

I've seen some questions similar to this one, and it is not Orphan Black.

Jonathan Lethem's "Gun With Occasional Music" (1994) is a murder mystery featuring a crime syndicate, a hard-boiled detective, and biotech-created animal-human hybrids. At least one cover image featured an actual gun: 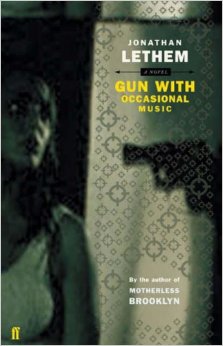 As a longer shot, the part about bird humans reminded me of a short story called "The Parrot Man" by Kathleen Ann Goonan (available here) --I'm not sure if it was ever expanded into a novel.

Some of what you mentions puts me in mind of Charles Sheffield and his Proteus series of books: Sight of Proteus, Proteus Unbound, and Proteus in the Underworld. People have Form control - the technology which allows manipulation of the human form using biofeedback techniques allied with computers. With this, you can manipulate the human form however you want. You have some that evolve into an alien species but much more intelligent. The whole process is policed to make sure certain changes and forms are not used, people die, etc.

Proteus in the Underworld has a character named Bey Wolf who, according to Wikipedia has "detective's instincts".

Not the answer you're looking for? Browse other questions tagged story-identification crime or ask your own question.

7
What book trilogy has wolf-like aliens seeking help from humans in a war?
12
Sci-fi novel with humans and alien hive enemy stranded on planet together after space battle
8
Book about 3 interstellar probes with human brains
11
A sci-fi novel about augmented mental power
17
Sci-fi short story about gamer who defeats his rival by revealing her disfigured face
8
80s-90s Book (part of a series?) About Teenager Who Fights Greek Monsters
7
Detective Story on the moon with a space yacht and an escaped prisoner