What were the objects Rey was salvaging in the Star Destroyer hangar?

In The Force Awakens, Rey is shown salvaging components from cylindrical structures in a crashed Star Destroyer's hangar. Is there any information (cue the TFA Visual Dictionary, Incredible Cross-Sections, etc.) on the function of those components and what they're called?

UPDATE: According to the Force Awakens: Visual Dictionary they were "Capacitor Bearings". Quite why a capacitor needs a bearing isn't explained. 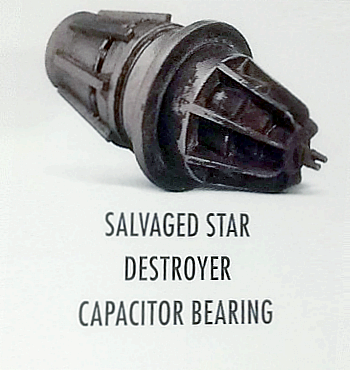 The script describes them as "various mechanisms"

A metal sheet is pulled open to reveal the wrapped up faceof A SCAVENGER, perhaps alien, in GOGGLES, FACE MASK and GLOVES. Backpack with a STAFF strapped to it. Uses TOOLS to remove various MECHANISMS from inside the wall. We are in an upside-down, canted CORRIDOR. The Scavenger finds a valuable piece, drops it in a SATCHEL.

The Junior novelisation is similarly enlightening, referring to them as "various components"

She hung on to the wall of a demolished destroyer and used her tools to wiggle free various components that rust hadn’t devoured. The ship was a treasure trove of metal sheeting and military-grade tech that, if given a proper cleaning, could fetch Rey a meal or two at Niima Outpost.

The Official Novelisation is just about as forthcoming, noting that they're "small devices"

When the satchel was full, the scavenger secured it shut and commenced a perilous descent, avoiding sharp projections and threatening gaps in the wall. Arriving at the bottom of the metallic canyon, the figure hefted a piece of larger salvage recovered earlier and then, laboring under the double load, headed toward a distant slit of sunlight.

Not the answer you're looking for? Browse other questions tagged star-wars the-force-awakens object-identification or ask your own question.

14
What were the cylindrical structures Rey was salvaging from in the Star Destroyer?

37
What was in the Star Destroyer Avenger's garbage?
52
What were all those visions Rey saw?
3
What were the things that Unkar Plutt was dealing out to Rey and what's his beef with her?
3
Why did Poe and Finn's TIE Fighter land so close to the scavenger town?
8
What did Kylo Ren use to ‘drive’ his Force activity?
12
What was the initial escape ship of Rey and Finn?
8
Why is Poe Dameron so shocked in the First Order star destroyer hangar?
14
What were the cylindrical structures Rey was salvaging from in the Star Destroyer?