How certain are we about the results when Kylo Ren sees Han?

(I apologize for so many spoiler tags... I suggest staying away from this question entirely before seeing The Force Awakens.)

In what is probably considered to be the most pivotal moment of the movie, we are led to believe that...

However, what I recall seeing is...

Kylo appears to have impaled Han, as we can see the top of Kylo's blade behind Han. Han clearly isn't liking it much, and then we see him fall off of a platform. Later, we see Leia flinch when we can presume that Han got the lights knocked out of him (by impacting whatever he lands on). Note that Leia could also feel when Luke was in danger and needing help to survive.

The movie seems to imply a complete conclusion. I also think that out-of-universe comments by key people seem to also indicate that current interpretation. However, we all know how much we can trust Hollywood. Heck, even in the clear-cut case of actual on-screen death, we may never know, as clearly proven from this quote related to James Cameron's (first) Avatar movie.

actor Stephen Lang has hinted that Colonel Quaritch could return for a sequel: "You think those two arrows in my chest are going to stop me from coming back? Nothing's over so long as they've got my DNA." [source]

So, it's quite clear that we can never trust Hollywood. Even within the same series, Star Wars showed us that

Obi-Wan Kenobi may appear after being sliced. Although, in this case, the character did "disappear". Yoda's demise does indicate this means death.

The only supporting evidence I've come up with is that RotJ's Emperor seemed to be "done with" after his final contact with his servant, so falling like that has some precedent of being conclusive. However, given the transformation that Anakin had, which caused him to start having the figure that people typically think of as Darth Vader, the 30-year old Empire has demonstrated substantial medical abilities. If Snoke directed General Hux to do such a thing (clearly without the attacker's current knowledge), what are the chances that the ill-fated character may still be drawing breath? Or, if that seems too speculative to be answerable: how capable would the opposing army be, to try to save the specified life?

Han's last moment is looking into his son's face. HAN'S KNEES BUCKLE. The blade tilts down with him... until KYLO REN EXTINGUISHES IT AND HAN HOLDS onto the catwalk -- his life slipping away.

and from the film's Junior novelisation

In the last few seconds of his life, he thought of the Falcon and his furry first mate and his beautiful princess, but he saw only his son. The darkness in his eyes. And the sadness.

and from the film's official novelisation

Accepting without quite believing, Han stared back into the face of the creature that had been his son. There was nothing to see there. Only darkness in the shape of a face: alien, unthinking, unfeeling. His knees buckled, the beam tilting down with him as he crumpled. Ren extinguished it. For another moment Han held on to the edge of the walkway. A rush of memories flashed through his mind: worlds and time, friends and enemies, triumphs and failures. Words he wished he had spoken and others he regretted. All gone now, lost in an instant, like the one he would never again be able to hold in his arms. Then he fell, to vanish into the depths.

Also it's worth noting that Leia senses

Long before we had this title, the idea of The Force Awakens was that this would become the evolution of not just a hero, but a villain. Star Wars had the greatest villain in cinema history. So, how you bring a new villain into that world is a very tricky thing. We knew we needed to do something f--king bold. The only reason why Kylo Ren has any hope of being a worthy successor is because we lose one of our most beloved characters.

“It’s this massive tradeoff,” Abrams said of Han Solo’s death. “How can we possibly do that!? But… if we hadn’t done that, the movie wouldn’t have any guts at all. It felt very dangerous.”

“All of us bring our own experiences to it [parenting],” Abrams said. “As a father, as a friend to people who have children, I know what it’s like to see struggle, to be part of struggle. I know how painful it can be. I know how real it is. And this is, of course, an insane extrapolated version,” he added with a laugh. “Patricide1 is not ideal.”

In the same interview, co-writer Michael Arndt says much the same thing:

I had thought Han’s story and Leia’s story was just about them coming back together. At the end of the movie they would have reconciled and gotten over their differences. And you would have said, ‘Okay, bad stuff happened, but at least they’re back together again'. J.J. rightly asked, ‘What is Han doing in this movie?’ If we’re not going to have something important and irreversible happen to him, then he kind of feels like luggage. He feels like this great, sexy piece of luggage you have in your movie. But he’s not really evolving. He’s not really pushing the story forward.

Of course, Harrison Ford has been very vocal about the fact that he wanted this to happen as far back as Return of the Jedi:

It was a long time ago in a galaxy far, far away...I thought the best utility of the character would be for him to sacrifice himself to a high ideal and give a little bottom, a little gravitas to the enterprise, not that there wasn’t some already but I just wanted in on some part of it. That was at the third occasion of filming the original three.

This interview is one of many in which he said this.

The script also describes the event in pretty concrete terms, leaving little room for doubt that it was for real:

Han actually smiles -- and reaches out for the dark weapon -but with the light now gone, KYLO REN'S EYES FILL WITH DARKNESS, HE IGNITES THE LIGHTSABER -- THE FIERY BLADE SHOOTS OUT, RIGHT THROUGH HAN'S CHEST AND BACK!...

Han's last moment is looking into his son's face. HAN'S KNEES BUCKLE. The blade tilts down with him... until KYLO REN EXTINGUISHES IT AND HAN HOLDS onto the catwalk -- his life slipping away.

Finally Han FALLS BACK, OFF THE CATWALK, INTO THE DEPTHS OF THE STRUCTURE!

Leia, feeling it instantly -- knowing -- drops into a seat, DEVASTATED 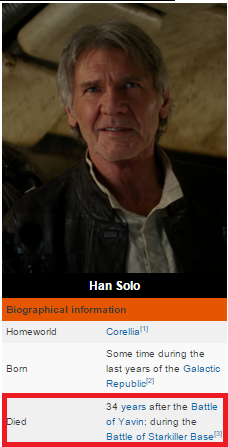 Finally, look at how the scene plays out, and what comes after it:

Han is impaled, and then falls out of sight, the structure he was in is blown to smithereens moments after he falls, and minutes later, the entire planet blows up. As far as we know, the Millennium Falcon is the only vehicle that could possibly have carried him to safety if he had survived the lightsaber wound AND the fall, and it quite clearly didn't do so. Chewbacca, who would presumably have done anything and everything possible if he believed Han was still alive and might be saved, doesn't try to find him - he simply shoots Ren, then blows up the very structure in which his best friend (really, his brother, for all intents and purposes) was last seen. Han would have needed to survive the stabbing, survive the fall, AND walk out of the facility within seconds of hitting the ground, in order to make it out alive. I just don't see any way he could have done that.

1 For those who aren't familiar (no pun intended) with the word:

Patricide:
pat·ri·cide
ˈpatrəˌsīd
noun
the killing of one's father.
a person who kills their father.
- Source

Out of universe, Harrison Ford wanted to kill Han Solo since the 3 original movies. I find it very unlikely that he would agree to be ressurected**

Not the answer you're looking for? Browse other questions tagged star-wars the-force-awakens kylo-ren han-solo or ask your own question.

29
How can Kylo Ren recognize this item?
9
How does Han Solo call Kylo Ren?
23
How old are Kylo Ren and Rey?
1
When did Kylo Ren turn to the dark side?
7
Where's Vader's mask at the end of Force Awakens?
11
How did Kylo Ren get to the forest so quickly?
6
Does Han Solo know what is going to happen when he encounters Kylo Ren on the bridge?
5
Why didn't Kylo Ren detect Han Solo on Takodana?
5
Why doesn't Kylo Ren sense that Han Solo is standing behind him?