Is Principal Wood inspired by Blade?

In Buffy we meet school principal Robin Wood who ends up fighting vampires. I started wondering if he was influenced by the Marvel comic book character Blade. Blade also fights vampires, and the two vaguely resemble one another in outward physical appearance and build.

It certainly wouldn't be the first (or even the hundredth) reference to popular comic book characters in Buffy. Have those involved with making the show commented as to whether Wood was based on Blade? 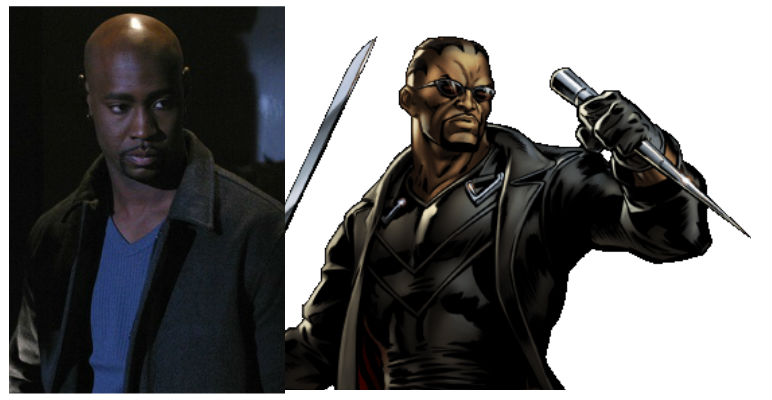 Yes, absolutely he was. Whedon cites "Blade the Vampire Slayer" (and specifically The Tomb of the Dracula) as one of the key influences in the development of the characters of Robin and Nikki Wood. He and Doug Petric are on record as being chuffed to bits that they actually got Gene Colan (the co-creator of Blade) to pencil a later Buffy comic in 'Tales of the Slayers #7':

Westfield: Can you say anything more about the Tales of the Slayers book?

Whedon: We don't have a date for it, but we talked about this when we were shooting the seventies flashback of Spike killing a slayer on a subway. I said to Doug Petric, who's one of my writers and who's written some of the Buffy comics and is, like me, a comic book nut, "God. We should do a compendium of stories of slayers throughout history." And he was like "I get to do the seventies slayer on the subway." He's actually doing it with Gene Colan. There was so much of the original Blade and Tomb of Dracula in that whole sequence. We were so into that. We pitched that to Scott and he was all over it and it turned out that practically my entire staff wanted to do it. They all picked an era and we talked about length and I'm doing three little pieces in it myself. It's a different artist for every piece and we're getting some really exciting people to

Interestingly, Robin Wood's character seems to have been heavily shaped by (and possibly named for) the archetypal "haunted warrior" described in the seminal 1979 essay "An Introduction to the American Horror Film" written by film critic Robin Wood, something that remains essential reading for all students of film and was almost certainly the reference point for Whedon's development of Buffy and the later "Cabin in the Woods".

Not the answer you're looking for? Browse other questions tagged marvel buffy-the-vampire-slayer character-similarity or ask your own question.

4
Is Beast a Secret Avenger or is he a Vice Principal?
4
is Psylocke's Psi Blade visible to others?
2
Was Gordon Walker based on Blade?
0
Was Soos inspired by Hurley?
4
Why did Principal Wood bury Jonathan?
3
Did Blade also have vampiric mental powers?
6
Was Groot inspired by Tolkien's Ents?
20
Which city is "Blade" (1998) set in?