How does BB-8 move in the sand without skidding?

In @StarWars #TheForceAwakens, BB-8, a smooth rolling metal spherical ball, would have skidded uncontrollably on sand.

Is this ever explained in-universe?

How was BB-8 able to travel through the sand without skidding?

That BB-8 droid actually works, as it was an actual prop that was used for actual filming, on actual sand. Even though Neil deGrasse Tyson says it will skid uncontrollably, we know that it does not.

The proof is in the pudding, and comes straight from a horse's mouth (if Mark Hamill were a horse):

That said, we also have NASA pointing out in this article that it is a poor design:

"Looking at the BB-8 droid I would have to say the physics, it doesn't follow particularly well," Kennedy said in a video for Wired. "Trying to roll up and over anything is extremely difficult."

It is also worth noting that the Sphero BB-8 toy does not work on sand:

The first is really really up for grabs - while BB-8 looks pretty round and smooth, remember he's really made up with different plates which have ports, crevices, etc. It also assumes that a robot equipped with grappling hooks to steady itself in flight doesn't also have some kind of tread or cleats for traction that we might not even notice due to BB's speed in the scene.

The second is questionable from scene to scene. In the scene where Rey finds BB it looks like dune like sand which can be tricky even for bipeds. In the scene around the trading post, it appears well packed and would be easy to traverse for a sphere (which, as a physical prop, BB-08 proves himself).

This Popular Science article has some discussion of how they implemented BB-8.

"So we came up with seven versions for the film—three main ones and some variations. ... One was the wiggler. It didn’t roll around, but it could wiggle its head and body on the spot. We would bolt that to the set or bury a baseboard in the sand. Then we built the trikes because we needed a stable driving version. We motorized the ball and had the head move around on top by means of a curved track system. Motorized castors on the back allowed us to steer it. That version could go over pretty much any terrain. The only thing that defeated it was deep, very fine sand. And then there was the puppet, which had an axle going through the ball, rods coming out, and a track system for the head. A puppeteer in a blue or green suit would hold the rods, and have very fine control over the head and ball. That’s how we achieved some of the more-subtle acting shots."

So Tyson is probably correct that a robot that was constructed, in reality, just as BB-8 is depicted onscreen would have trouble.

TL;DR: He was able to move in sand without skidding because there was much more to some versions of BB-8 than we see onscreen.

One version of BB-8 has a trolley attached to give him traction, and moved across a hard surface covered with a thin layer of sand, rather than across loose sand; another version of BB-8 is pushed from behind by a puppeteer.

Note: All photos are screencaps from the behind-the-scenes featurette Secrets of The Force Awakens: A Cinematic Journey

We can finally answer this question, thanks to the bonus materials on the newly released home video edition of The Force Awakens.

There are several versions of BB-8. At least one of these is a functional remote controlled device, but it seems that the functional version was not used as-is when BB-8 has to move over sand.

We came up with seven versions for the film — three main ones and some variations.
- Josh Lee 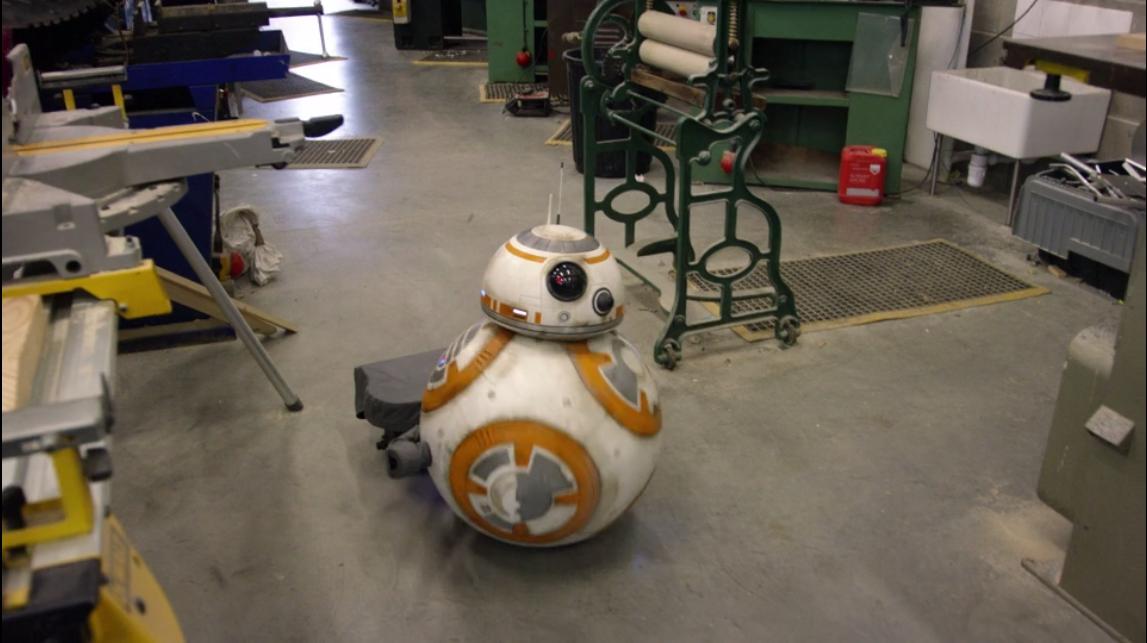 Trike version of BB-8, with the trolley mounted behind his body

This model of BB-8 has a wheeled grey cart or trolley attached, either in front of his body or behind it; Josh Lee calls this BB-8 the "trike" - short for "tricycle". The trolley is designed to give him some more traction.

We built the trikes because we needed a stable driving version. We motorized the ball and had the head move around on top by means of a curved track system. Motorized castors on the back allowed us to steer it. That version could go over pretty much any terrain. The only thing that defeated it was deep, very fine sand.
- Josh Lee

In the behind-the-scenes featurette Secrets of The Force Awakens: A Cinematic Journey, we can see that in at least one scene, he isn't moving over a dune of loose sand - he is actually rolling over a thin layer of sand spread over a hard surface, perhaps a board. 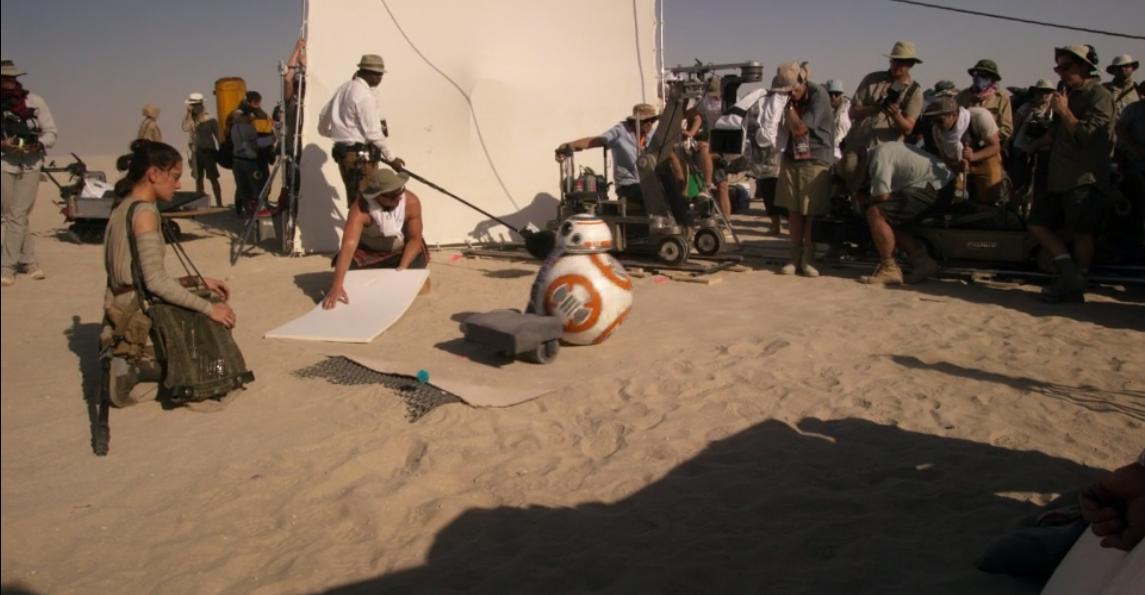 Trike version of BB-8, with the trolley mounted in front of his body - note the sand-covered board he is rolling across 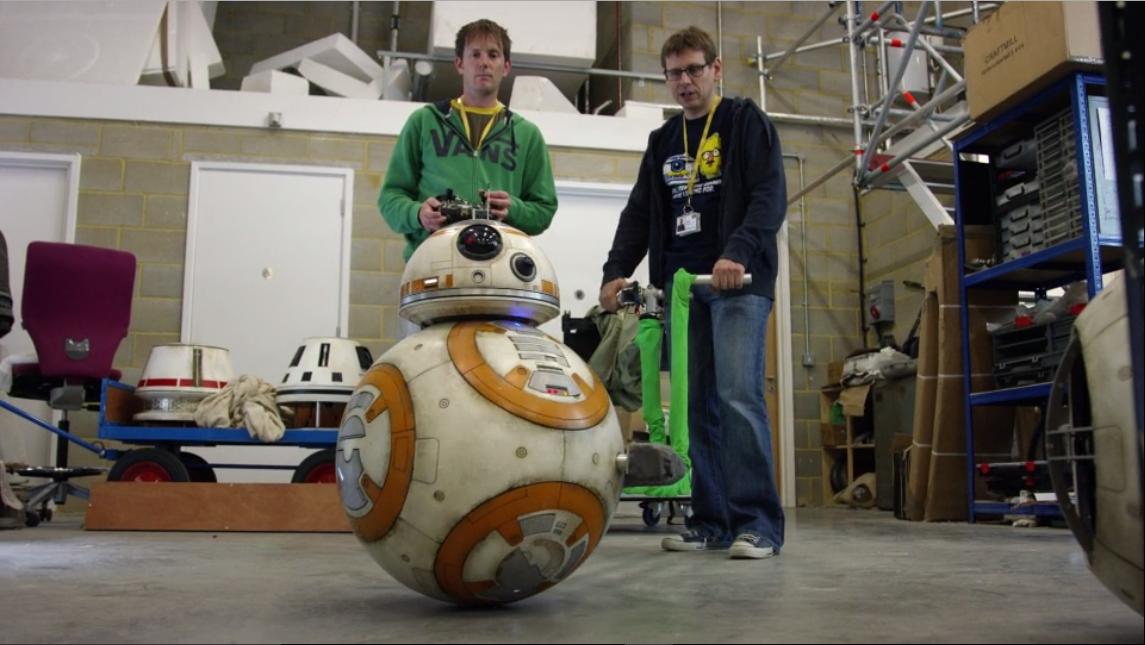 Rod puppet version of BB-8 in the studio

One of the puppeteers who worked with BB-8 described this version as a "rod puppet", because it is manipulated via two articulated poles wrapped in green screen material and attached to his back. This version is the one used in the scene where we see BB-8 speeding across the desert (the footage of which was used in the early trailers).

And then there was the puppet, which had an axle going through the ball, rods coming out, and a track system for the head. A puppeteer in a blue or green suit would hold the rods, and have very fine control over the head and ball.
- Josh Lee

In short, this version of BB-8 can move across the sand without skidding because there is a puppeteer (also wrapped in green screen material) pushing him from behind.

These photos show the filming of the scene in question: 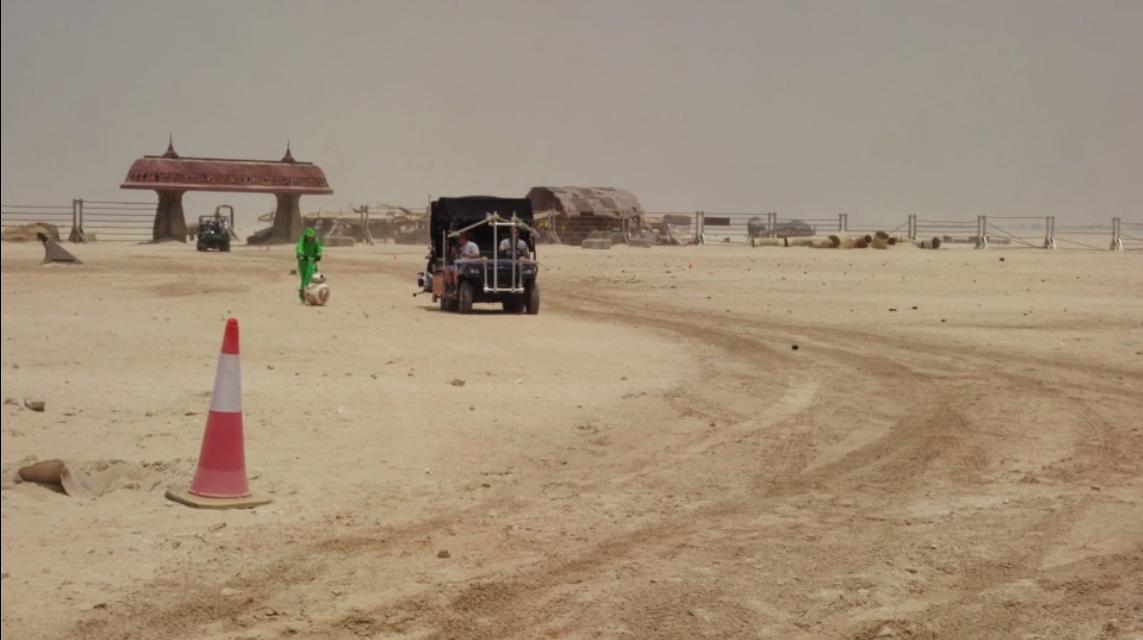 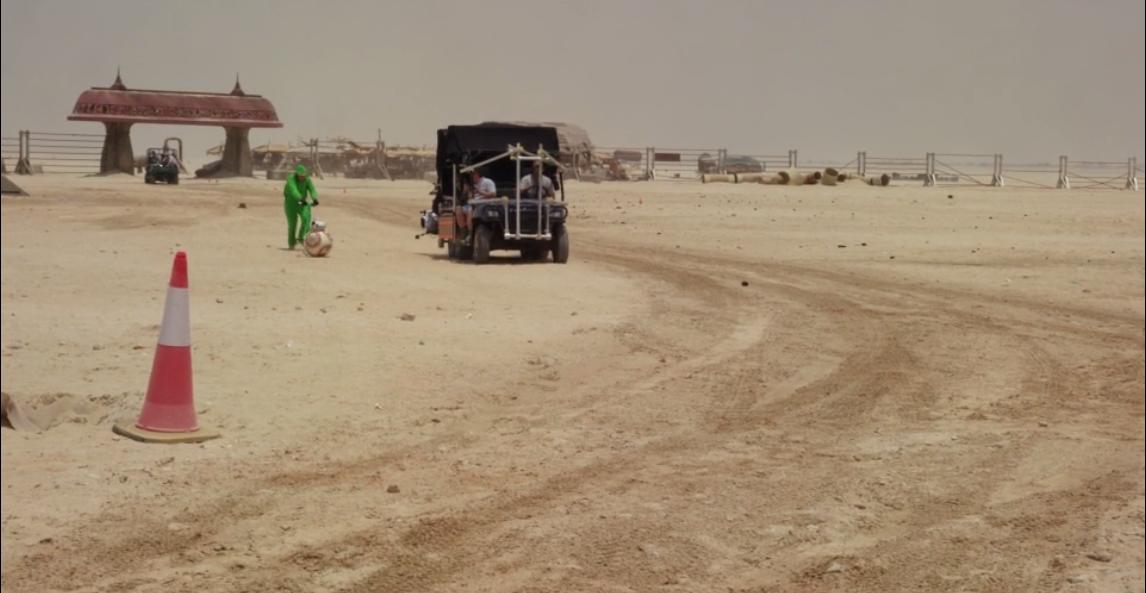 And these photos show the filming of the scene in which Rey first meets BB-8: 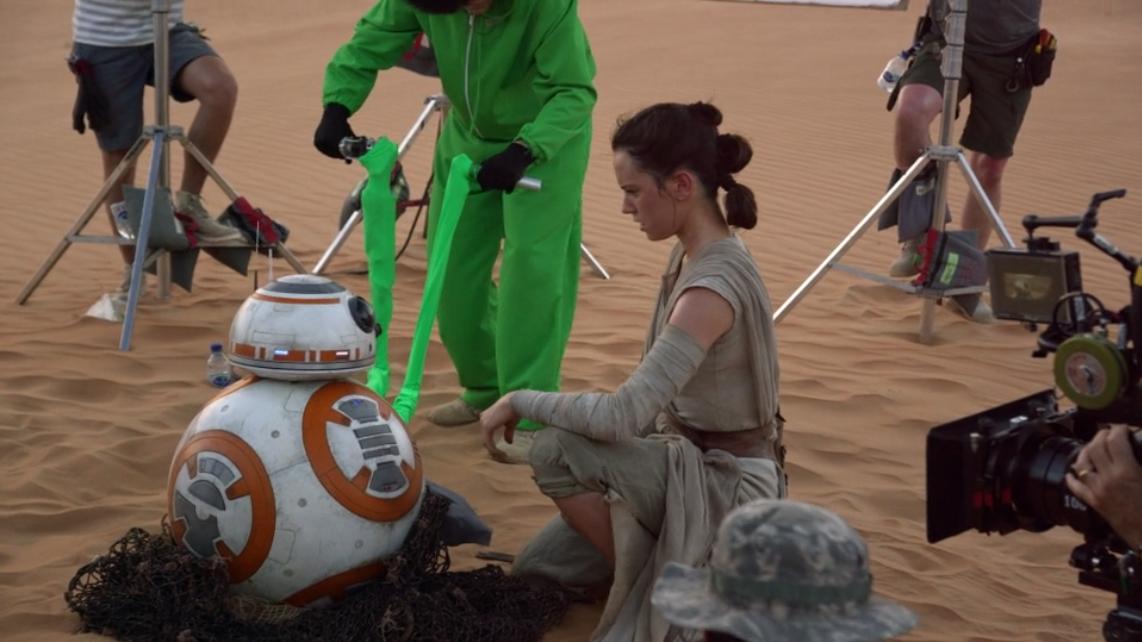 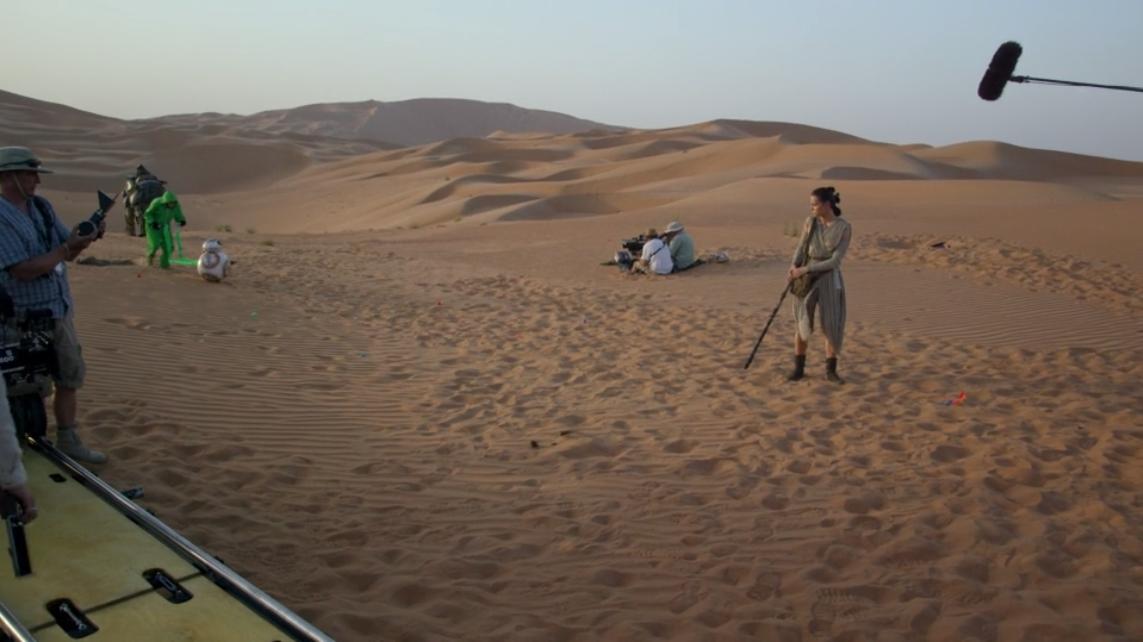 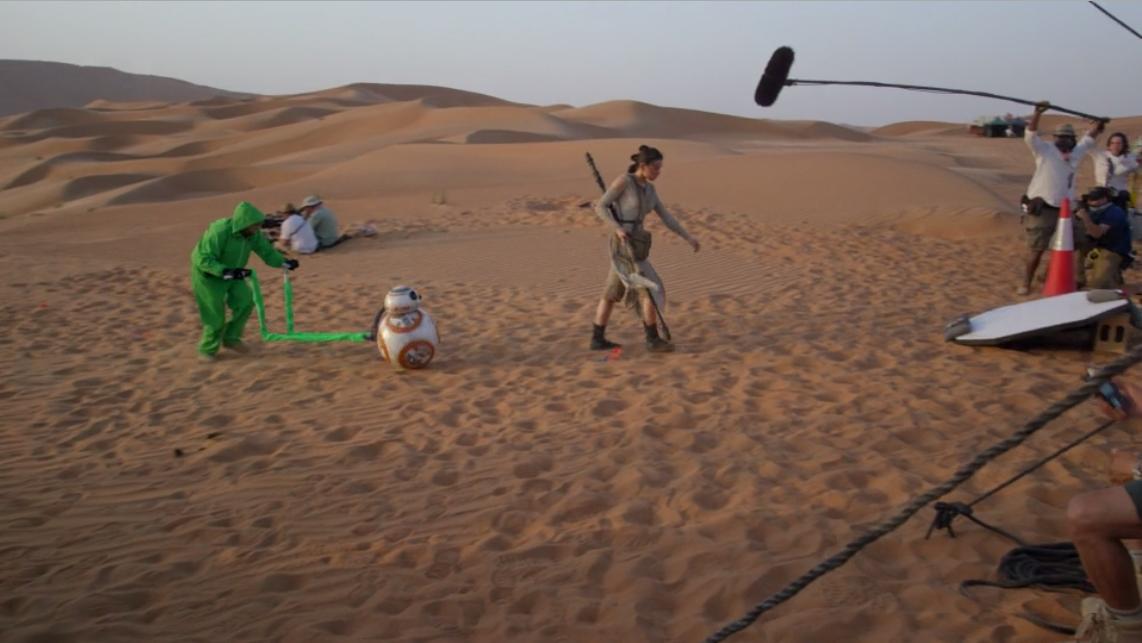 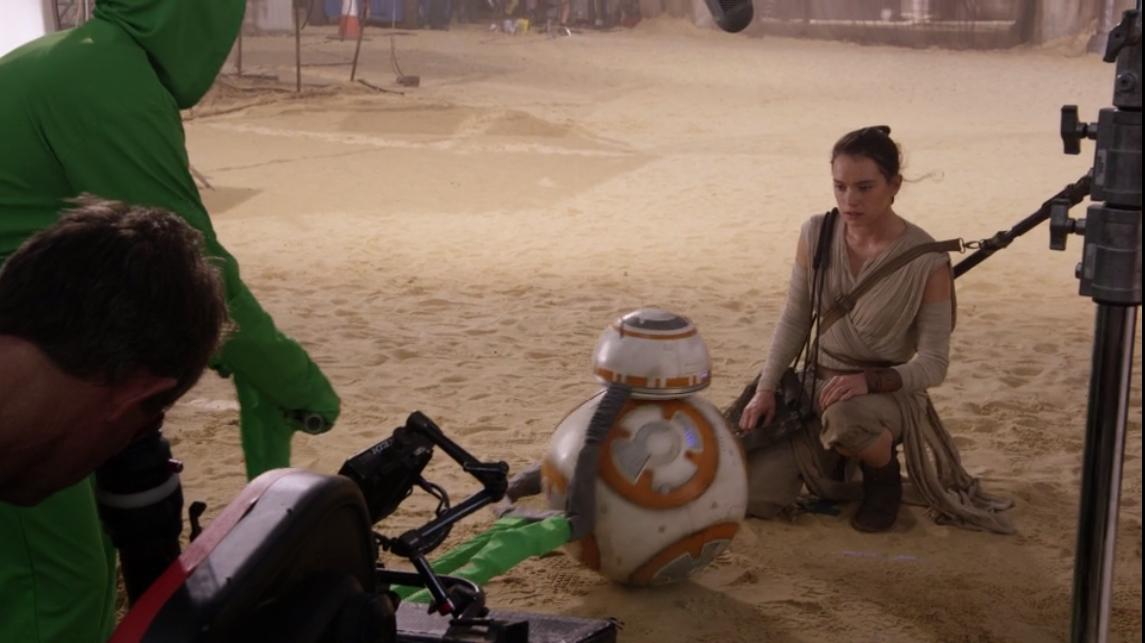 People tend to think of metal as perfectly smooth and not subject to deformation, but even if you take a perfectly smooth piece of stainless steel and put it on a sand hill, it rolls down the hill, it doesn't just slide. There is still significant friction between the irregular sand grains and the smooth metal surface.

This is enhance by the texture of the sphere, and the paint. For instance, you could use a smooth enamel or even teflon paint and reduce the friction, or you can use a softer rubberized or plastic paint with a minutely rough texture to increase friction on a variety of surfaces.

Without a microscopic analysis, though, it would be hard to determine the friction between the robot and sand. The sand grains are small and don't show up individually on screen, and thus the resolution of the camera isn't good enough to tell us in the surface of the robot interlocks, or slides, against those grains.

If the robot were instead on a planet of 1" (2.5cm) diameter ball bearings, then we could draw such conclusions. In fact I'd go so far as to say that as it appears on screen, the robot would have a very difficult time in such an environment.

But without further detail, we cannot discern the amount of friction between the surface and the robot.

Notably, though, we do have footage of it moving. I don't have the time to sit down and analyze it, but one sign that the robot has difficulty would be if we see it accelerating and decelerating on the sand onscreen. If it has difficulty, it would do so slowly. It wouldn't change directions very quickly. If there are jump cuts when it's about to change direction, or accelerate/decelerate quickly, that's a sign the robot is having difficulty.

Lastly, there were several purpose-built R2-D2 props used in the early films, and I fully expect several BB8 props exist for different scenes. They will no doubt have differing abilities on the sand.

But most of the friction will be defined by the coating and texture of the material that covers the sphere.

Do keep in mind, however, that the head has to slide and maneuver around with little friction on that same surface, so there's a balance that must be maintained between higher friction on driving surfaces, and lower friction on the head, with the sphere maintaining the same surface coating and texture for both.

It could be possible that his mass created enough friction between him and the sand. Just a thought. He would have to be pretty heavy though. But in all actuality, I couldn't see him climbing a steep dune with his design, along with going up stairs, with any type of ease. He would have to roll at a high speed for both of the obstacles.

Not the answer you're looking for? Browse other questions tagged star-wars the-force-awakens droids bb-8 or ask your own question.

25
Was the original Enterprise truly the first sci-fi spaceship designed purely for exploration?
28
How does BB-8 climb stairs?
11
How much was accomplished with the practical BB-8 prop?
2
What is BB-8's power source?

41
Why do calculations need to be made before jumping into hyperspace?
33
Why does Poe Dameron leave Jakku without BB-8?
28
How does BB-8 climb stairs?
19
Which predictions of the Force Awakens: Darths & Droids Bingo were correct?
7
How does BB-8 decelerate?
6
Does Unkar know the First Order is looking for BB-8?
7
What pulled the TIE fighter into the sand on Jakku?
28
What is the significance of the robot in the sand?
5
Did navi-computer technology dramatically increase between Ep. 4 and Ep. 9?