What is the Range of the Average Stargate?

I thought this had been asked previously, but I can't find it (so if someone else does, I guess they'll have to just close this question).

What is the range the average stargate can open a wormhole to? Can all the gates in the Milky Way reach each other, or are the ones on the fringe not able to gate all the way to the other side?

As someone pointed out, Milky Way gates, Pegasus gates, and Destiny gates may have different ranges, so the numbers may differ for the three types of gates.

For the Milky Way and Pegasus, any gate can connect to any other gate within that galaxy's network without boosting. But the Destiny Seeded Gates seem to be limited range similar to the distance Destiny can travel in one jump. One would assume the gate on Destiny would be as capable as the Milky Way or Pegasus gates, but that is never fully explored.

As far as traveling beyond the local network to a nearby one, or beyond, you need more power and an additional distance measurement. For the two nearby galaxies Pegasus and Ida you just need a 7th chevron and a sufficient power source. Ida, the home of the Asgard, is fairly close and it's power requirements are fairly low, O'Neill with the Ancient knowledge was able to create a device using a Staff Weapon's Naquadah powercell to step up the base power and supercharge the gate. As for Pegasus it needs a powered ZPM to boost the gate power, or possibly the 80% US power output mentioned in The Road not Taken.

The McKay/Carter Intergalactic Gate Bridge gives us the best hints at the operating range of a stargate. It gets around the power requirement by placing a string of gates between the galaxies that have been reprogrammed to receive an incoming wormhole, store the dematerialized passengers, then open a wormhole to the next gate and forward the dematerialized passengers to the next in the chain, only materializing them at Midway Station.

Composed of 34 gates and spanning 3 million light years, we can estimate that the "safe" operating distance of an unboosed gate is approximately 80 thousand light years, or about the diameter of the Galaxy. It is possible that the range of the Milky Way gates is greater since the Milky Way is larger than Pegasus, there are more gates on the earth side of the route than on the Atlantis side. 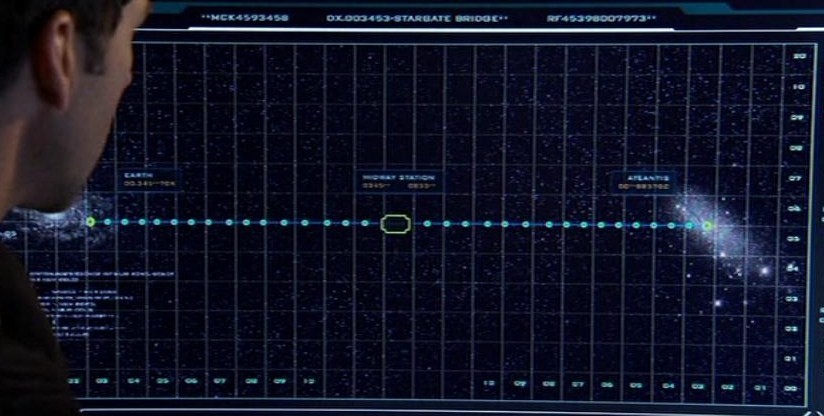 So really the answer for What is the range of the average stargate is it depends on the size of your galaxy and what the Ancients need the gates to achieve. It is a similar answer to How wide are the roads in the US. The Milky Way and Pegasus gates are sufficient to support a galaxy spanning civilization reliant on fast trade and convenient travel between distant points. For the Destiny gates, just enough to stop along the way and gather supplies as needed.

Milky Way and Pegasus Galaxy gates can gate to any other gate in their home galaxy while powered by a standard DHD. With more power, they seem to be able to cross significant portions of the universe, see the Stargate Universe pilot for this.

Destiny gates are shown to have much more limited range. They can cover roughly a fifth of a galaxy, where said galaxy's size was never stated on screen (SGU: Lost).

17
What is the Smallest Distance Possible that Two Stargates Are Able To Dial One Another?
8
Is there an upper limit on the range of a Stargate?

25
Why did The Ancients not include the remote dialing feature in the Milky Way Stargates?
13
How Do Stargates in the Milky Way Galaxy, the Pegasus Galaxy, and on the Destiny Differ?
14
How Could the SGC Dial the Destiny Without Knowing Where It Was?
6
How did the first off-world team know the return address for Atlantis?
24
Is There a Difference Between Entering an Active Stargate on One Side Or The Other?
17
What is the Smallest Distance Possible that Two Stargates Are Able To Dial One Another?
6
Are the Stargate glyphs different between Pegasus and Milky Way galaxies and how does it affect the DHD on puddle jumpers?
11
Why are Stargates in Stargate Universe “less advanced” yet have more advanced capabilities?
6
What is the rule for spinning the ring when dialing a Stargate?
16
Why are there so few ancient ships in the Milky Way?