In Transformers (2007), how did Megatron transform into a fighter jet?

I was recently re-watching the 2007 Transformers movie and a particular scene caught my attention. In the scene where Megatron comes back from the cryogenic or cold state back to normal state in his NBE 1 hangar, he immediately comes under heavy fire and is seen transforming into sort of a fighter jet and flying out of the hangar.

Now, the doubt that I have is that Megatron had been inside that hangar and in cryogenic state since 1930s. So how did he know what to transform into? As far as I understand (based on the movies) Transformers transform into different things after they have scanned them (like Optimus transformed into red and blue truck and Bumblebee transformed into the Camaro). Since Megatron was in captivity I am sure it did not see any fighter jets to scan inside his hangar. So how did he transform into the fighter jet right after he came back to normal form?

PS: I haven't read the comics so I am not sure if there is some explanation there.

According to the film's official novelisation (by Alan Dean Foster) it wasn't a jet fighter, it was merely jet-fighter shaped, perfect for escaping at high speed from the hangar.

As to how Megatron had managed to create one, given the unique design of the "alien aircraft", it's most likely that Megatron scanned it before setting off for Earth:

The bipedal shape contracted, flexed, flowed, and expanded. What condensed in its place was something like a plane, something like a jet fighter — but unlike anything the tech had ever seen before, except perhaps in the illustrations on the covers of certain magazines to which he subscribed.

Growling to itself, the alien aircraft pivoted on the debris-filled floor. Purple fire emerged from one end.

Turning away from the sight, the tech shut his eyes tightly and covered his eyes as the machine smashed through the towering blast door and disappeared down the access tunnel, leaving only a thunderous echo in its wake. 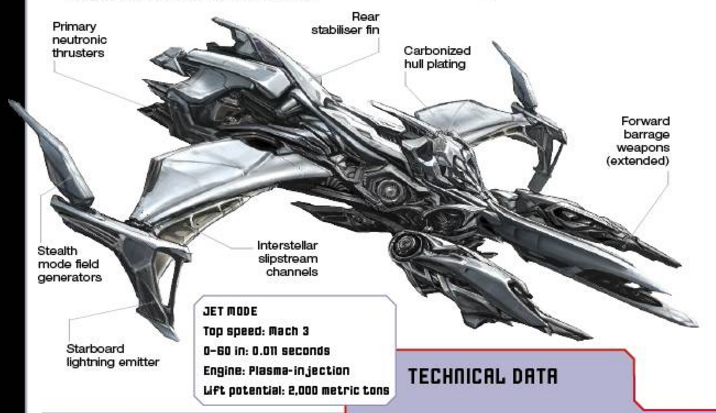 Not the answer you're looking for? Browse other questions tagged transformers transformers-2007 or ask your own question.