Why did Han own a training remote?

In Star Wars - Episode IV: A New Hope, Luke uses a training remote found onboard the Millennium Falcon as part of his lightsaber training. A picture on the Wookieepedia page for "Training Remotes" is captioned "Han Solo's training remote": 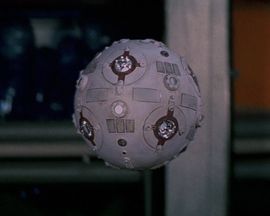 The remote remained aboard the ship for decades afterwards, and was discovered much later by Finn in The Force Awakens, while he is rooting around in equipment boxes.

I don't understand why a non-Force-user would have one of these devices around - it seems to be designed for use by Jedi learning to deflect blasters, and appears to have very little usefulness to anyone else.

Why does Han Solo own a training remote?

Luke stepped back to the center of the hold, activated his lightsaber, and returned his attention to the hovering remote. Ben had rightly assumed that Han kept a remote on board for quick-draw target practice, and had programmed the device to fire harmless sting bursts for Luke to deflect with his lightsaber. Luke kept his eyes on the remote and batted at two fired bursts as Han Solo entered the hold. - SW: A New Hope - Junior Novelisation 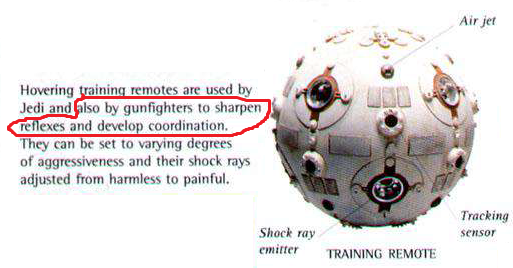 and from The Weapon of a Jedi: A Luke Skywalker Adventure

He realized his lightsaber was in his hand. And then he sensed something else. He looked up and saw three remotes hovering nearby—remotes like the one Han Solo had kept for blaster target practice aboard the Millennium Falcon.

Three? He couldn’t fend off three—he had enough trouble anticipating the actions of just one. But the Force was very strong there. He could feel it all around him, a living thing, like wind or rain.

Not the answer you're looking for? Browse other questions tagged star-wars droids a-new-hope jedi-training or ask your own question.

57
Why didn't Kenobi start training Luke earlier?
109
Why was Han Solo on Tatooine?
22
By the end of The Force Awakens, who knows about Kylo Ren's family?
6
Why did Han think he could tell what size the Death Star was?
12
What of Han Solo's pre-ANH past was revealed as canon prior to the release of Solo?
5
Where did the weapons on the Millennium Falcon come from?
7
Is the storyteller kid at the end of “The Last Jedi” Force-sensitive?
12
Which predictions of The Rise of Skywalker: Darths & Droids Bingo were correct?
3
Why did Han Solo's blaster shot bounce off the garbage compactor's walls?