Where did the sun's energy get sucked into Starkiller Base?

In The Force Awakens, when Starkiller Base is sucking in the sun's energy to charge up for destroying the Resistance, where does the energy enter the planet?

At first I assumed it entered through the same huge hole where it fires from, but in the scene where the X-Wings arrive to try and destroy the oscillator, there's a clear shot of the firing hole with no beam anywhere. There are a few shots where you see the beam of light from the sun, but it's not clear where it meets the planet.

According to the film's official novelisation, the 'dark energy' from the local star is channeled into gigantic "collectors" on the backside of the Starkiller Base planet. It's stored inside the core, then fired out through the big gun on the front:

Having been gathered in stages by an immense array of coupled collectors located on the other side of the planet, a tremendously compact volume of a type of dark energy known as quintessence had been accumulated at the center of the planet. Held in place inside a roiling molten metal core by the frozen world’s powerful magnetic field, augmented by the weapons system’s own containment field, it grew until there was nothing like it—nothing natural like it—in this corner of the galaxy.

For ease of reference, I've drawn a diagram: 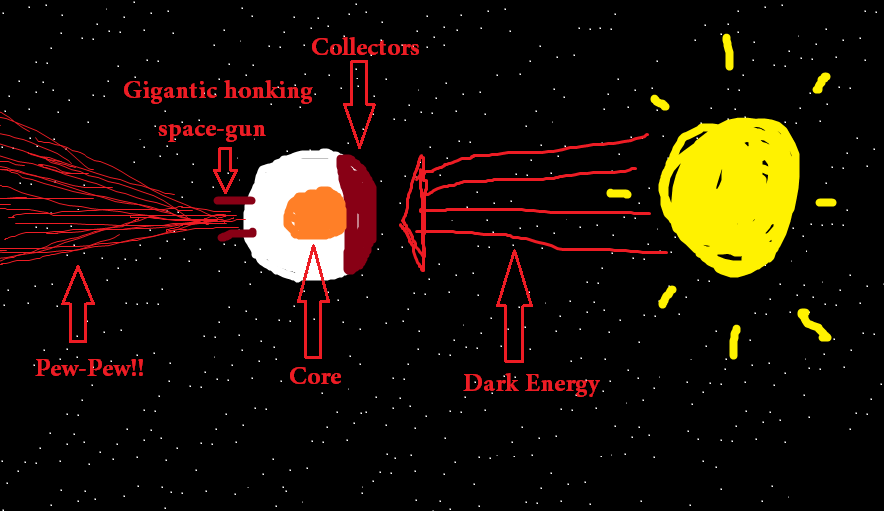 There was a large hole where the star matter was absorbed. If this is the same hole that it was fired from I do not know for sure, but I remember it being different.

Off topic:
For those who are having a hard time with the base's power source, yes it is impossible with current physics and legacy Star Wars physics, but apparently the Empire has found a way to pull the matter from a star (so lots of mass) into a smaller planets core, without pulling the smaller planet toward the star. They have also found a way to compact it enough to fit in the very small planet without the energy from compacting the gasses into such a small location and the resulting fusion causing the planet to explode. I do not like it, but I am happy that when they destroyed the planet (before firing) they remembered to put the star where the planet was. I just feel bad for all the planets in the solar system which will no longer have stable orbits.
Share
Improve this answer
answered Jan 7, 2016 at 2:46